When COVID-19 caused the closure of Cal Poly’s Rec Center and other gyms around San Luis Obispo, public health sophomore Sammy Eaddy began to work out at local parks. It was there, he noticed the alarming rate of unsheltered homeless individuals.

Eaddy decided to do something about it. Along with child development sophomore Olivia Boles, Eaddy started making care packages for the homeless community in San Luis Obispo (SLO).

His faith largely inspired this act of kindness.

“In my faith, I truly believe that our hearts should line up with the life we want to live,” Eaddy said.

For Eaddy, being able to provide for the homeless population living in SLO was the way for him to engage in the community and grow in his faith.

Director of Homeless Services at Transitions Mental Health Association (TMHA) Mark Lamore said that there is a significant amount of unsheltered homeless individuals in the entirety of San Luis Obispo county. Every two years TMHA collects data on the number of homeless individuals which typically ranges from 2,000 to 2,300 people. However, Lamore says the number is likely much higher.

The average homeless individual he works with has been homeless for approximately 10 years and makes anywhere from $0-$1,000 in income every month, and many receive some kind of federal funding. These low incomes make it nearly impossible to procure independent housing

“The reason that we have homeless in the county is probably like any other county — affordable housing is the biggest issue,” Lamore said.

Lamore stressed the importance housing insecurity should have to the greater community.

“It’s a community problem, and I think it’s something we all should be aware of and get involved at whatever level we’re comfortable doing that,” Lamore said.

“It’s something that is not really talked about when people are advocating for you to go to Cal Poly,” Zordilla said.

Going downtown, it was always difficult for her to enjoy herself knowing that there were people on the same streets struggling and starving, she said.

Zordilla, a member of the pre-dental society, decided to use her background and passion for dentistry to aid the homeless population. She makes care packages containing oral care for the community.

She began volunteering at the homeless shelter 40 Prado when she moved to San Luis Obispo and began to create deep connections with the individuals. She also became aware of the need for dental hygiene products for both sheltered and unsheltered individuals who face housing insecurity.

“There’s a huge homeless population that isn’t getting access to basic necessities that actually live on the street,” Zordilla said. “I guess I just wanted to introduce them to oral health through my passion for both helping the homeless and dentistry.”

Amid the ongoing pandemic, Zordilla wanted to prioritize the health of unsheltered people.

“Health and safety is being really prioritized right now and if I am able to contribute to the health and safety of homeless people by promoting their oral health then it makes me feel good,” Zordilla said. “These are scary times and I can’t imagine how people must feel right now that are living on the streets.”

Zordilla said she thinks Cal Poly students should get involved in aiding the homeless because there is an obvious discrepancy between the living standards of Cal Poly students and those less privileged in the community.

“I think I just feel really privileged to be here and to live the life I do and I want to help people that I see around me that may not be having as easy of a time,” Zordilla said.

“It shows the power in recognizing one’s own privilege to be able to help,” Boles said.

She and Eaddy add cards to the care packages. Boles said she knows that kind words can always be a helping force for people. 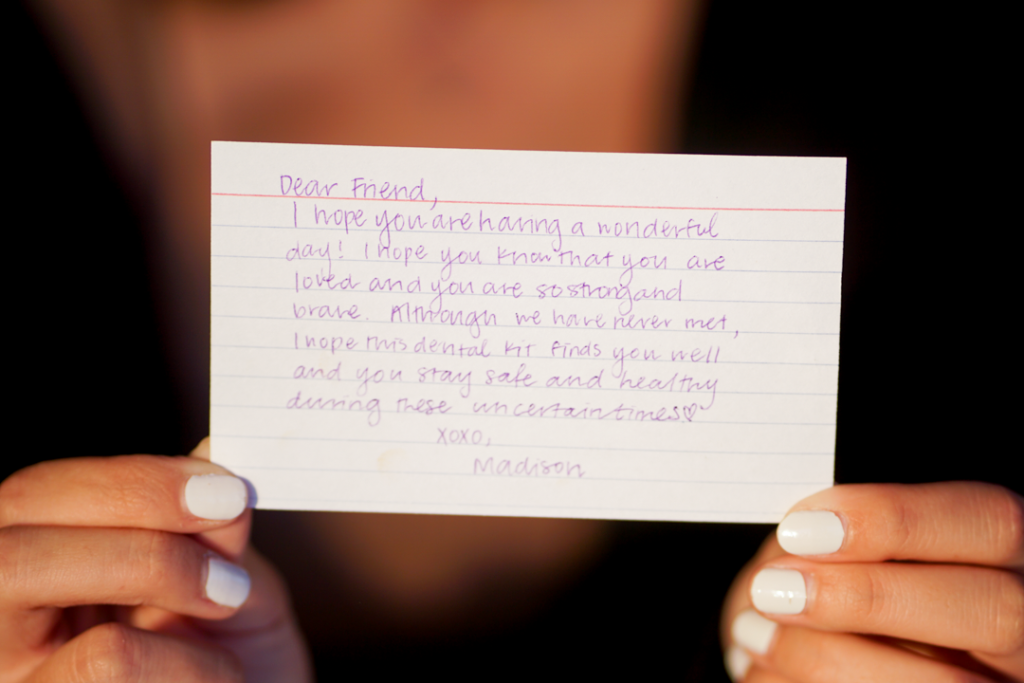 “There’s a lot of bad things going out there, but you can do so much to help people nowadays just in little actions,” Boles said.

Eaddy said when he and Boles hand the care packages to an unsheltered individual he leaves them with this message: “This is from me to you. Love is such a healing force. I am here for you. You are loved. You are needed in our community.”

Eaddy has made it his mission for this year to serve the greater community of San Luis Obispo.