Wander past the rock pathway bordering O’Neill Green and this hidden gem would be easy to miss. It’s just a slight break in the foliage, but if one finds it, you are transported to a whole new place.

It’s just one of the many secret gardens that Henry Hilgert has nurtured in his 36-year career.

O’Neill Green is the official name of the area, but this groundskeeper sees it a little differently. Hilgert jokingly said that may not be the most fitting moniker.

“It really should have been called the Henry Hilgert Area,” he said.

For the past 36 years, Hilgert has been the puppeteer pulling the strings behind Cal Poly’s shifting landscape, specifically the areas surrounding Business (building 3), Cotchett Education Building (building 2) and Architecture and Environmental Design Department (building 5). He’s not only planted trees, he’s planted memories. But first, let’s trace back to his roots. Hilgert grew up in Madison, Conn. where he got his first job working at a nursery in high school. At just 14 years old, Hilgert discovered his love for gardening.

“I like being outside. I would be a bad caged animal … I just have to be outside,” Hilgert said.  “That’s why I moved from Madison to California, so I could be a gardener year round, and San Luis is like the ideal place.”

After spending two years studying agriculture at the University of Connecticut, Hilgert transferred to Cal Poly in 1979. Within nine months of being at Cal Poly, Hilgert became a full time worker. He was able to finish his ornamental horticulture degree on the Fee Waiver Program, which allowed him to take one class per quarter while working.

Despite his upbringing on the East Coast, Hilgert wanted to stay in a place where he could fulfill his love for gardening. When he graduated in 1986, Hilgert officially planted his foundation at Cal Poly.

Gardening for Hilgert is not just a job, but a lifestyle. He and his wife live in Garden Farms, which was originally a garden community for the city of Atascadero, where Hilgert tends to his vegetable and flower gardens.

Now from Tuesdays to Saturdays starting at 6 a.m., Hilgert can be found whizzing around on his golf cart around campus attending to the needs of every area.

Despite his widespread maintenance around campus, Hilgert has focused a lot of time and energy to O’Neill Green — specifically the Rose Garden, Remembrance Pond and California Natives. 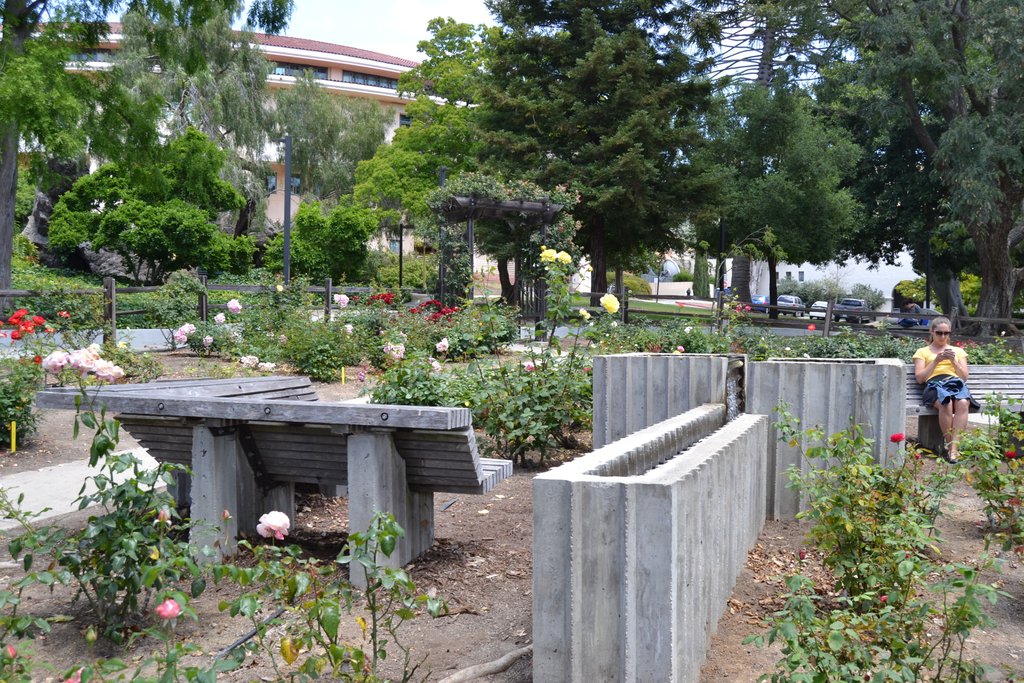 One can catch the fragrant smell walking past the stadium to see rows of roses — yellow, white, red, pink.

What was first planted back in 1964 as the original Rose Garden has been expanded over the years. In the late 1980s, Hilgert led a project to redesign drainage and add in sidewalks and paths around the garden. Working in collaboration with construction management students, Hilgert helped them install the water feature and benches in the center of the Rose Garden.

Not only is this garden aesthetically pleasing, but it is also used by the Horticulture Department as an instructional space for students to learn how to prune roses.

Hilgert must maintain the roses from the elements as well worry about unlikely pests: deer, which is why he wants to put in a deer fence.

“The problem is that in the last 10 years or so, the deer like to come down in the summer and eat the roses,” Hilgert said. “The roses don’t even have a chance to bloom because they just get eaten down.”

While maintaining the roses for its beauty is a big component, Hilgert also wants the garden to be a showcase.

“A lot of times I will just be here sitting and I can watch people come through and hear them talking,” Hilgert said. “That makes me feel good that they are enjoying my work because that’s basically what it is: creating an outdoor space that is aesthetically pleasing to people and that’s the reward.”

Facility Services Director of Strategic Operations Scott Loosely sees the connection that Hilgert has with his gardens.

“Henry is a real character. Don’t ever try to pick a rose in his garden because you’ll look around and you don’t see him anywhere,” Loosely said. “Suddenly, he’s just there ready to protect his roses.” 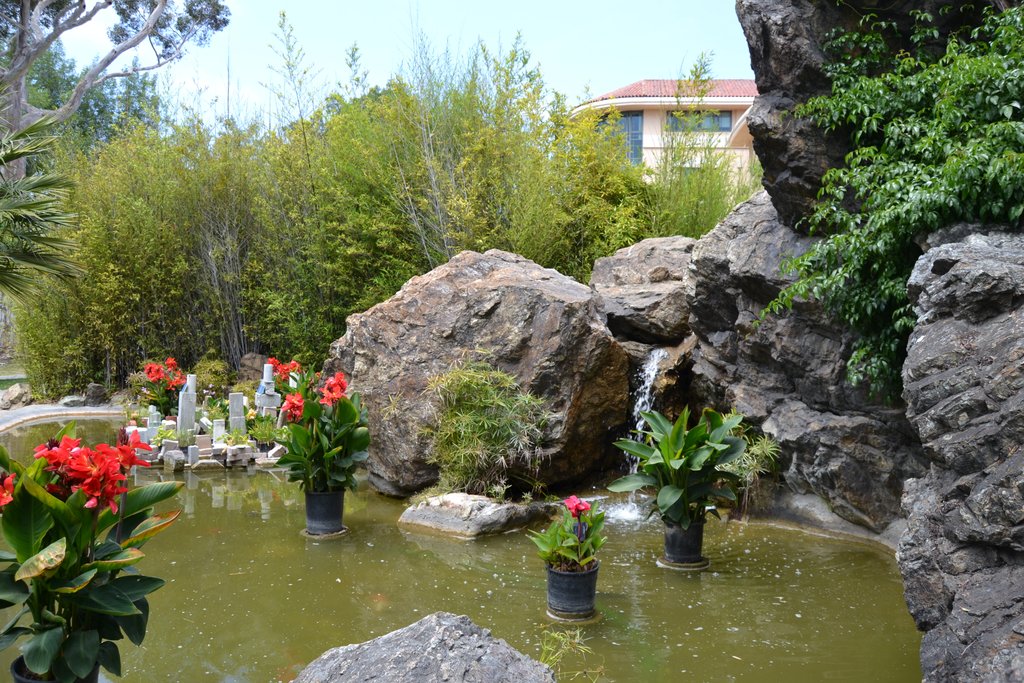 When the pond was originally created in the 1930s, it was overshadowed by the large, natural rocks surrounding it. However, after the passing of Ted Howes, the ornamental horticulture department head and instructor, students decided to revamp the pond in memorium of Howes.

Walking through O’Neill Green, the faint sound of rushing water can be heard behind the bushes. As you enter the path lined with tall stalks of bamboo, a new space welcomes you. A small waterfall pours into the pond as koi fish swim throughout the water. A turtle pokes its head up before quickly darting back below the surface. It provides a peaceful place to escape the daily stresses of school.

These improvements have been made throughout the decades: a waterfall to provide natural sound while koi fish swim freely through the water. Hilgert’s very own addition has been what he refers to as the “fish house shelter.”

“I took a bunch of cinderblock like material that forms a network of tunnels where the fish can go to be quiet and hide from birds who swoop down,” Hilgert said. “It was also a little too flat so I decided to add some vertical dimension and make it look like a little city.”

In order to make the water clearer, Hilgert has been using the Pondovac — a pond vacuum that essentially puts an enzyme in the water that attacks bacteria or algae, making it much easier to see the fish. 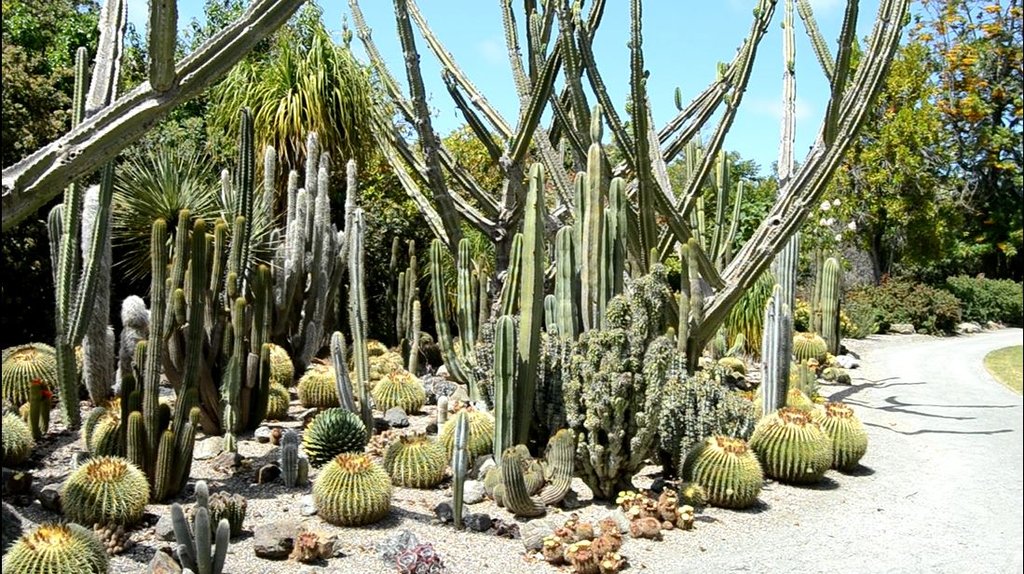 What used to be just a simple road and a parking lot has since been transformed into a garden and pathway.

Hilgert is constantly adding to his cactus collection because as it grows, flowers start to bloom. This is one of the reasons he has a far greater admiration for this garden over the others.

“The cactus garden, it’s my favorite, because it’s so rugged. The plants they can endure heat, drought but with a little bit of tension they go crazy, they get large,” Hilgert said. “When I originally started the cactus garden I didn’t foresee it being the way it is now: amazing.”

Hilgert wants to do more than just maintain the gardens. He wants to better the experience for everyone who visits Cal Poly. He’ll put labels in his gardens so that students can easily identify plants and their species. He will even conduct research on his areas and then work with his supervisor Ron Hostick to carry out his ideas.

“Henry is the consummate gardener; his ability to just care and nurture the plants and the pond is pretty amazing,” Hostick said. “We have a partnership where I provide him with resources and he makes sure those resources get used to their best ability.”

While these three areas have become Hilgert’s main areas over the years, his responsibilities are not limited to O’Neill Green.

Hilgert also maintains the courtyard between the Business and Education buildings as well as the area around the Architecture building. Since Hilgert had to forsake the English Perennial Garden on O’Neill, he has created a mini garden by Engineering (building 13).

His expertise is what has allowed him to win three Obispo Beautiful Award. While these awards are generally given to homeowners, the only requirement is that it can be visually seen from the street. San Luis Obispo awarded Hilgert in the 1980s and 90s for his gardens on O’Neill Green.

Loosely agrees with the city that Hilgert has proven himself as more than just a gardener.

“Henry’s been around a long time and at one point he and I had a discussion about the way he communicated and he referred to himself as an old curmudgeon,” Loosley said. “He actually has a kind of has a kinder, softer gentler side as well and he’s a really good guy very dependable and he has some of the most unique plants on campus.”

Hilgert’s love for his gardens will only continue to grow which is why he has no plans to stop anytime soon.

What does the future hold for Henry’s Gardens? With 36 years on the job, it’s something he admits is on his mind; he wants his legacy to last. But, for now at least, he has no plans to stop. For now, it will be Henry at the helm of Henry’s Gardens.