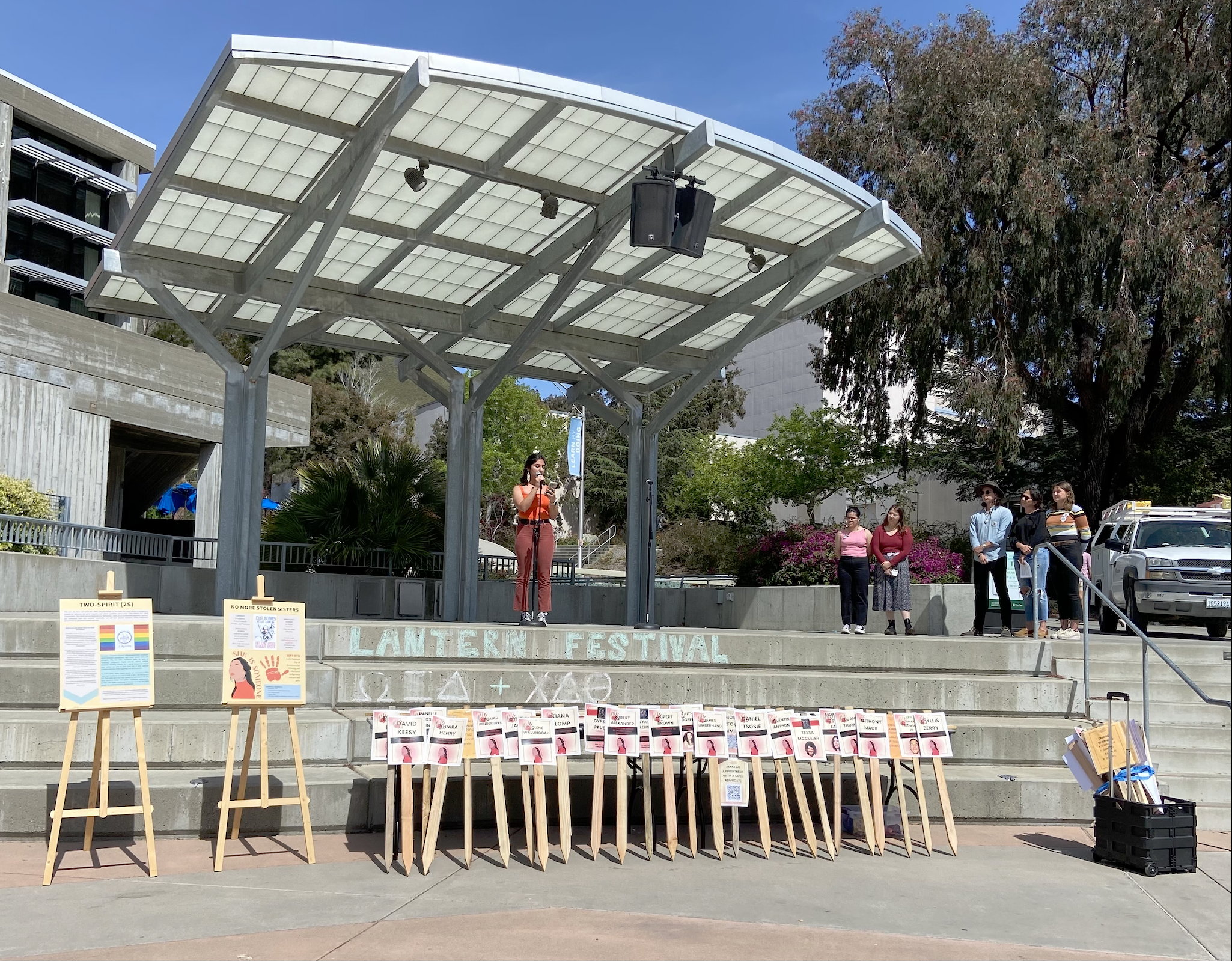 Ethnic studies professor Lydia Heberling had attended an event celebrating Indigenous inclusion in the new Burke Museum in Seattle, WA, where a member of the Duwamish Tribe created pins to give out to attendees. On the pin rests a ribbon made of cedar wood — used as a medicine in Coast Salish tribes — and red beads strung at the end. Heberling said the pin and the tribe’s event as a whole symbolized a “celebration of Indigenous power.”

Heberling donned this same pin at Cal Poly on Thursday, when the university’s Native American and Indigenous Cultural Center (NAICC) hosted an event to bring awareness to missing and murdered Indigenous people.

“I’m wearing it on my heart because this is a heavy day,” Heberling said.

This event was a collaboration by NAICC, the Pride Center, Safer and the American Indian & Indigenous Faculty and Staff Association.

May 5 of every year is recognized as Missing and Murdered Indigenous Persons Awareness Day in a proclamation from President Joe Biden on May 4, which is why, along with the fact that this is the NAICC’s first year being fully established, that this event was held now.

According to the speeches from Toussimehr and Heberling, this day was chosen nationally as it is the birthday of Hannah Harris, a member of the Cheyenne Tribe who was murdered in 2013.

“[Missing and Murdered Indigenous Persons Awareness Day] is something [the Cal Poly community doesn’t] know a lot about, but that’s slowly starting to change,” Heberling said.

Held from 3 to 4 p.m., speakers came to discuss missing and murdered Indigenous people, specifically how Indigenous people — especially women — go missing or are murdered at a disproportionate rate. These crimes are then underreported, the speakers said.

“Indigenous survivors of colonial violence are so much more than their trauma.”

“We rage because when we do, change happens,” Heberling said in her speech.

After these speeches, Heberling allowed for a moment of silence. Breaking up into groups, the crowd dispersed to the UU, the Yakʔitʸutʸu area, Dexter Lawn and the Health Center to stake signs they brought.

These signs listed the names of missing or murdered Indigenous people, some including their tribes and pictures, and an asterisk if they’re under 18, according to Toussimehr.

“Many of the women in my life have tragically suffered this fate,” agricultural and environmental plant sciences senior and current AISA president Alex Reyes said in regards to the importance of displaying the names of these victims.

In addition to the signs, there were also pins available and laid out that were designed by ethnic studies senior Haylie Searson. They had sayings such as “#MMIP, no more stolen people” and a red hand, the symbol of MMIP, with the statement “you are not forgotten” underneath.

“Many of the women in my life have tragically suffered this fate.”

“Even on campus, we don’t have a lot of notoriety,” Zamora said. “We want Indigenous students to feel heard.”

Also for MMIP awareness day, there was a keynote speaker from 11 a.m. to 12 p.m. and a sign-up only beading workshop from 5:30 to 7 p.m., which were both meant to honor and bring awareness to MMIP.

“Indigenous survivors of colonial violence are so much more than their trauma,” Heberling said in her speech.

Correction: This article was updated to correct information from sources and include more specific, detailed context.