Inside UCLA’s Pauley Pavilion, the electric atmosphere energized the Cal Poly volleyball fans as the Mustangs swept the Denver University in Cal Poly’s first appearance in the NCAA Tournament since 2007. As the Mustangs put away the final point, senior setter Taylor Nelson leapt into her teammates’ arms while her family celebrated in the stands.

More than 30 years ago, her mother Vera Nelson and her Cal Poly volleyball team accomplished a similar feat. That team made the NCAA Tournament in 1985 and advanced all the way to the third round.

For the Nelson family, the Cal Poly connection does not end there. Not only did both Vera and Taylor star for their respective volleyball teams, but both father Rich and son, freshman pitcher Darren, have played for Cal Poly baseball.

Both Vera’s and Taylor’s Cal Poly volleyball teams set many program records and gained national attention in the rankings. This season, Taylor and her teammates broke several of records initially set by her mother’s team.

The indoor team surpassed the 1985 Mustang team that finished 31-8 with a record of 26-2 overall while finishing a perfect 16-0 in the Big West to capture its first conference title since 2007 and fifth in program history.

“Oh, I’m happy,” Vera said. “I was a little bummed at first, but we really want them to win and for the program to continue to have success.”

“It’s so crazy,” Taylor said. “It still hasn’t hit me. When I look back at the indoor videos, I just get chills watching it and just to be a part of such a special group made it that much more special.”

Taylor was recognized for her contributions to the team as she was named Big West Player of the Year. In her senior season, she also helped lead the Cal Poly beach volleyball team to a No. 4 national ranking, the highest rank in program history, with a 27-7 season.

Playing as the No. 3 pair with junior Adlee Van Winden, Taylor also set a record with the most pair wins in program history.

“It’s been an amazing four years. Volleyball has been really great this season and just all the friendships and memories I’ve had the last four years, even not in volleyball, [have] been so great,” Taylor said.

Vera said she is very proud of the accomplishments Taylor has earned during her four years at Cal Poly.

“It has been amazing. The best parts are all the friendships that not only her, but all the parents have and getting to know her teammates as well,” Vera said. “It has been a great four years. A bonus [is] she’s been able to play both indoor and beach. I’m really proud of her and all her teammates and the success in four years because the beginning was pretty rough.”

Darren said he looks up to the success his family has had with Cal Poly athletics, especially Taylor’s success.

“It’s awesome. I used to come down all the time to see her play and watching her do what she did [during her] senior year and to see her dominate the whole league was pretty awesome,” Darren said. 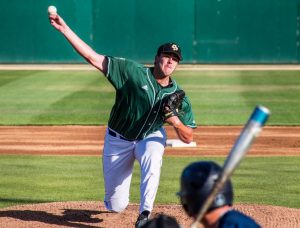 New kid on the mound

Darren is currently enjoying his first season on the Cal Poly baseball team as a starting pitcher and sometimes a designated hitter. He sports a record of 4-4 in 12 games started with a 5.10 ERA and 36 strikeouts. He also has four hits, a double and four RBIs in 17 at-bats.

On the mound, Darren towers over the rest of the team, standing at 6-foot-8-inches and weighing in at 240 pounds.

“At a young age, just being bigger than everyone kinda gave me that confidence up there that I’m bigger and better,” Darren said. “I try not to think about it too much just because I’m a freshman, but I try to do my role everyday and make the team better.”

As a freshman, Darren said the level of talent in college has been a challenging adjustment.

“It’s really just an unbelievable jump that you can’t really prepare for because it’s such a difference from high school,” Darren said.

Because of the family’s history, Darren has a significant amount live up to and he enjoys the inter-family competition.

“It’s definitely high stakes and my sister put it even higher than my mom, which makes it even harder, so I got a lot to look up [to] there, but I’m definitely gonna try for sure,” Darren said.

For the entire Nelson family, their love for all things sports keeps them competing.

Both Darren and Taylor said this passion is what keeps them playing at a high level.

“You see so many people in college get burnt out from their sport. [There is] just so much pressure on them that they don’t like playing anymore,” Taylor said. “Anytime you feel like you’re getting burnt out, just remember why you are playing and for the love of the game and that makes it so much better.”

Darren said he is still adjusting to college life as both a student and an athlete, but his time on the team so far has been a life-changing experience.

“I couldn’t trade this for anything,” Darren said. “The group of guys are definitely lifelong friends, so I’m excited for the future.

For Darren, going to school with Taylor has been a major help. Because she is a senior, Taylor is able to advise him on handling the transition from high school to college both academically and athletically.

“Your freshman year is always pretty tough, but he’s definitely adjusting school-wise and he loves his teammates and coaches, so he’s just getting used to the big jump from high school to college and the difference in [the] level of play,” Taylor said. “He’s adjusting pretty well, but still has a lot of learning to do.”

Darren is thankful for the advice Taylor has given him because, in the beginning, the transition was tough.

“It was a little overwhelming with all school and baseball, but once you adapt to the whole schedule, it’s been awesome and [I] couldn’t trade it for anything,” Darren said. “Having my sister here giving me that advice has helped a lot with that.”

Taylor and Darren’s parents attempted to instill a love for sports in the pair from a young age. Vera had a huge influence on Taylor’s volleyball skills, especially while she was a coach for Sierra College in Rocklin, California.

“She pretty much taught me everything,” Taylor said. “She coached growing up, so I was always at her practices and all her games, so my love for volleyball definitely came from her and she has just been my support system and rock throughout it all.”

“I think both academically and athletically it prepared me because academics are pretty hard there so transitioning here was easier for me than [for] other people,” Taylor said. “With athletics, my team had a pretty good senior year in high school so there was a lot of competition there which was a fun way to end my high school career and get ready for college.”

In high school, Darren played both baseball and basketball before eventually deciding to only play baseball. His mom actually enjoyed watching him play basketball more than baseball.

Even though both Vera and Rich are Cal Poly alumni, they did not force their kids to commit. Darren and Taylor made that decision themselves based on the coaching staffs, academics and the San Luis Obispo area.

“Our parents didn’t really put pressure on us to come here but we came and visited when we were little and both my brother and I just fell in love with this school and everything about Cal Poly and San Luis Obispo,” Taylor said.

Rich was an outfielder for Cal Poly in 1985 but told Darren to visit as many schools as possible.

“[My dad] said, ‘Explore your options and find a place you really want to go,’” Darren said. “This is definitely a great coaching staff and this is where I wanted to be.”

There were a number of factors that helped Taylor make her decision, but as soon as she was able to visit Cal Poly, she knew San Luis Obispo was home.

“I think it was a combination, [of] the legacy­ — that was pretty cool to be able to follow in my parents’ footsteps and then the coaching staff here I loved, they had good academics, a beach program and just San Luis Obispo in general is an amazing city,” Taylor said.

Darren’s father was a major influence on the decision to attend Cal Poly because Rich played for head coach Larry Lee and maintained his relationships with other members of the coaching staff.

“He told me you are going to get a very good knowledge from the game and you’re gonna get a lot better if you go there,” Darren said.

As Taylor prepares to graduate and Darren continues to develop his skills, the Nelson family legacy and names will forever be ingrained within Cal Poly athletics.

“Having those bonds in both indoor and beach and seeing how close our mom and all of her teammates were and that could be us in 10 to 15 years,” Taylor said. “I hope my kids will want to go here.”