The pain, patience and redemption of Khaleel Jenkins 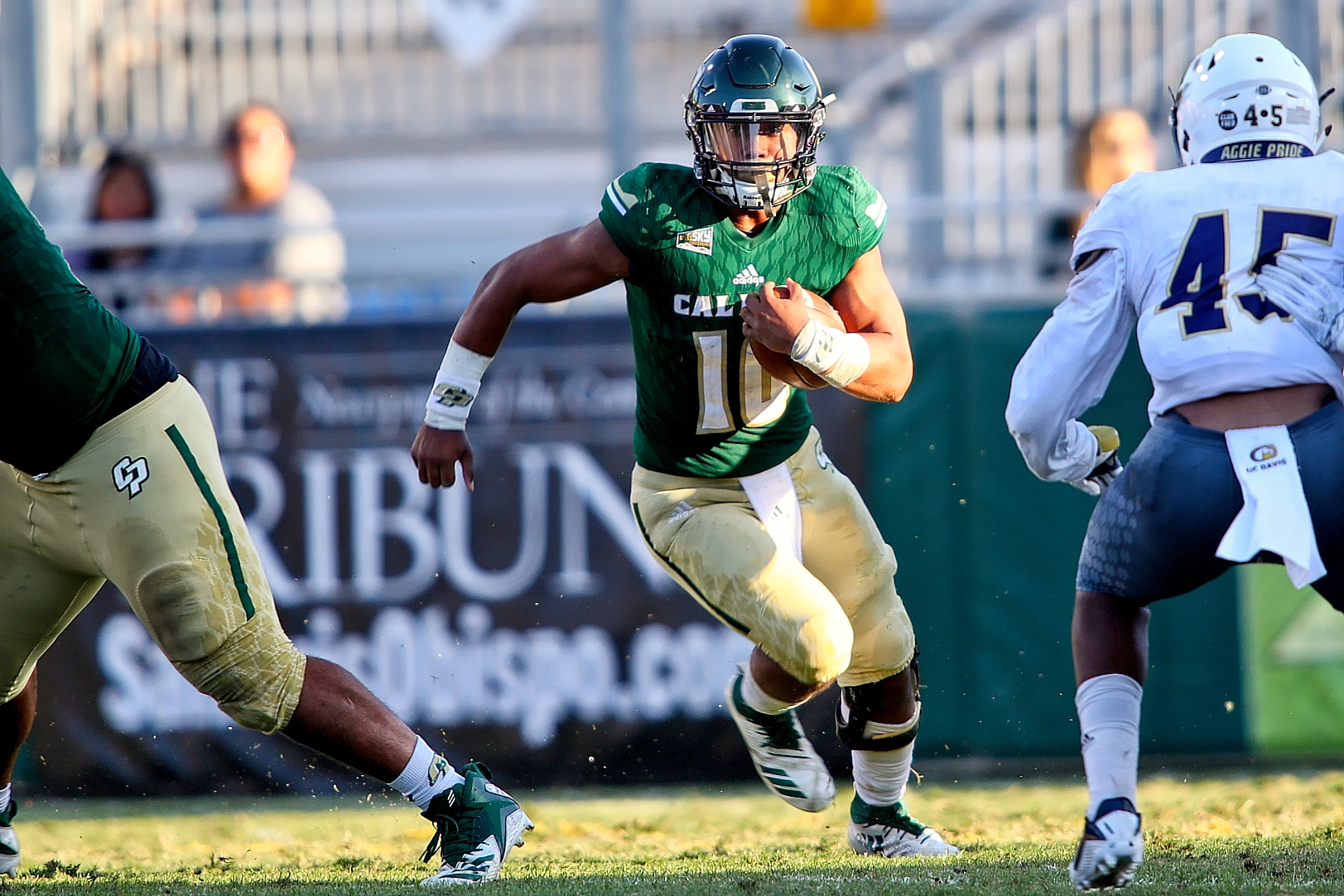 For senior quarterback Khaleel Jenkins, not playing basketball these last four years has been weird. It was always his favorite sport growing up. That was, of course, until Jenkins was approached by Duke, Harvard, Yale, Cornell, Boston College, Nevada and several Big Sky programs to play collegiate football.

Jenkins received his first offer in the summer of 10th grade after he registered 521 yards and four touchdowns as a wide receiver. However, by the time he graduated from Francis Parker School in San Diego, Jenkins had rushed for 2,233 yards and passed for 2,488 yards. Not only was Jenkins directly involved in 57 touchdowns for his team, but he racked up an array of awards and honors, catapulting himself into the Parker Hall of Fame. It was at that time that Jenkins gave up basketball and realized football was his destiny.

In deciding which college he was going to attend, football was just one of many factors for Jenkins. Not only were academics more important, but he wanted to remain close to his family.

“I always told myself, ‘If football ended tomorrow, would I still want to go to that school?’ And Cal Poly checked that box, so I felt it was the right place for me,” Jenkins said.

Dano Graves, Jenkins’ quarterback coach since 2016, remembers picking him up during his official visit after a night spent meeting the other players.

“[Jenkins] was like, ‘I’m going to come here, and after two years I’m going to go to the league,’” Graves said. “He was just full of ambition and full of hope.”

At the time, Jenkins had no idea the amount of pain, patience and redemption he would come to experience as a Mustang.

After redshirting his freshman year and appearing in five games as a sophomore, Jenkins’ time to step into the starting quarterback position finally arrived in 2017. Jenkins was the only junior picked to be a captain that year — a testament to his leadership and tireless work ethic.

During the first five games of the season, Jenkins proved to be a valuable threat on the field. The versatile quarterback threw for 597 yards and eight touchdowns, registered four touchdown passes against Northern Iowa and even came within 24 yards of setting a new program record for rushing by a quarterback in a single game.

“His leadership is incredible, and in that position, that’s extremely important,” Walsh said. “Then you add to it his athletic ability, his ability to throw, his ability to run, his toughness, his mentality. All those things add up to him being a tremendous player.”

It was obvious that Jenkins was just getting started.

Then came Cal Poly’s game against Idaho State on Sept. 30. Jenkins’ impressive performance that night reflected just how dynamic the quarterback can be. Jenkins rushed for 202 yards on 25 carries, ran for two touchdowns and threw for two more. However, somewhere between throwing touchdown passes and scoring them on his own, Jenkins suffered a season-ending injury: a torn ACL.

The Mustangs were only five games into the season and their starting quarterback was bound for the operating room. To make matters worse, Jenkins was just one of three injured captains that were forced to watch from the sidelines as the year progressed.

Shortly after, the team lost their game to Southern Utah, and then faced another loss, and another.

By the time it was over, Cal Poly football secured only one win in the 11-game season — the worst record the team has compiled since 1964. Within weeks, the years of hard work and dedication Jenkins had exhibited on the field were seemingly crushed. Not only did he have to begin the process of rebuilding himself, but as a captain and the quarterback, Jenkins had to begin rebuilding the team as well.

For Jenkins, doing everything he could to recover was never a question.

“My mom is still working nine-to-five and my dad’s still working three jobs, so that’s always going to be the motivation,” Jenkins said. “Until they’re done working, I’m going to keep working.”

And so began the long, painstaking process of rehabilitation. Luckily, Jenkins had one teammate who was going through the same situation — graduating fullback Joe Protheroe.

Protheroe and Jenkins established a tight friendship early on in their football careers.

“Their connection is football, their love of the game and their appreciation and respect for hard work in each other,” Walsh said. “I think that led to a real good bond between the two, where they had complete trust in each other and really developed into great friends.”

When the time came for both captains to fight through the monotonous undertaking of nursing knee injuries, their friendship only became tighter. During their time spent on the sidelines, Jenkins described himself and Protheroe as being in a dark place. Not only were the captains integral parts of the program, but for Protheroe, football was more than just a sport.

The duo’s work ethic in the offseason was unmatched. The two worked out together every day and even went through physical therapy together. As each day came with more progress, both athletes pushed each other towards recovery.

“Having a guy like that to lean on, and him having me to lean on, I think that was probably one of the most valuable things we had,” Jenkins said. “It sucks that we both had the injuries, but there’s not a better guy I could’ve gone through that with.”

As the summer’s end approached, both players had recovered enough to find their way back onto the football field. However, on the first day of practice for the 2018 season, Protheroe was absent.

Protheroe had just welcomed his third child into the world the night before. Jenkins was named the godfather.

“Man, that’s big time,” Jenkins said. “That’s everything. You know the football stuff is great and all that is really cool, but to have that experience, that’s a lifetime bond that we’ll have forever. To be named the godfather, that’s a huge honor for me, and I’m going to make sure I handle that for the rest of my life.”

With Jenkins healthy and ready to play, one final challenge stood between the quarterback and his senior year at Cal Poly — to help lead the Mustangs out of their worst statistical season in more than half a century.

“All it takes is one group of guys to get the thing turned around and instill some belief in a team,” Jenkins said. “Whether that’s the head coach or some assistant or a freshman, it really could be anyone. That’s the beauty of football, you’ve got a fresh start. It starts right after your season though, and it’s going to take a lot of leadership and a lot of sacrifice.”

Going into 2018, that leadership and sacrifice was at the forefront of the minds of every captain on the team. As a result, the leaders aimed high. They wanted to resemble the Cal Poly that they had committed to — the academic school that everyone hates to play in the Big Sky, Jenkins explained.

The players wanted to eliminate all distractions that came with the previous season, on and off the field, to focus solely on football. Their goal was never to win one or two more games than the 2017 season, but to do everything in their power to change the culture and mindset of a struggling program.

Unfortunately, the Mustangs’ strength of schedule in the first half of their 2018 season was one of the most difficult in the entire country. In the first six weeks of the season, Cal Poly was set to play five ranked teams in the top-25 preseason polls — including No. 1-ranked North Dakota State.

As the Mustangs began to fall to their opponents in the first five games of the season, some feared they would repeat as a 1-10 program.

“I think we never lost motivation to still be great,” Jenkins said. “We had things we needed to iron out. We were very inconsistent early on and we were still trying to find our identity.”

Jenkins’ lack of frustration grounded him during this time and became a key characteristic that coaches Walsh and Graves touched on.

“Early on, we could have gotten frustrated again. Guys like him helped all of us stay the course,” Walsh said. “They wanted to see us be more successful and set a path towards future successes. [Jenkins], Harry, Joe and Turner, all those guys did a great job at making sure we got back on track.”

The first sign of that turning point came with Cal Poly’s game against Sacramento State on Oct. 6. Jenkins led the team to a 41-27 victory and finished the night with 73 yards, 19 carries and two touchdowns.

Shortly after, the Mustangs won their game against Northern Arizona, then collected another win and another.

Cal Poly even pulled off an upset victory against No. 24-ranked Idaho State on Nov. 10, effectively ending their opponents’ chance at making playoffs. The months of hard work had finally began to materialize into wins for Cal Poly, leading up to their final game against Southern Utah on Nov. 17.

Emotions ran high as the game happened to be senior night for the Mustangs. Winning the game would not only give Cal Poly a record of .500 for the Big Sky Conference, but it would almost certainly guarantee Protheroe as the number one player for rushing yards in program history — a record that Jenkins, as well as the rest of the team, were hoping to see broken by the end of Protheroe’s career.

When Southern Utah scored twice early in the first quarter, Cal Poly did what they had been doing the entire season — they stayed the course.

Jenkins’ response was not one, not two, not three, but five touchdown passes that propelled the Mustangs to a decisive 38-24 victory. Not only was he just one touchdown shy of a program record, but four out of five of Jenkins’ passes were deeper than 30 yards —  including his 56-yard rocket to wide-receiver J.J. Koski in the second quarter. The touchdowns weren’t just plentiful, they were imposing.

“I think that performance was an exclamation point on what [Jenkins] has done here at Cal Poly,” Graves said. “We truly saw the talent of Khaleel Jenkins that night.”

The Mustangs had won their final game, Jenkins ended his career on a high note and Protheroe secured the record for most rushing yards in program history.

On senior nights, crying is common. However, on this senior night, there was nothing but smiles. The team knew what they had accomplished.

With the last game of his senior year behind him, Jenkins’ future is unclear. His time on the sidelines due to his injuries may grant him a chance at one last year of eligibility at Cal Poly. However, one thing is certain — Jenkins is not done playing football.

“Whether I get next year back or not, I don’t know, that’s out of my hands,” Jenkins said. “But I do know that the four years that I got, I put in a lot. Whatever more I have to give, I hope to give it on Sundays.”