There is New York in everything Donovan Fields does.

For the former Cal Poly point guard, his home is ingrained in him. Fields’ roots, formed through a childhood where toughness was a necessity, are apparent on the court, in his look and his mannerisms.

Fields has made the most of his three years with the Cal Poly Men’s Basketball team. He was an essential player, as both the team captain and starting point guard. However, when the Newburgh, New York native arrived at Cal Poly in 2016, he was surprised by the friendly environment.

“In New York, everybody’s going somewhere,” Fields said. “We don’t really stop to say ‘hi’ or conversate with people all the time.”

“I remember walking through campus and I’d see administrators,” Fields said. “I’d just be like ‘what’s up,’ and I’d keep it moving. And they’d still be conversing with me, and I would be so uncomfortable because I’d have somewhere to be.”

This was one of the many adjustments Fields had to make at the beginning of his record-breaking Cal Poly career. Fields is the only player in program history to score more than 1,000 career points, distribute 300-plus assists and record at least 100 steals. These impressive numbers are emphasized by the fact that Fields did it in just three years.

LEARNING TO BE TOUGH

Fields recalled growing up in Newburgh— a life that was not always easy.

“Living in Newburgh, you just never know what could happen,” Fields said. “Every single day, you never take it for granted.”

Newburgh, a small city about an hour’s drive north of New York City, was called the “Murder Capital of New York” by New York Magazine in 2011 due to its gang violence and high crime rate.

“I had friends that grew up seeing stuff they shouldn’t have been seeing,” Fields said.

Through growing up in a city that was ranked as the ninth most dangerous U.S. city in 2012, Fields learned the importance of being resilient, even when playing basketball.

“If you wasn’t tough, you wasn’t going to play — you’d be kicked off the court,” Fields said. “I was always the smallest guy … so I had to work that much harder to play and to prove that I was able to play.”

Fields began playing basketball at the gym of Saint Mary’s Church. It was a small neighborhood basketball court, barely big enough to fit a team around its edges. But it is where Fields first stepped onto the court, played his first games and made his first 3-pointer.

“I got hit in my face, I got blood everywhere, but I’m not going to back down.” 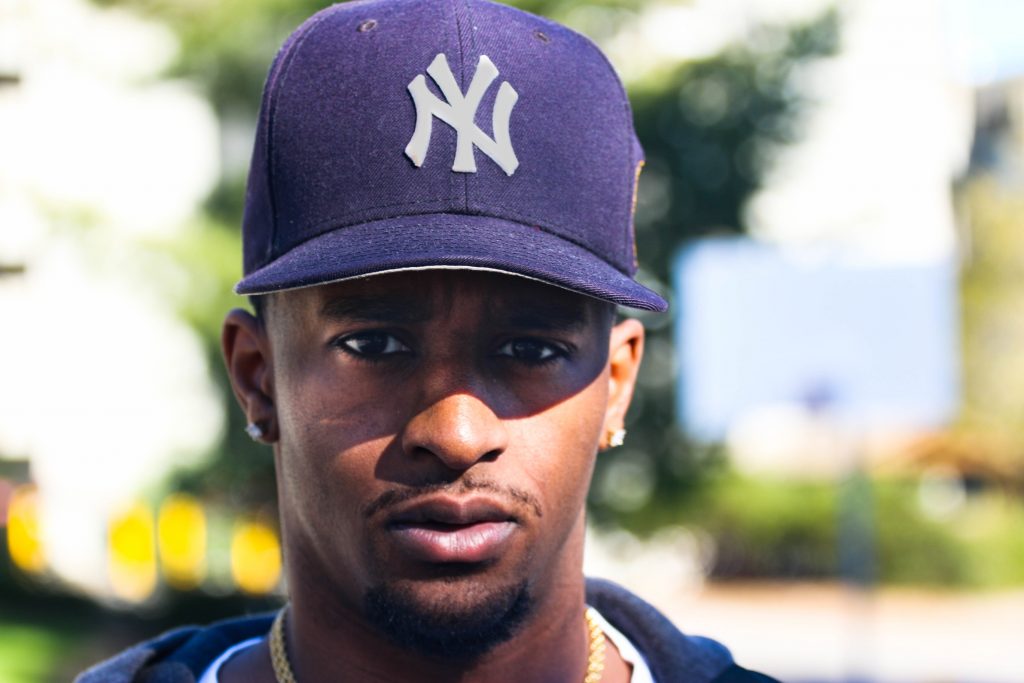 One time, Fields took an elbow to the face during a game. While his nose was bleeding, Fields saw it as an opportunity.

That gym brings many memories to Fields’ mind— the many shots, games and friends made on that basketball court brought Fields to where he stands today.

“I have to go to Mount Saint Mary’s gym when I go back, I have to,” Fields said. “Back home, they always joke with me, saying that I was born in that gym.”

Fields said his father was an important mentor for him, both on and off the court. He has a special appreciation for their relationship, having grown up around others who were not as lucky.

“A lot of kids growing up, they didn’t really have a father figure in their life,” Fields said. “Having my father around, being able to teach me right from wrong, and being able to discipline me, I know that is what helped me make the right decisions in life.”

Fields also looks up to his older brother, who got him into basketball, and his mother — a cancer survivor — whose strength greatly resonates with him.

“That’s my biggest motivation,” Fields said. “I remember seeing her go through the whole process. Her not ever having a doubt in her mind that she wouldn’t beat it …  that made me feel like I’m invincible. I can do anything I put my mind to.”

No matter what Fields had to endure during childhood, he found an escape in basketball.

That love for basketball brought Fields to Cal Poly, after a brief one year stint at Odessa College, a community college in Texas.

When he joined the Mustangs as a sophomore, Fields was not quite ready to become the leader of the team. His quietness on the court caused Fields to receive a quick lecture from head coach Joe Callero for not calling out a play during practice.

“He said ‘open your f-ing mouth. You’ve got to talk. You’re my point guard. You can’t be out here not saying anything.’” Fields said.

It was an important lesson for Fields, who played a full 31 game season to start his Cal Poly career.

“Now, I understand that he was trying to groom me to be a better leader,” Fields said. “They have to follow my lead and not just the coaches lead.”

Fields knew that becoming a team captain required hard work and growth. At Odessa College, he became the leader of the team in just eight months. He achieved the same at Cal Poly, as Callero made him the team captain.

“After my sophomore year …  that’s when he told me he’s going to need me to step up, be more of a leader, be more vocal,” Fields said.

This led to a successful junior year, as Fields started in 30 of the 31 games he played in. He finished third among NCAA Division I players with a 92.6 free throw percentage, which also set Cal Poly’s single season program record.

After a full season as the starting point guard, Fields had the experience and confidence he needed to elevate his game even further.

“His third year, you could tell he was a complete leader on the floor,” former Cal Poly guard Victor Joseph said. “Running the plays, running the show, encouraging his teammates.”

In January, Fields hit the 1,000 career points milestone. He finished out his final season as a Mustang by adding 245 more points, putting him at ninth in program history. However, scoring is not the main job of a point guard. While running the team’s plays, Fields dished out an average of 4.1 assists per game, always looking out for his teammates.

“If you miss a shot, he just comes up to you and says ‘hit the next one’,” Niziol said. “He’s always positive, always trying to encourage the teammates.”

“When you get a genuine captain, who’s really positive and really wants to see people succeed, you kinda attach on to that,” Marcellus Garrick said. “He’s just a stand up guy. Just a good dude off and on the court. You don’t find that in a lot of people.”

Still, Fields tends to be on the quiet side. However, it is also part of his leadership style.

“I’m not the loudest guy,” Fields said. “Everybody knows, if something has to get done, I’m going to show you … rather than being the guy that’s just going to tell you.”

Fields’ usual quiet demeanor contrasts with his style of play. When on the court, the New York influence comes out with a flash.

“He’s fun to watch — a lot of exciting plays, a lot of acrobatic layups,” Joseph said.

Fields makes the most of the little advantages that being an undersized player provides. He uses his quickness to breeze by defenders, either driving to the hoop for a creative layup or arcing a shot over taller opponents. Fields calls this New York style basketball.

“It’s real flashy, real fast-paced.” Fields said. “It’s the way I like to play. Being flashy with ball-handling, using different dribble moves to throw your defender off.”

Making highlight reel moves, while also running the team’s plays, helped Fields earn the 2019 Big West Hustle Player of the Year award. He is the first Mustang to receive the honor.

“He’s got the handle and everything, a little shimmey too,” Garrick said. “I think all of that originates from the East Coast, especially New York.”

Fields fashion style is also a reflection of his Newburgh roots. It is easy to spot, wearing a pair Timberlands or Jordans almost every day of the week.

“He’s always wearing Timbs,” Garrick said. “He’ll even wear Timbs in the summer. Who does that?”

According to Fields, Timberland boots, a staple item in his closet, can also be found in most New Yorker’s wardrobes as well.

“If I see someone with Timbs on, there’s probably a good chance they’re from New York,” Fields said. “Every time I pull them out, everyone goes ‘oh, Don has his Timbs on’ and everyone’s talking crap or whatever. But that’s definitely the most New York thing about my style.”

Other items that complete Fields’ Newburgh look include a white t-shirt, chains and, most importantly, a grey-brimmed New York Yankees hat.

“I kind of try to stick to my own New York style,” Fields said. “Especially, when I’m out here, because I like to show it off.”

“Breaking the cycle, that’s what it’s all about.”

Although Fields’ has maintained his New York origins through his clothing, some of his mannerisms have changed over time.

“I don’t know if this is a west coast thing or a SLO thing,” Fields said. “When you see people, they actually stop to say hi to you, and I kind of grew to like it too.”

When Fields first arrived at Cal Poly, these interactions had made him uncomfortable. Now, he has embraced the habit.

“I try to actually say, ‘what’s up’ and conversate,” Fields said. “Like, ‘how you doing, how’s your day going?’ Simple things, it doesn’t have to be too long.”

In just three years, Fields has left his mark on San Luis Obispo, which he calls his second home. But nothing will ever replace Newburgh. Wherever Fields goes, whether he is gracing a basketball court with his quick moves or simply walking around in his Timberlands, the influence of growing up in New York will be with him.

“For me to get the opportunity to make it out, and for everybody from Newburgh to be able to see me … I have to take pride in that.” Fields said. “Breaking the cycle, that’s what it’s all about.”