Face-off over budget may leave Cal Poly with limited funds

Cal Poly faces a budget crisis. Inflation is rising, and the entire California State University System needs more money to combat it. It may not be coming, and the campus may have to cut costs, either in the number of classes offered or in services and grants administration provides.

May 11, Governor Brown unveiled his new budget. He proposed a paltry $5 more to the CSU system, with an additional $100 million in one-time funding for maintenance projects. He continued to encourage less spending, and more saving.

“We’re nearing the longest economic recovery in modern history, and as Isaac Newton once observed, ‘What goes up, must come down,’” Brown said at the press conference. The United States is reaching its longest point of recovery soon, Brown said, meaning an economic downturn is imminent.

According to an emailed statement from White, the revised budget leaves the CSU system $171 million below its current operations. 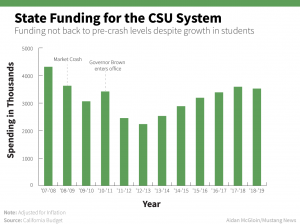 March 20, Chancellor White announced the CSU system will not raise tuition, in order to put pressure on the state budget to provide for students. In line with the April protests, he said the burden is on the state to fund public university.

“There will be serious adverse consequences if state funding falls short of meeting our university needs,” White warned in his emailed statement.

January 10, Governor Jerry Brown unveiled his proposed budget with an additional $92 million given toward the CSU system. Outpaced by raising inflation, it results in a $67 million decrease for operations. With a $9 billion state surplus, he is placing $5 billion into a rainy day fund in anticipation of the state’s economy faltering. 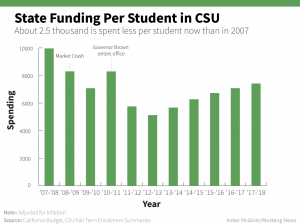 April 4, approximately 1,000 students and faculty from across the CSU system traveled to Sacramento to demand more money from the state budget.

The students and faculty, members of Students for Quality Education, said increasing public university costs are disenfranchising low-income students, and the amount of state funding provided is not enough for public universities to function.

“This generation of students are paying more and facing more barriers to higher education than every before them,” Cal Poly’s SQE leader and political science senior Mick Bruckner said, comparing the time to work away a college degree in the 70s to current day.

They were joined by the Senate President Pro Tempore Toni Atkins, Speaker of the House Anthony Rendon, and CSU Chancellor Timothy White, who administrates all 23 CSU campuses with direction from the Board of Trustees.

The two houses of the state legislature will debate the budget now, with the leaders of both houses declaring they stand with increasing the California State University budget. Their actions will determine Cal Poly’s ability to provide classes and guidance to students.

After both houses confirm their versions of the budget, a joint committee will work out the differences and send the legislature’s budget to Brown, who has the power to reduce or eliminate any item on the budget, by April 1.