Here are the political issues students care about

It’s not quite election season, yet the ongoing political debates and coverage have filled the air with political fervor. Cal Poly students are feeling it just like everyone else.

Last month, Mustang News conducted a survey of 335 Cal Poly students — freshmen, sophomores, juniors and seniors from across the academic colleges — where they were asked what political issues were most important to them this political season.

Here’s what they said:

According to the survey, Cal Poly students believed that education ranks high in importance overall.

Political science associate adviser Michael Latner got his PhD in political science at UC Irvine in 2008. Latner discussed his views on the education conversation in politics and how students are realizing its importance in their lives.

“There’s a national conversation that’s taking place that students are engaged in, about what we need as far as higher education in the 21st century,” Latner said. “That’s primarily an economic argument.”

Latner was not surprised that students are more interested in education than other political issues.

“I think that education should be a primary concern,” he said. “I’d like to see it play a larger role in presidential campaigns.”

“It’s not just about having education, it’s about the right education,” Truong said.

However, Truong knows the right education comes with a cost and is concerned about the high amounts of money students must pay in order to earn their degree.

“As a college student, we’re raking in thousands and thousands of dollars of loans,” Truong said. “I’m not even 25 and I already owe a ridiculous amount of money.”

Troung believes that lowering the cost of higher education would not only be easier on students, but it would also be beneficial to the nation as a whole.

“You look at other countries and they have free education, and they seem to be doing pretty fine,” Truong said. “Our education doesn’t even rank that high compared to other countries, so in the grand scheme of things, is all of this debt really necessary?”

The economy was rated the second most important political issue by Cal Poly students.

“What happens with the money is really important for this nation right now,” Truong said.

“Our nation has a huge pile of debt and it’s not getting any better,” Sullivan said. “It’s one of those problems that we see coming from a mile away, and if we don’t fix it, we’re going to have [even more] problems.”

After the Columbine massacre in 1999 and more recent mass shootings, such as the San Bernardino massacre that killed 14 in December, gun possession has become a recurring controversy in the U.S.

The issue hasn’t died down at Cal Poly either. In fact, according to its number three spot in the most important issues to Cal Poly students in the Mustang News survey, it’s still a hot-button issue.

While many groups believe that automatic weapons should not only be harder to obtain but should be banned altogether, others observe the right to possess such weapons under the Second Amendment of the U.S. Constitution.

Business administration seniors Jeff Moulyn and Ryan Kilgore shared their own views on the ongoing issue.

Kilgore believes there should be a middle ground with gun control, creating safety while still letting people possess and carry arms.

“Should there be means of ensuring public safety in a society that grants us all the right to bear arms? Yes,” Kilgore said. “Should interest groups and politicians be allowed to infringe on my second amendment right? Of course not.”

Moulyn also believes that some measures, such as extended background checks, may help with the issue, but anything further would be unnecessary. “From my experience I have seen legislation that affects lawful owners far more than criminals, not vice versa,” Moulyn said in an email.

“A person with malicious and evil intentions can easily bypass any device such as a CA required bullet button, or acquire a standard capacity magazine that exceeds 10 rounds,” Moulyn said. “These rules are incredibly easy to get around, and a person who wants to use guns to hurt others is not going to be hindered by them.”

Though the survey indicated education, economy and gun control were most important to students, some students still had something to say on other areas such as immigration rights, environmental issues and foreign policy. 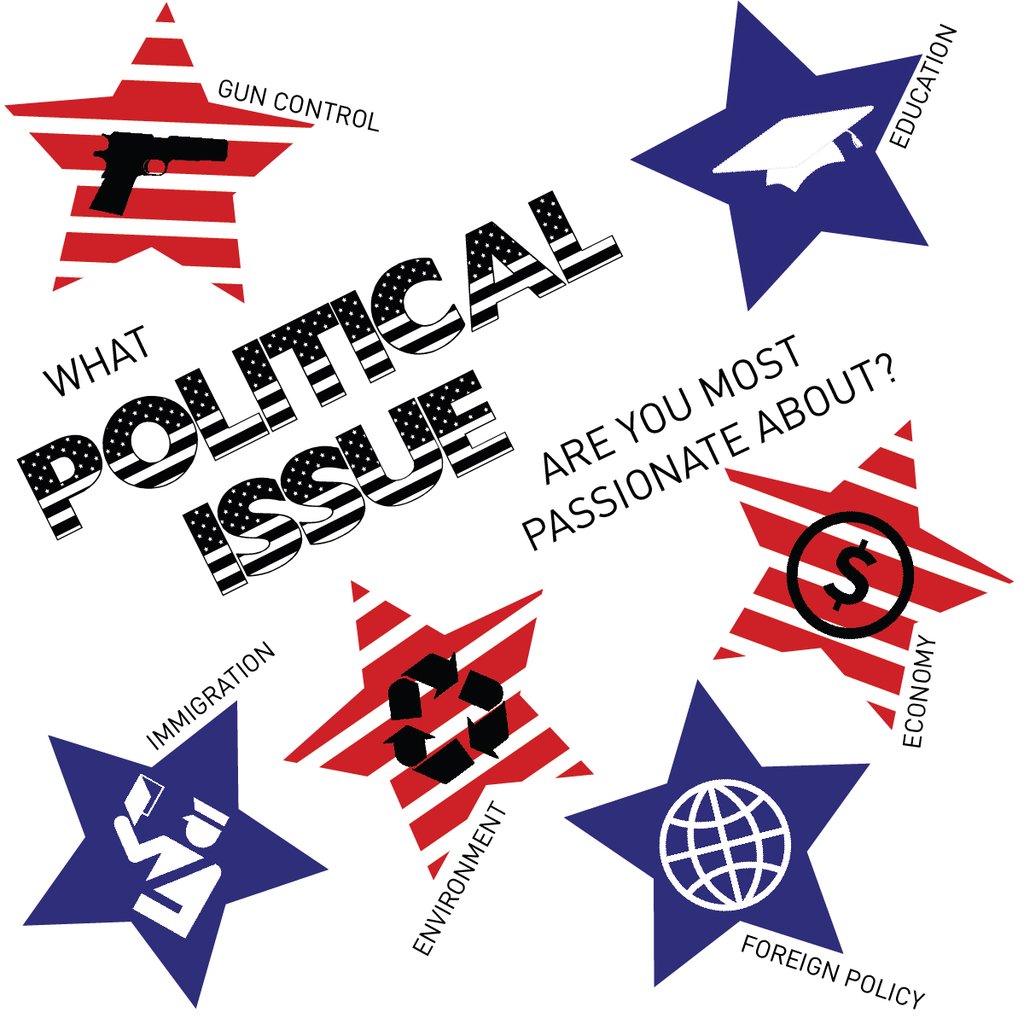