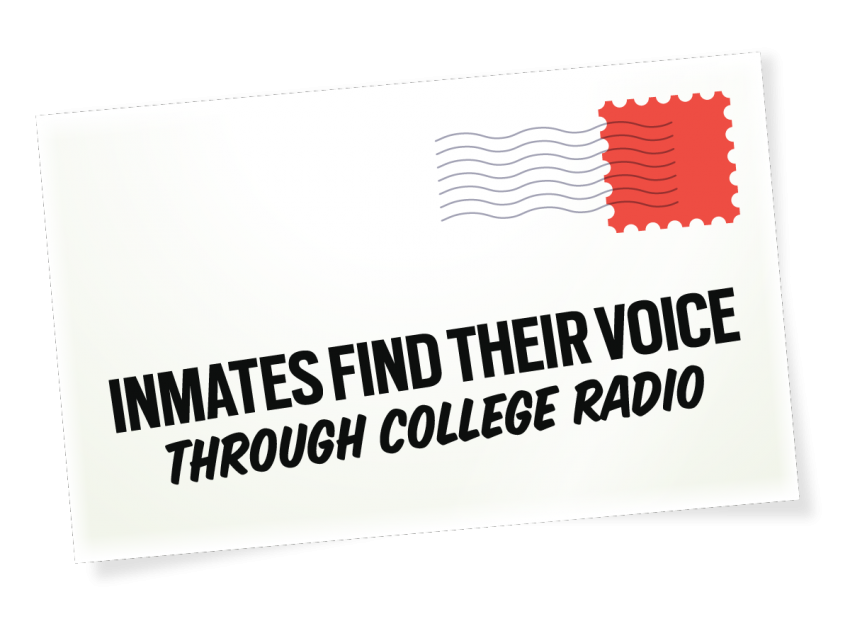 A metal detector, two I.D. checks and five locked gates separate the public from the inmates at the California Men’s Colony (CMC).

A cement walkway leads from the last gate to the yard in the East Wing, where around a dozen inmates stand inside.

One of the inmates is Kenny Kovzelove, a convicted felon serving a life sentence for two counts of first degree murder. He has been incarcerated for nearly 30 years.

Kovzelove is one of many CMC inmates who listen to Cal Poly’s student-run radio station, KCPR.

“Music can kind of save you when you let it, when you run back to it,” Kovzelove said. “And at least in my experience, it’s a shared experience with other people and can unite people from different ages or different backgrounds.”

“Music can kind of save you when you let it”

After he was incarcerated in the mid-1990s, Kovzelove started listening to a punk show on KCPR. He liked the music and the relatability of the DJs. He said one night he heard a DJ talk about the negative mail they were receiving about the content on their show. So, Kovzelove said, he wrote his first letter to KCPR to express his gratitude for the punk show.

“Sometimes I can hear the DJs having a bad day and I write and I’m like, ‘Hey man, you’ll be alright, you know? Everything’s gonna be cool, you know? It’s not that bad. Look up. Look on the bright side,’” Kozelove said.

Kovzelove said punk music is his niche and that he finds happiness listening to DJs curate the exact music he grew up listening to. He said the DJs have even inspired him to play his guitar again.

“There were nights when I was alone in a cell and [there was] a late night show that was really cool and unique,” Kovzelove said. “I would be able to tune in when I had nobody and was just in this little box with some really nasty, dark, despondent thoughts. And [the DJ] was the most optimistic, cool person. And the thoughts would take me away from this little hell and I’d get, for maybe an hour or two at a time, an alternative. I’m never ever going to forget that, obviously.”

He said he wanted to give back the same positivity DJs had shared with him, so he began frequently writing letters to his favorite DJs.

“If it helps, if people like to get a letter saying, ‘Hey you’re valuable. I like listening to you,’ of course you’re gonna get a letter,” Kovzelove said.

Camilla Corcuera (DJ Cry Baby), a journalism senior and KCPR DJ, hosted a punk rock show for the past year and a half and received more than 20 letters from CMC inmates. She said she initially found it strange that inmates wanted to write her, but quickly found value in the communication.

“The people who write me are older and they were part of the punk gen. and rock gen. and grew up listening to that music,” Corcuera said. “I think when they hear it on a college radio they think ‘Cool, these college kids are still listening to the music that I used to listen to.'”

“When they hear it on a college radio they think ‘Cool, these college kids are still listening to the music that I used to listen to'”

Corcuera said Kovzelove has been her most consistent supporter from the CMC, sending her a letter almost every week since she started on-air.

“I kinda get it,” Corcuera said. “Music lets you change your mindset, be in a different element, maybe nostalgia. I can help these people or be like a friend to them even though we don’t know each other.”

Corcuera said getting the letters made her feel proud to be on-air because strangers cared about her music. She has never responded to Kovzelove, but said her experience was made unique knowing her show had such a heavy impact.

Construction management senior and former KCPR DJ Connor Sullivan (DJ Wet Leather) also received letters from an inmate at the CMC for several quarters. Leonel Moncada is serving a life sentence for one count of first degree murder and one count of battery with serious injury. He enjoys writing to Sullivan about anything that is on his mind.

Like Corcuera, Sullivan played punk music during his show and said he thinks it is the reason inmates wrote to him. Sullivan began responding to letters in Fall 2018 and has even spoken to Moncada on the phone. He said he has never been unsettled by the correspondence and has no reason to be.

“Dude, I’m stoked every time I get [a letter],” Sullivan said. “I keep all of them, obviously … and it’s just nice to talk to somebody who has a completely different worldview than me, which I think is exceedingly rare.”

“Dude, I’m stoked every time I get [a letter]. I keep all of them, obviously.”

Moncada has listened to KCPR for almost a decade and began writing to different DJs about eight years ago. He said he first sent letters to make requests for music, but the writing quickly became more meaningful.

Inmates at the CMC have the opportunity to take college-level classes and earn degrees. Moncada is a student himself and likes to listen to KCPR DJs while he studies. He said it keeps him motivated to learn because he is able to connect to a college community.

“I am obviously where I’m at,” Moncada said.

“So I’m trying to create an atmosphere. I can do college work, be in college mode, listen to college music and that helps. Being able to elaborately rehearse the material that I’ve learned in school in my letters, or sometimes maybe correspond with somebody who might be taking the same classes helps me consolidate it to memory as well.”

Moncada said he likes the various personalities that come through on-air. The talk shows, he said, are relatable and help break the monotony of prison life.

Kovzelove and Moncada are not the only inmates who write to KCPR DJs. KCPR Adviser Patti Piburn said jail mail has been a part of the station’s history since its inception.

“It’s more normal than you think in broadcast in general,” Piburn said. “This is not an anomaly. It’s actually really common if you work at a TV station or radio station.”

Piburn said she thinks radio can feel very intimate and allows listeners to develop a connection to on-air personalities. Piburn worked in television broadcast for about 20 years and said mail from viewers is almost expected.

Mustang News reached out to KCPR alumni on their private Facebook group to learn more about the history of the correspondence. We received more than 50 comments from former DJs claiming to have received mail from the CMC. Some letters date as far back as the 1980s.

Many alumni claim they still have stacks of letters and artwork from inmates. Some felt uncomfortable with the attention and called the communication “creepy.” Others said they developed relationships with inmates, who they are still in correspondence with today.

At least eight former DJs said they received mail from Brian Simpson, another CMC inmate. Simpson has since been moved to another prison but, according to KCPR alumni, he was a dedicated listener of the station and a great writer.

Another former DJ, who goes by Pickles, began receiving mail from CMC inmates in 2011. She has saved more than 80 letters from inmates, a majority of them coming from Simpson.

“Dude, Brian was so cool,” Pickles said. “He sent me letters all the time. It was really valuable, my relationship with all of them. But Brian I just talked to the most. We gave each other strength. He would always tell me I’m doing a good job.”

“He sent me letters all the time. It was really valuable, my relationship with all of them.”

Mustang News was unable to contact Simpson, but one alumnus of the station, Brian Powell (DJ Briceratops), said he has been in contact with Simpson nearly every month since he left KCPR in 2012. Simpson even sent him a handmade birthday card.

“Brian had a huge part in my time as a DJ at Cal Poly,” Powell wrote in an email to Mustang News. “His letters proved our work and dedication made a difference to someone. His letters were always extremely positive, uplifting, kind, and thoughtful. It was clear that KCPR held a special place in his heart.”

Kovzelove said he is deeply grateful for the human connection through KCPR and will never stop listening to the station.

“There is no other station for me. I am going to be tuned into KCPR until I drop,” Kovzelove said. “These DJs gave me this positive energy during the most difficult periods of my life. I’m never ever gonna forget that.”

Kovzelove will be eligible for parole in about 20 years. For now, he wants to give everything he has to KCPR.

“I’m not in a high tax bracket right now on prison wages,” Kovzelove said. “But I’ll put it to you this way — you can have it all. I’d pledge it all, every penny.”

Claire Blachowski and Sophia O’Keefe contributed to this story.