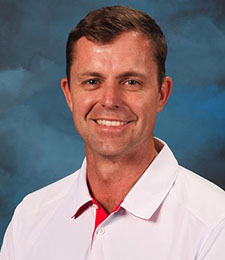 “I’m looking forward to taking everything that I’ve learned over ten years of coaching and bring it here to Cal Poly,” Rowe said.

Cartwright announced his retirement in December 2019 and coached both the men’s and women’s golf programs for 12 seasons from 2003-2015.

Prior to his 10 years of coaching, Rowe had a seven-year career in professional golfing where he competed in various tournaments across the world. He won four international tournaments, including two wins at the Open de la Rèunion and was ranked ninth by the Allianz Golf Tour in 2009.

Rowe recently regained amateur status in 2016 and has since been active on the course.

Before arriving at Cal Poly, Rowe was the assistant coach and later the associate head coach for the University of Las Vegas over the past six seasons. At UNLV, he helped the program win its first Mountain West Conference championship in 14 years in 2016, and followed that up with two more conference titles in 2017 and 2018.

Before UNLV, Rowe was the assistant coach for four years at his alma mater, Stanford University. With The Cardinal, Rowe helped boost the team to a NCAA Final Four finish in 2014 and assisted in leading eight student athletes to All-American honors.

“One thing I’d like to get more are the All-American scholar awards, I think that is something that all of our players can achieve,” Rowe said.

Rowe also looks forward to bringing his experience as a professional and a coach to boost the program at Cal Poly.

“I will be using a lot of what I’ve learned from great mentors but also implementing some ideas of my own, just the way that practice is structured, how qualifying operates, and I want to bring in high and low accountability to the team in terms of every shot counting,” Rowe said.

Rowe said he plans on having a stronger schedule against high-level teams, which he already has planned for next year, competing in the strongest tournament possible. He also hopes to involve mentorship with the program and have “fun” trips with the team while playing on the best courses. Most importantly, Rowe said he wants the players to develop a strong passion for the sport.

Rowe said he is keeping strong sights on recruitment plans for the 2021-2022 season. His plans include bringing in aspiring athletes that aren’t always recruited to high-profile programs.

“I would really like to position [Cal Poly] as a really viable alternative to the [college] that everyone seems to want to go to,” Rowe said.

Aside from the new recruits that Rowe plans to bring in the future, his current players are excited to see what he can bring to the program.

Junior men’s golfer Tanner Podres has been meeting with Rowe and the rest of the team over Zoom and speaks highly about how his personality will influence the team.

“He’s very energetic and enthusiastic for sure, definitely someone that wants to win and wants the best for Cal Poly and all programs, but especially golf,” Podres said. ”I think he’s for sure the man that’s going to be able to do that for us, which is super exciting.”

Sophomore men’s golfer Will Draper has also been meeting with Rowe over Zoom and has high expectations of learning new skills from his new coach.

“[Coach Rowe] is going to take the steps to implement what he’s learned from top college golf programs and apply that to us and then hopefully we’ll flourish and just grow until becoming one of the top college programs in the nation,” Draper said.

Draper has also noticed Rowe’s early commitment to the program.

“His leadership and communication and dedication towards the players [is something] I can already see, I really love that aspect about him and he’s all about trying to help you and trying to improve” Draper said. “I feel like the sky is the limit for us. We have so much potential.”

Along with the excitement and expectations that the players have about Rowe taking charge, they are looking forward to the “refreshing feeling” of being able to easily connect with Rowe because of the relatively small age gap between him and the players.

“We get along pretty well so far, he’s pretty young, his early forties, so it’s not super hard to connect with him versus some teams that have older coaches,” Podres said. “It’s a little difficult if there’s a large age gap to really connect with your coach, so I don’t think that’ll be a problem at all for our team.”

Rowe said he has some achievements he wants to accomplish early on as head coach, such as gaining the team’s trust and earning their confidence as well as involving himself and the team in the community as much as possible.

Competitively, Rowe said he hopes to win the Big West Conference as soon as possible. Within three years, Rowe wants to see Cal Poly be the favorites to win the tournament every year.

Rowe said he is looking forward to competing in September and bringing the best of his abilities and experiences to Cal Poly.

“I think our goals need to be, firmly, to be the dominant team in our conference, and that’s possible,” Rowe said.