Salat at Cal Poly: Finding space for prayer with only one prayer room 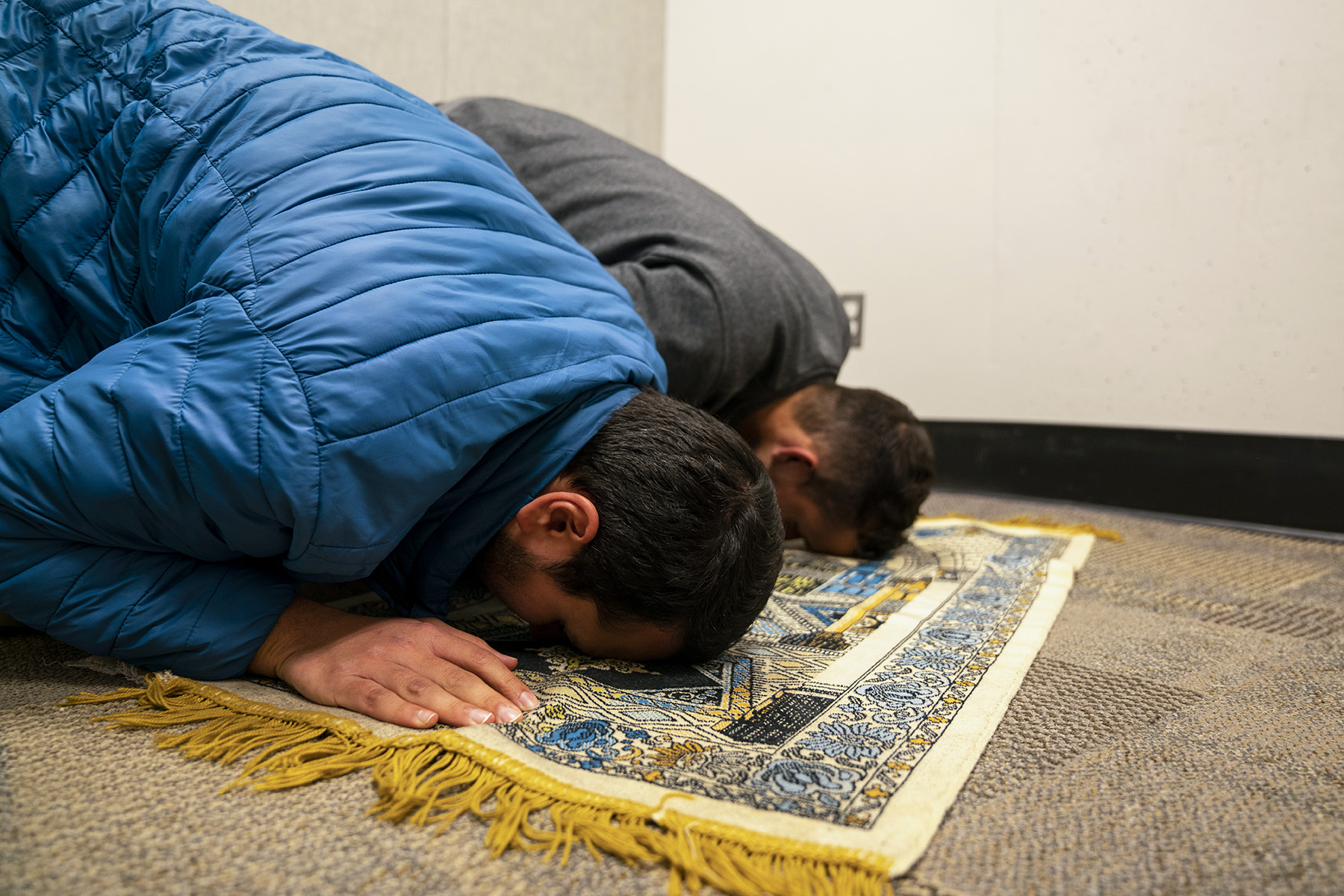 There is only one designated area for prayer on campus. The Inclusive Prayer/Meditation/Sensory Room: a small, approximately 8’x11’ room on the fourth floor of the Robert E. Kennedy Library. Sulaiman said he spends most of his time on campus away from the library, leading him to use impromptu spaces for prayer — building corners, quiet walkways and empty classrooms.

As a practicing Muslim and president of Cal Poly’s Muslim Student Association, Sulaiman, a general engineering senior and Mustang News opinion columnist, participates in salat (also spelled salah). Salat is one of the Five Pillars of Islam and instructs Muslims to complete a ritualistic prayer five times a day during certain timeframes.

Time windows for prayer are based on the position of the sun. There are dawn, midday, late afternoon, sunset and evening prayers. Some Muslim students use the app Muslim Pro, which sends out phone notifications during prayer windows each day.

The prayers involve a series of movements, including bowing and kneeling with forehead and palms touching the floor. Each prayer position has a corresponding recitation of a chapter or portion of the Quran. The prayers are done facing qiblah, which is the direction of the sacred building at Mecca, Kaaba.

Religious studies professor and Muslim Student Association advisor Stephen Lloyd-Moffett said the Five Pillars of Islam can be seen as tools to help Muslims stay on the best spiritual path.

“In Islam, salat is a daily discipline to keep you remembering God,” Lloyd-Moffett said. “The idea is about every three to four hours, you need a gentle five-minute reminder of who God is.”

Sulaiman said he usually has one of two experiences while completing salat.

“I think a generic response is satisfaction that I completed an obligation,” Sulaiman said. “At the very least, it is me showing gratitude five times a day. The sometimes response, not rare but not often, is peace, tranquility, humbleness.”

Sulaiman also said where he prays can affect his experience. He is usually not close enough to the library to use the prayer room, so he prays near his classrooms and favorite study spots. In public, he often rushes through prayers.

“I feel weirded out because people feel weirded out,” Sulaiman said. “There’s a sense of ‘Ah, shoot, what are they going to think?’ Sometimes I just don’t care and I’m like, ‘Yeah, I’m doing what I got to do.’ I’m more proud of it. But other times, I feel a little bit more on edge.”

In a small walkway he prays in at night, women often pass by, and he said he worries they might be suspicious of his presence. Once, when praying near the Health Center with his head bowed to the floor, a nurse came out to ask if he was okay. Unable to stop the prayer to speak, he gave her a thumbs up to communicate he was fine.

Even though Sulaiman said he enjoys praying outside in nature, he said he would use the prayer room more often if he could easily reach it between classes.

“It’s nice to go pray in there because, for one, there’s a sign so people know what you’re doing, and you have a space no one is passing through,” Sulaiman said.

The Inclusive Prayer/Meditation/Sensory Room opened in May 2017. Rubia Siddiqi, an environmental engineering alumna, was president of the Muslim Student Association (MSA) at the time.

That year, a library staff member told a student in MSA there was a room in the library which was not being used for anything. Siddiqi worked closely with the library and university to open up the room for prayer. The room is inclusive and multi-purpose, not just reserved for Muslim students.

“For years, MSA has tried to get a prayer space,” Siddiqi said. “Before, we used to pray on the library’s second floor, kinda in an open area by the emergency exit sign. Even though it’s not a huge room, I’m so grateful we have [the prayer room] as a resource on campus.”

Praying with the hijab

Siddiqi’s sister, Bismah Siddiqi, is currently an anthropology and geography senior at Cal Poly. Unlike Sulaiman, she does not feel comfortable praying outside on campus and only uses the prayer room.

Siddiqi said she is unable to concentrate on her prayer when people are looking at her. She also said she worries about the safety of praying in public.

“Being visibly Muslim is different,” Siddiqi said. “A lot of the guys can kind of blend in when they pray — people don’t usually understand what they’re doing. But when I’m praying, it’s obvious because of my hijab. Rationally, I don’t think I’m in danger at all here, but in the back of my head I’m like, ‘It’s possible.’ So I would rather not. ”

Siddiqi’s concern partially stems from experiences on campus. When Milo Yiannopoulos came to Cal Poly to speak, she said a group of men stopped walking to bark at her. In one of her classes, she said a student raised her hand and said it was un-American to wear a headscarf and stay with an abusive husband — linking the two ideas together.

Siddiqi said she likes the location of the prayer room because she spends much of her time studying at the library. However, she occasionally misses prayers throughout the day when she cannot get to the library in time between classes.

Like Sulaiman, Siddiqi said having another designated space for prayer more centrally located on campus would be helpful.

“I had a schedule one time when I was literally missing so many prayers because I had classes back to back,” Siddiqi said. “I felt weird telling my professor, but if there was just somewhere I could go really quickly, that would be nicer than nothing.”

Siddiqi said she does not think any of her professors would have an issue with her leaving class to pray, but that she feels uncomfortable bringing up the topic. She said it would be nice if the university let professors know that students participate in salat, particularly during Islamic holidays when prayer is especially important.

Praying during Ramadan, May 5-June 4

MSA advisor Lloyd-Moffett worked with the university to secure two additional prayer spaces, one in the University Union (UU) and one in the Recreation Center, for Muslim students during Ramadan, which is May 5 through June 4 this year. This is the first year extra prayer space has been available for the holiday.

The observance of Ramadan is one of the Five Pillars of Islam. During the month-long holiday, Muslims fast from dawn to dusk. Lloyd-Moffett said Muslim students who are not always able to participate in salat usually rededicate themselves to prayer during Ramadan.

While this additional prayer space on campus is temporary, there is potential for more permanent prayer spaces to be established.

In an email to Mustang News, Vice President of Student Affairs Keith Humphrey said a second prayer room is not out of consideration. The difficulty would be in identifying space for it.

Humphrey also wrote about the potential for an Interfaith Center on campus. Student Affairs is currently working on securing private support for the potential facility. All funding would need to come completely from donors.

“This facility would provide space for individual and group prayer, spirituality activities and personal meaning making,” Humphrey wrote. “It would also promote intentional collaboration, exploration and understanding across the different faith identities our students hold.”

Sulaiman said he would appreciate more designated space to pray, but he would also feel more comfortable praying anywhere on campus if there was greater understanding of Islam at Cal Poly.

“If people knew what Muslims do in so far as prayer, that would make me feel less awkward,” Sulaiman said. “Then people would just pass by and be like, ‘Okay, that guy is just praying.'”