Cal Poly Beach Volleyball’s historic season came to an end on May 8 after losses to #2 USC and #1 UCLA eliminated the Mustangs from the NCAA Tournament in Gulf Shores, Alabama. The losses came as an unfortunate end to an otherwise thrilling season.

The Mustangs finished the season with an overall record of 24-11, marking the third time in the program’s seven-year history that the team has finished with 20+ wins. All eleven losses came from nationally ranked programs, and eight of the eleven were served from top-5 ranked teams. Regardless, Cal Poly’s season was enough to win the Big West Title and earn the ladies a berth in the program’s second ever NCAA Tournament.

Cal Poly started the season on the road with three wins and three losses after visits to Tallahassee and Los Angeles, but then surged ahead on a ten-game win streak. The latter half of the wins came during an all-Big West weekend at Swanson Beach Volleyball Complex in San Luis Obispo. 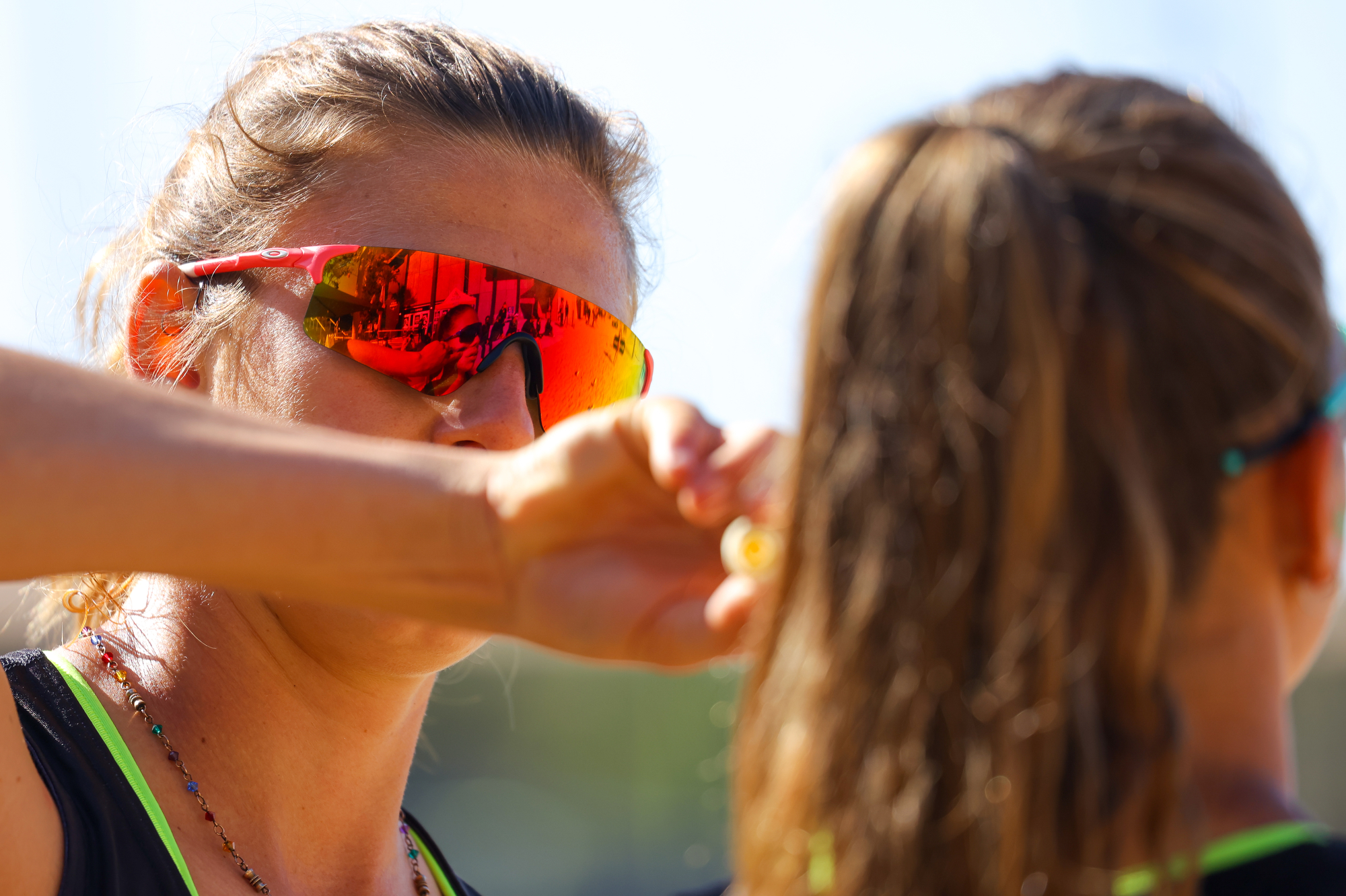 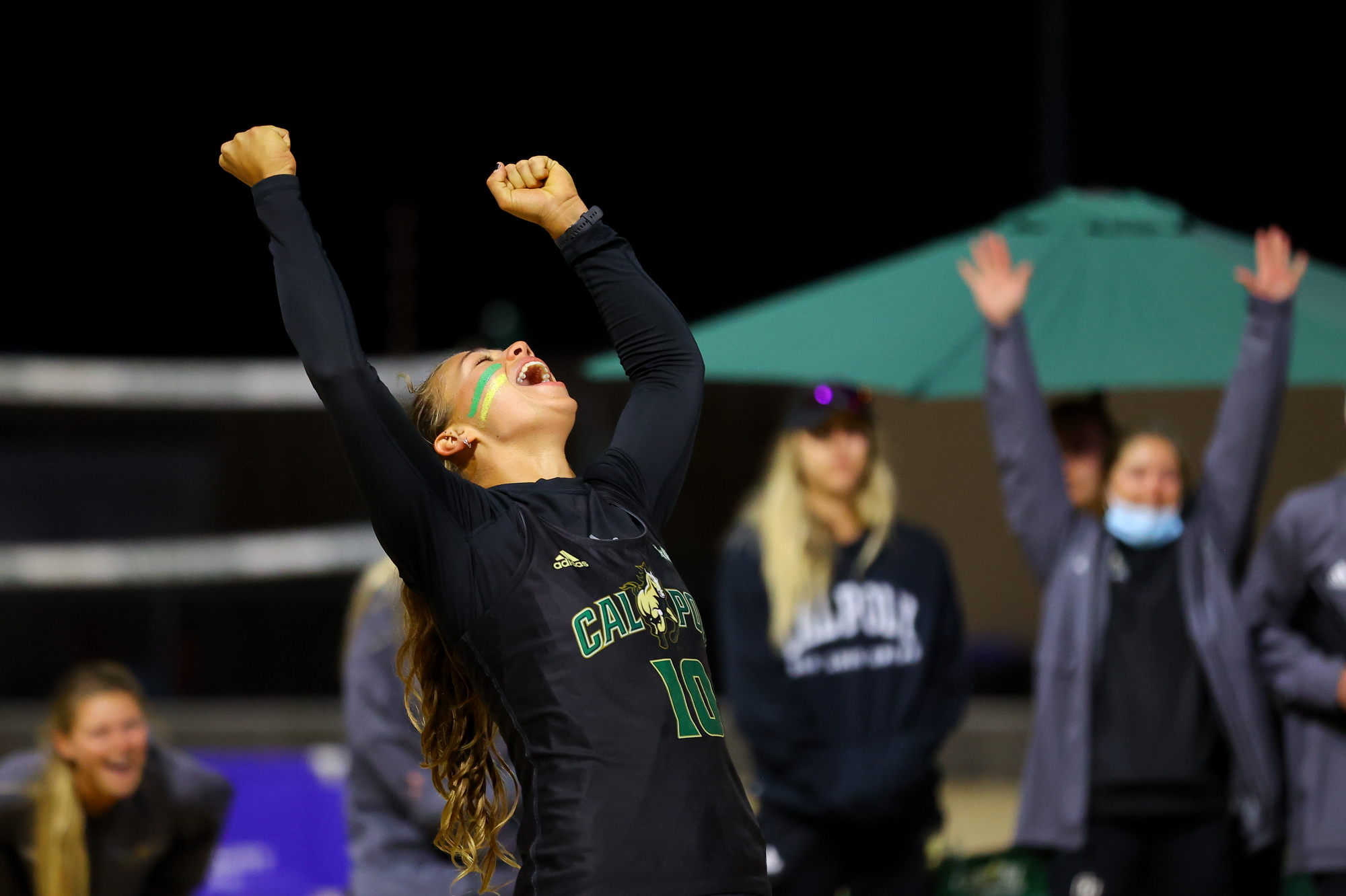 Cal Poly’s number one pair of redshirt senior Emily Sonny and redshirt junior Macy Gordon put on a masterclass during the conference matchups, finishing the weekend 5-0, and the strong showing earned the duo their third Big West Pair of the Week in three weeks. As if that wasn’t enough, the two went on to win a fourth Big West Pair of the Week in late April. The fourth time marked the most a pair has won the honor in a single season. 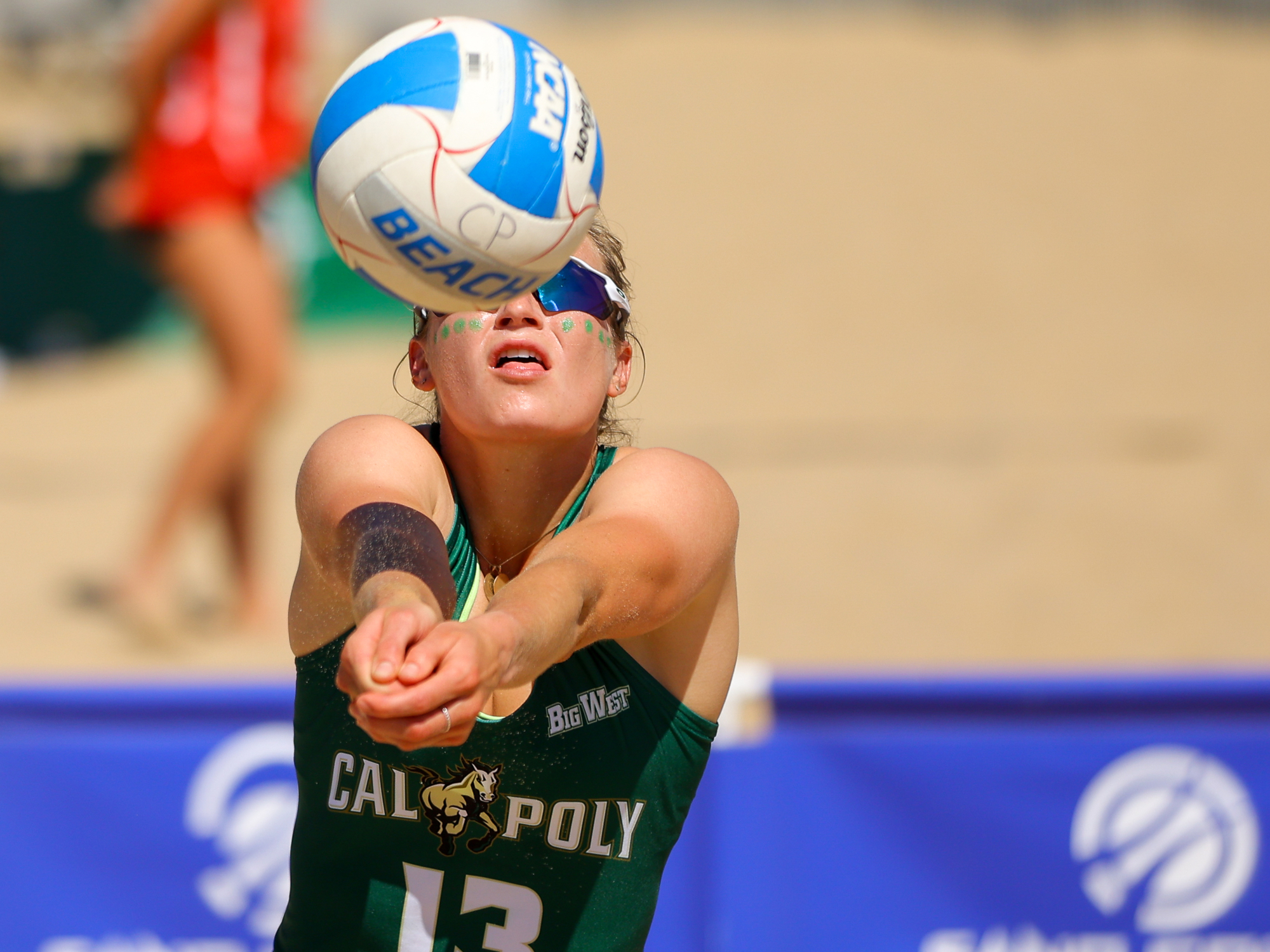 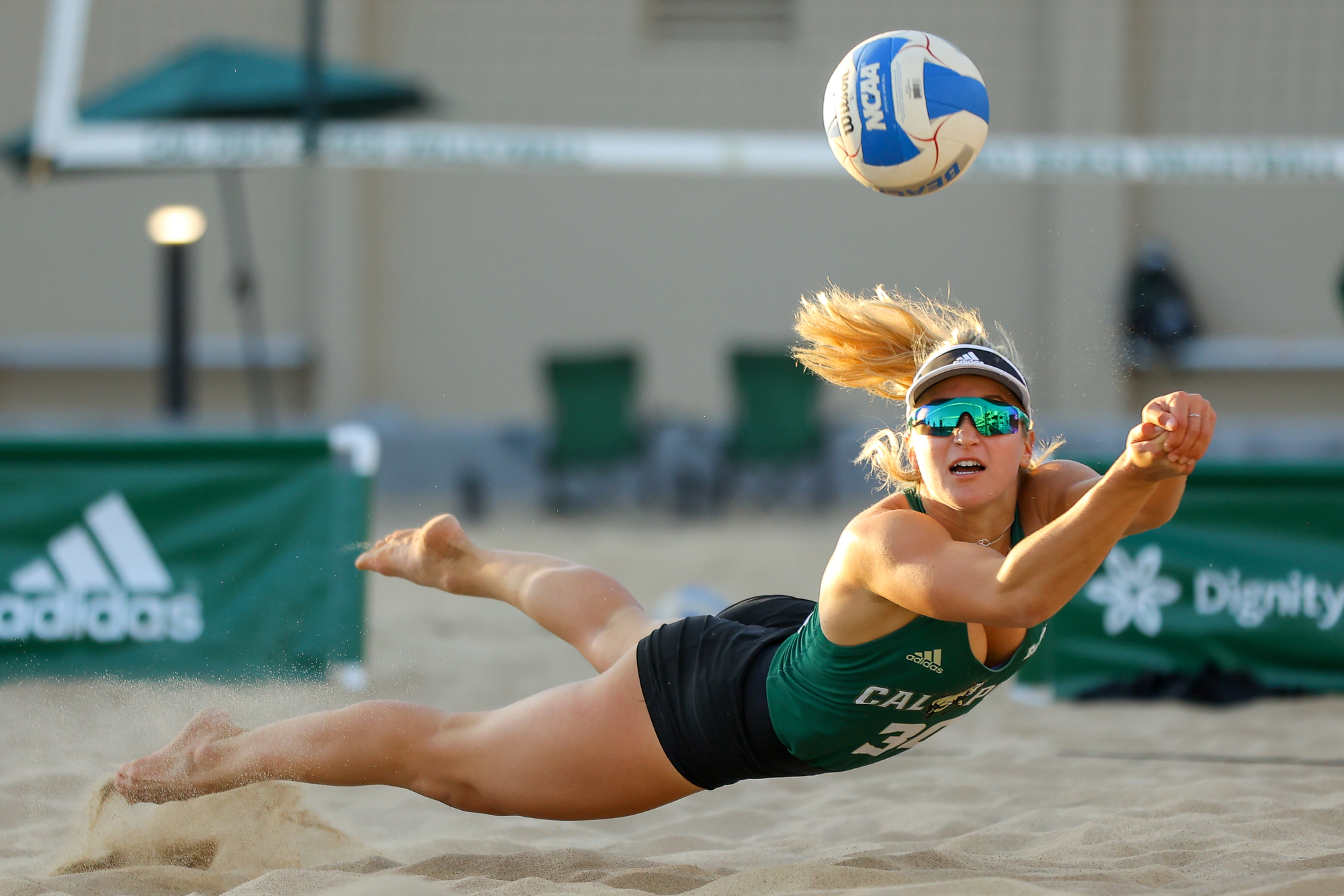 Josie Ulrich (30) dives for a dig against #10 Hawaii. Cal Poly’s matchup against Hawaii was the final and most anticipated match of the weekend. After a match win from Sonny and Gordon, the number five pairing of Ulrich and Vanessa Roscoe won their court to put the Mustangs up 2-0, setting up a 3-2 win that secured Cal Poly’s spot at the top of the Big West halfway through the season.

Cal Poly’s win streak came to a close with a 2-3 loss to #12 Stanford on April 3, but the Mustangs rebounded later that day, getting a crucial win over #9 Cal. The next weekend, Cal Poly travelled to Hawaii, where they won two in a three match series with their conference rival.

The Second Annual Center for Effort Challenge in San Luis Obispo proved to be the Mustangs toughest challenge thus far. The tournament featured five of the top ten teams in nation: #1 UCLA, #2 USC, #5 Loyola Marymount, #6 Cal Poly and #8 Grand Canyon. The Mustangs struggled, only managing to edge a win over Grand Canyon and losing to the higher ranking schools. 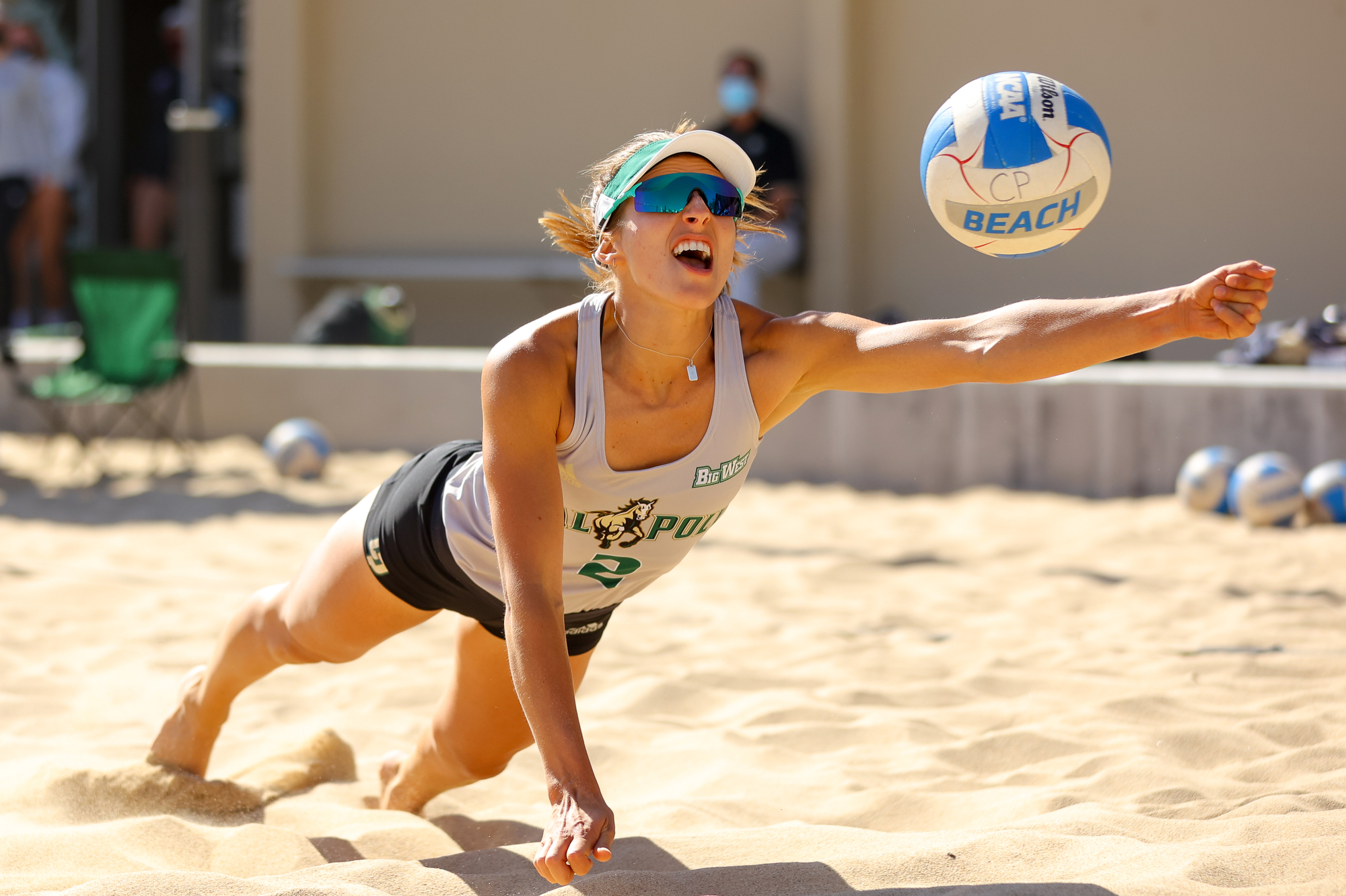 Tia Miric (2) reaches for the ball to defend a spike from USC. Cal Poly was swept by the Trojans. 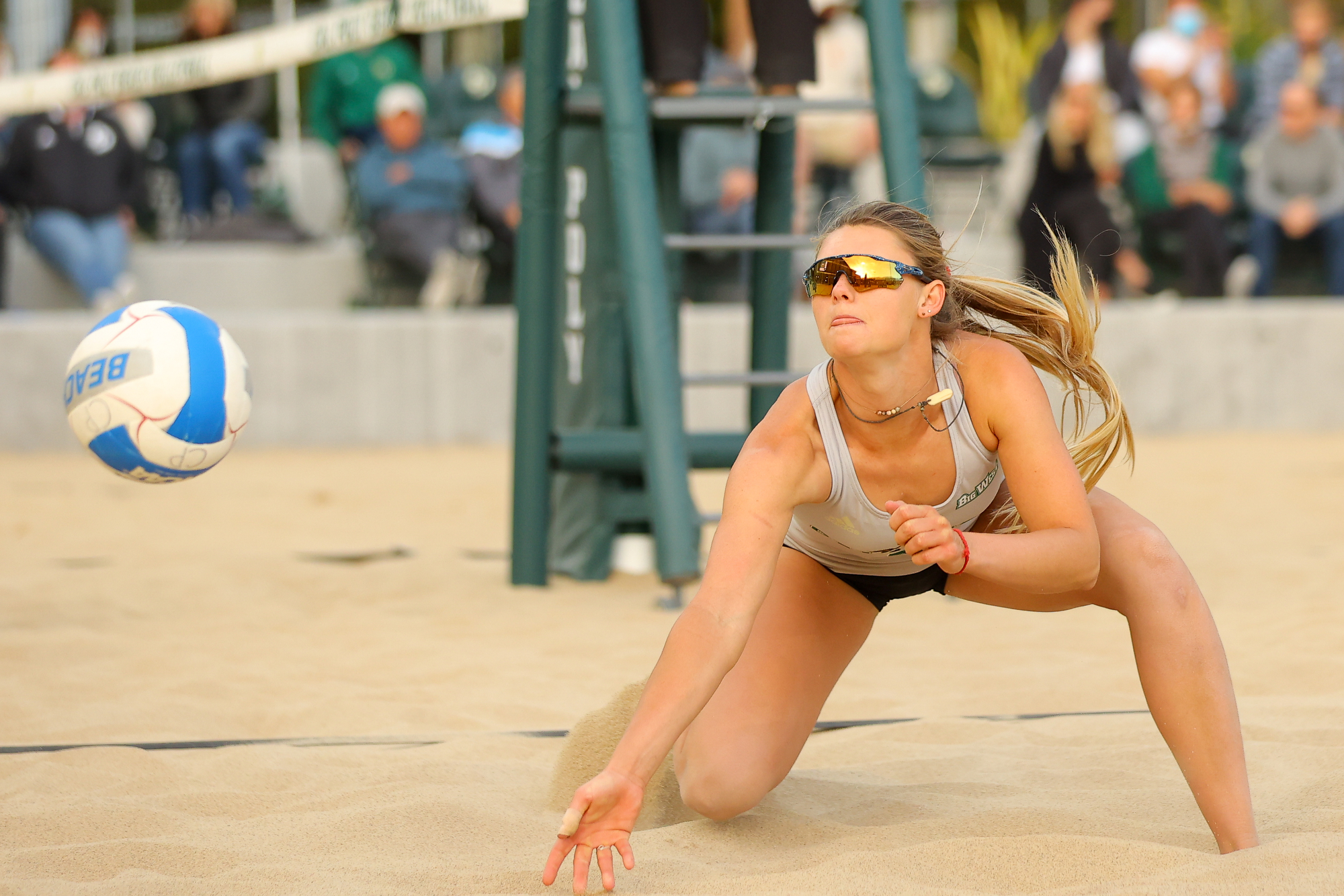 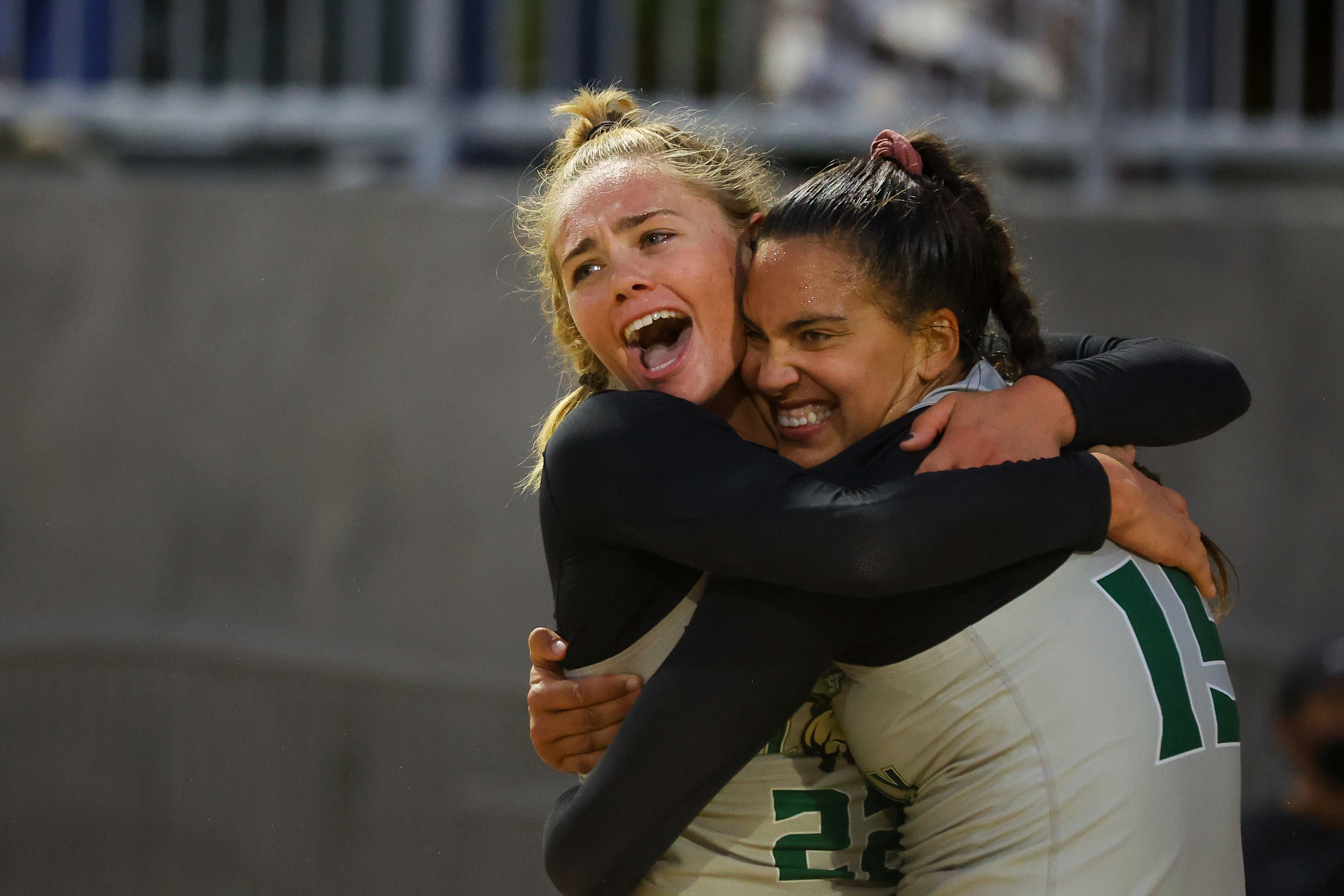 Left: Jayelin Lombard (3) lunges forward for the ball against Grand Canyon. The second pairing of Lombard and Amy Ozee completed a comeback in order to push Cal Poly to a 2-0 lead in the match. Right: Sam Strah (22) and Eleonore Johansen (15) celebrate a third-set win that secured a Cal Poly victory over Grand Canyon. Representative of the Mustangs’ showing at the tournament, Strah and Johansen’s win against Grand Canyon was their only match win of the weekend. 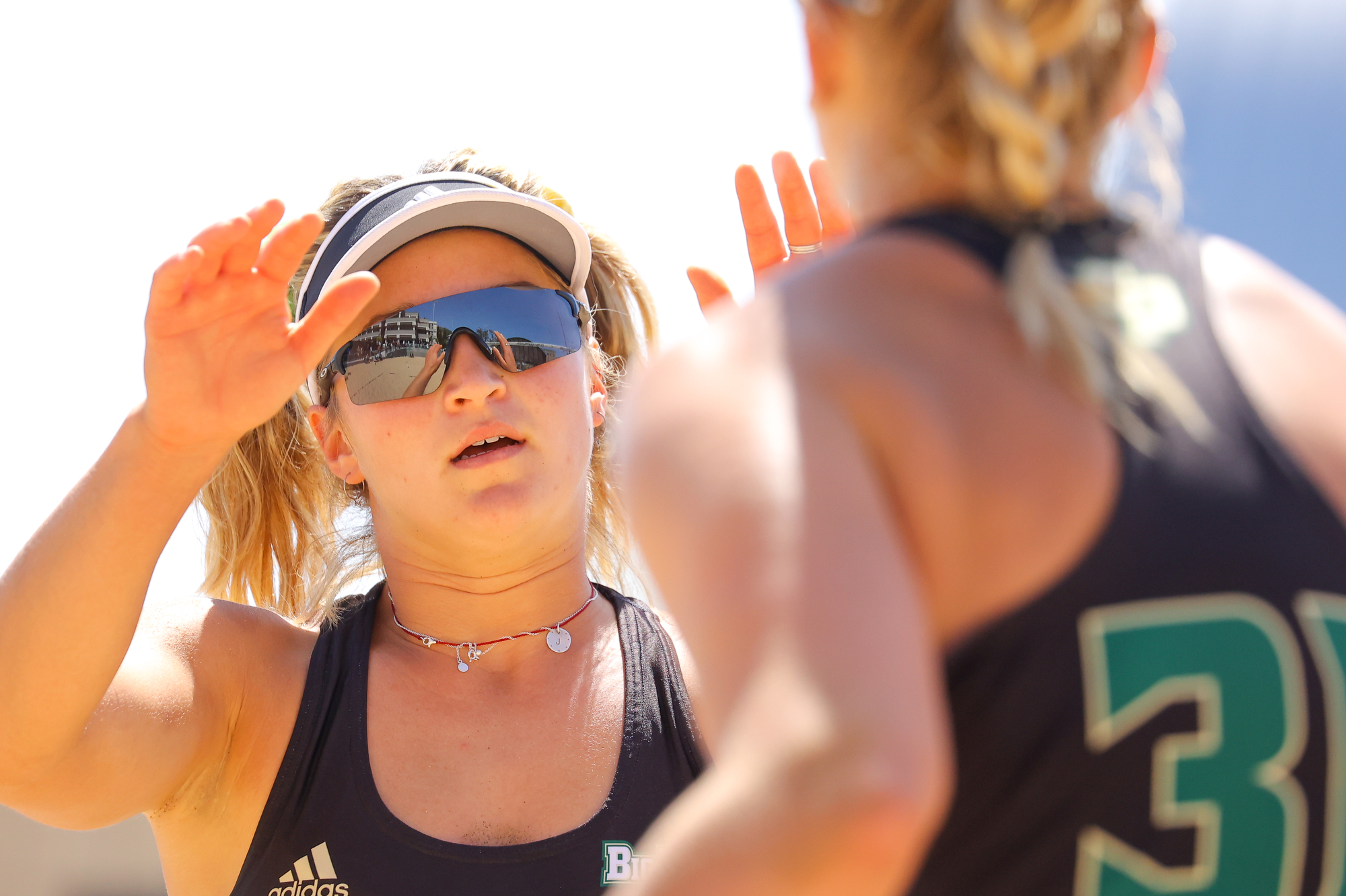 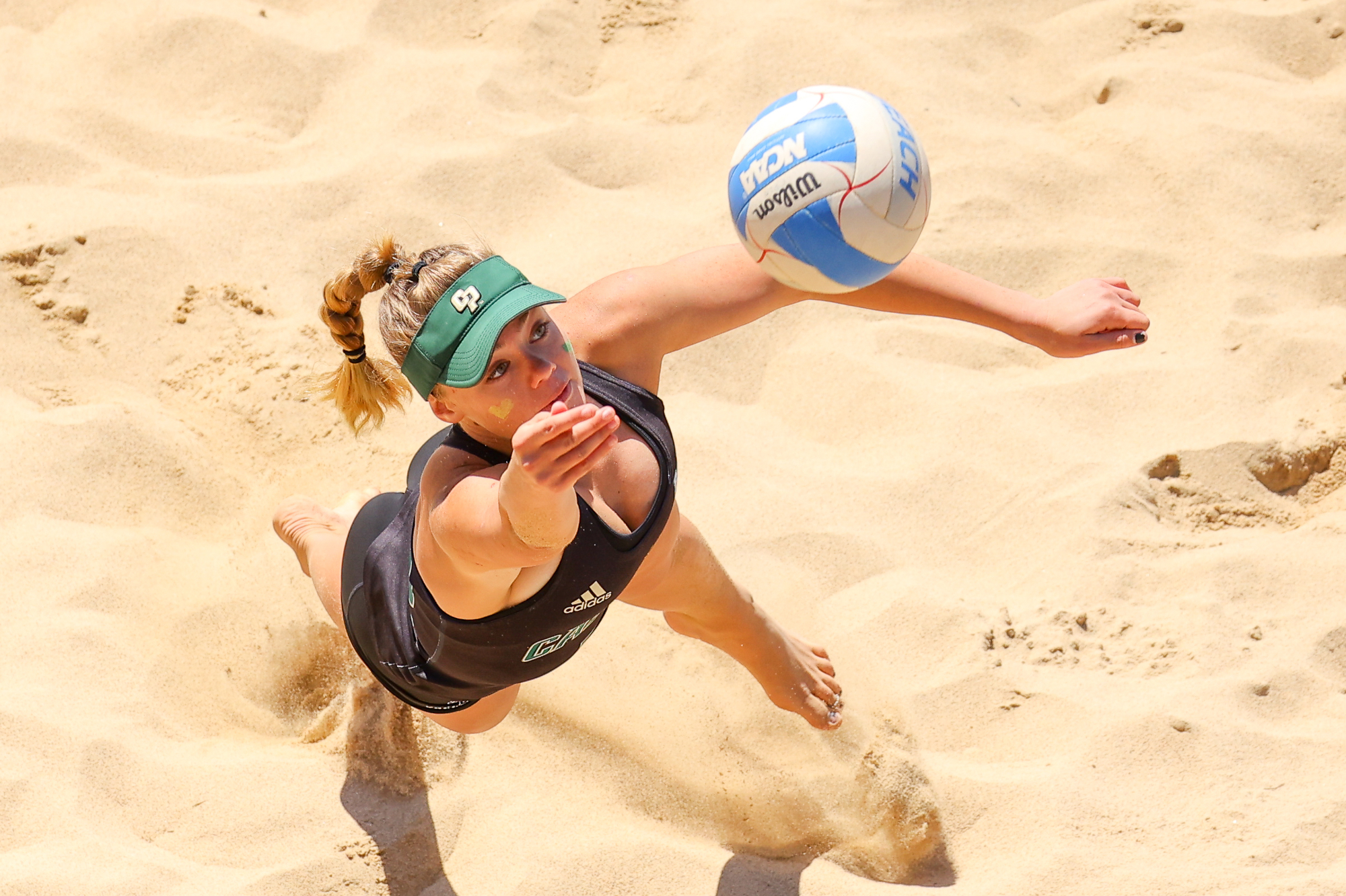 Left: Josie Ulrich (30) looks to regroup with teammate Vanessa Roscoe (31) as the pair struggles against UCLA. Right: Sam Strah (22) reaches up to return a spike from her UCLA opponents. 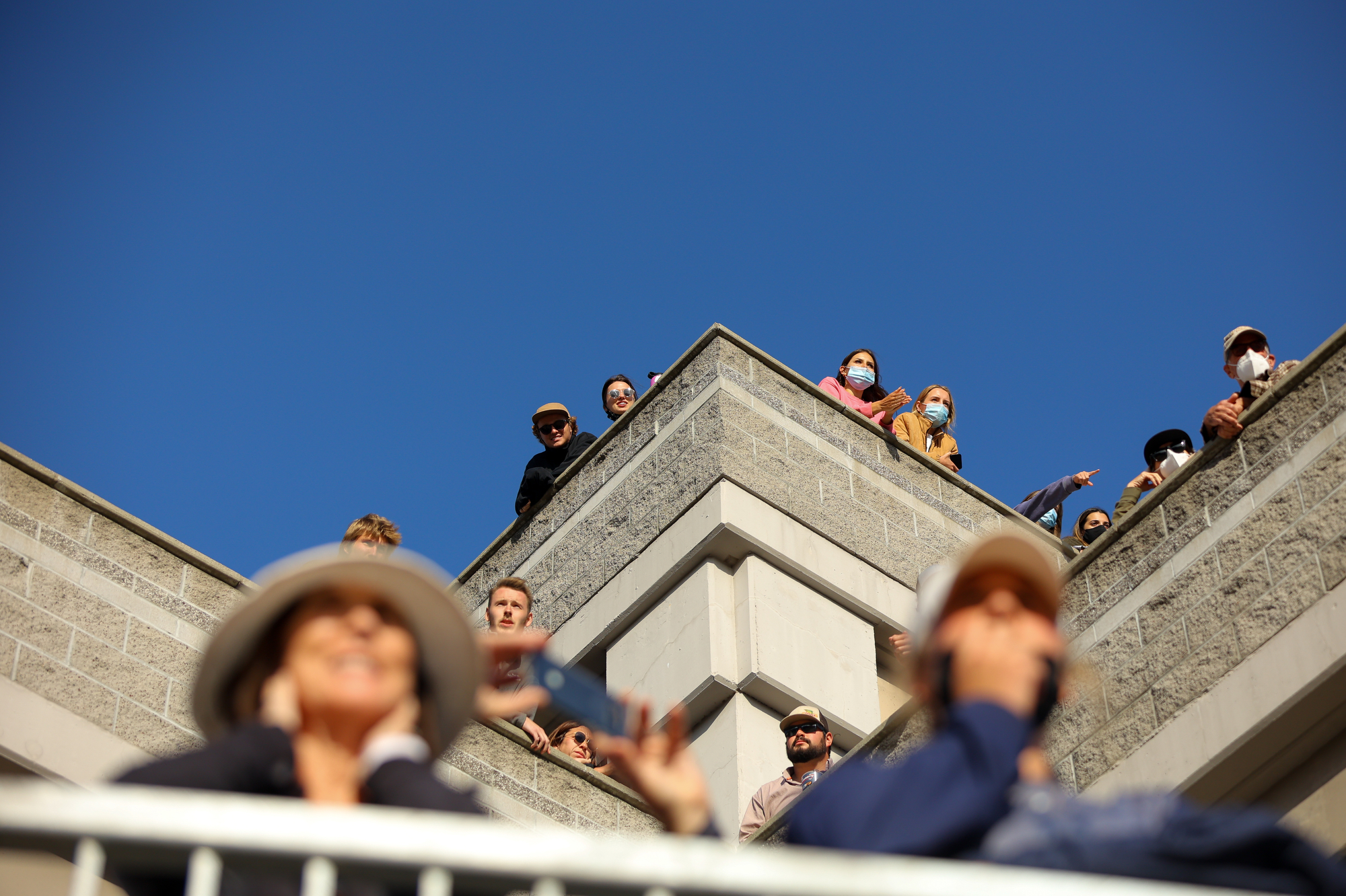 Onlookers watch as Cal Poly takes on Loyola Marymount from every level of the PAC Parking Structure. The Center for Effort Challenge marked the first weekend that fans were encouraged to attend to cheer on beach volleyball in more than a year. Due to COVID-19 concerns, Cal Poly Athletics had discouraged any fan attendance at previous matches. 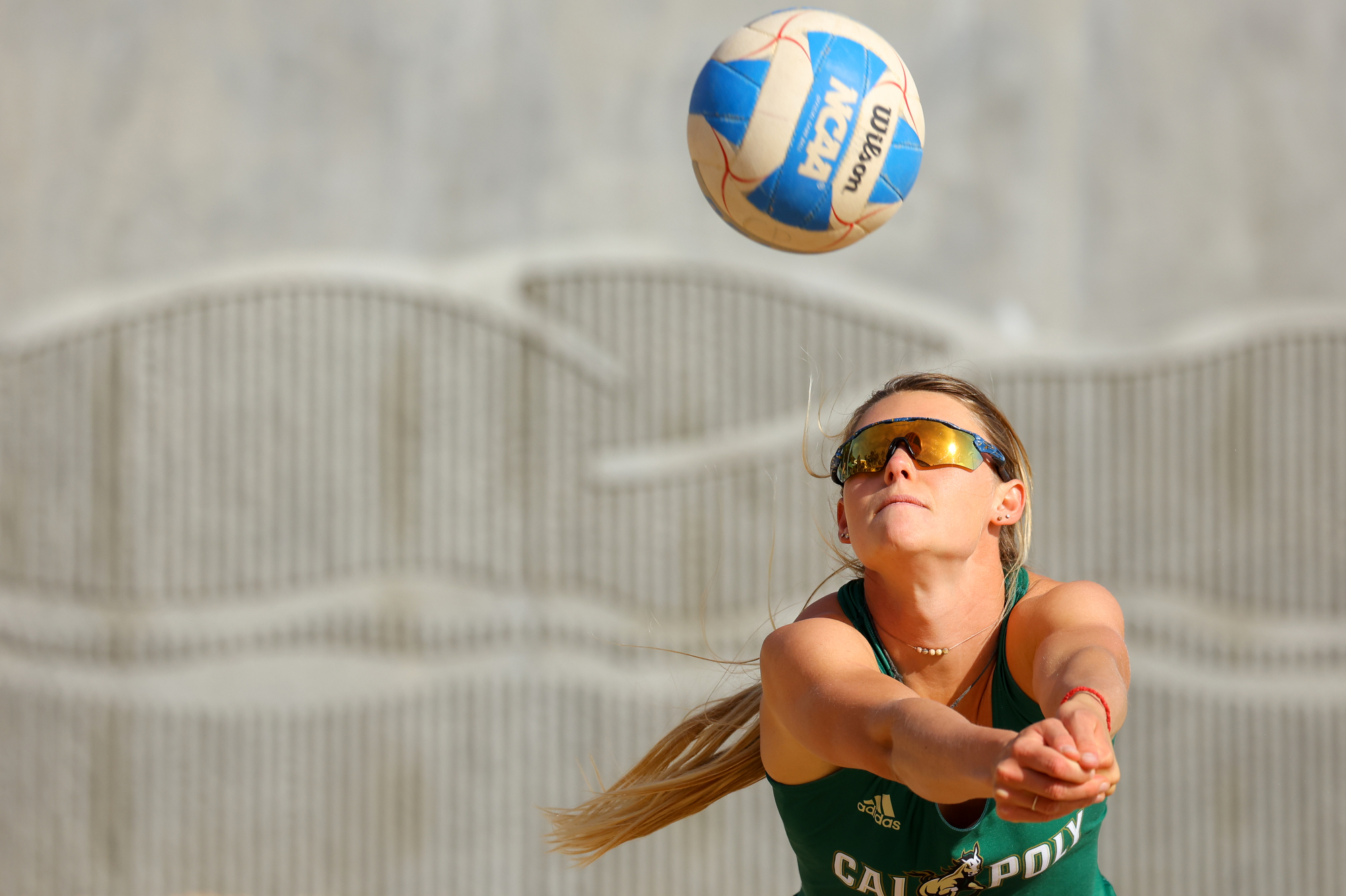 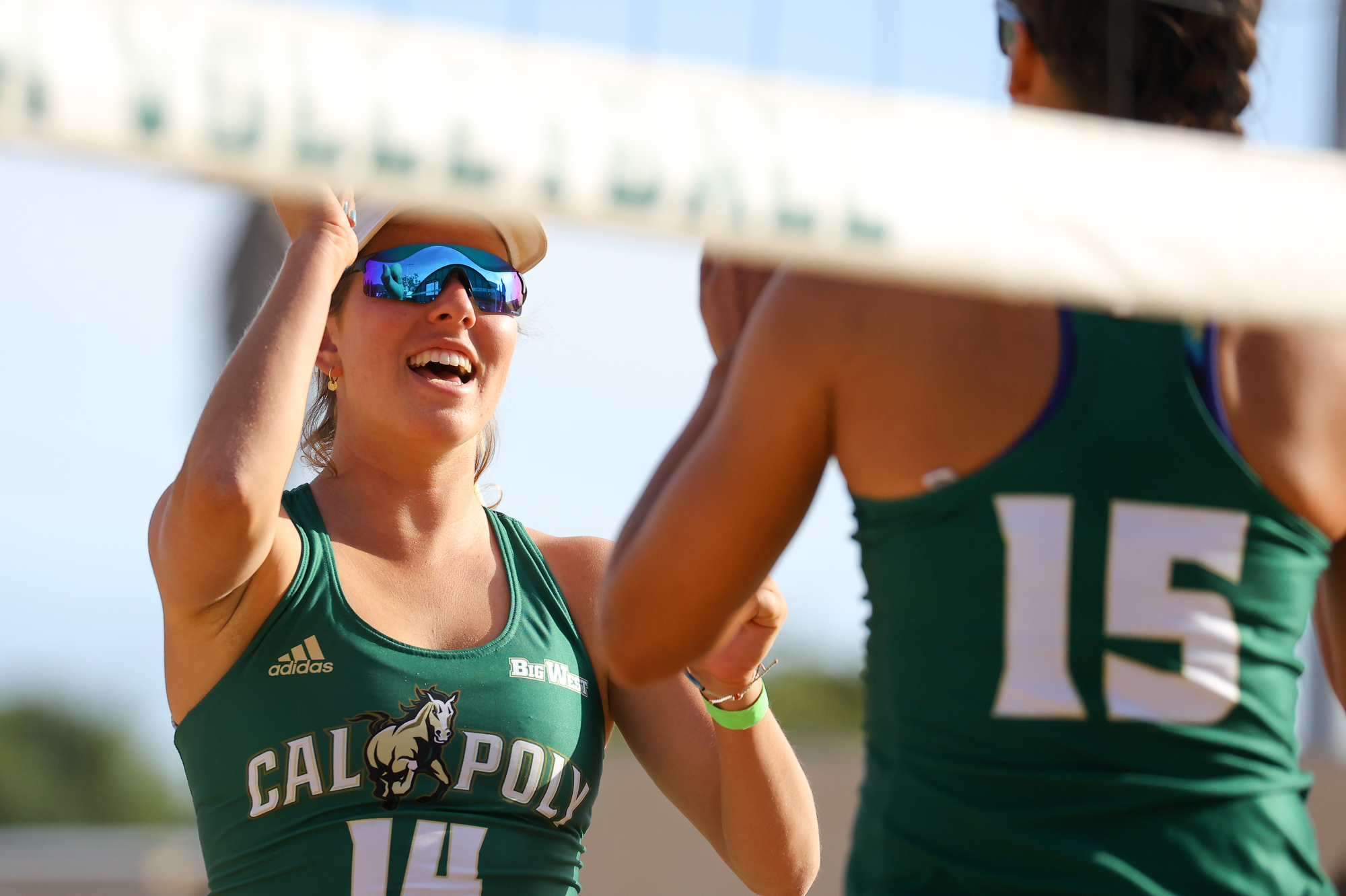 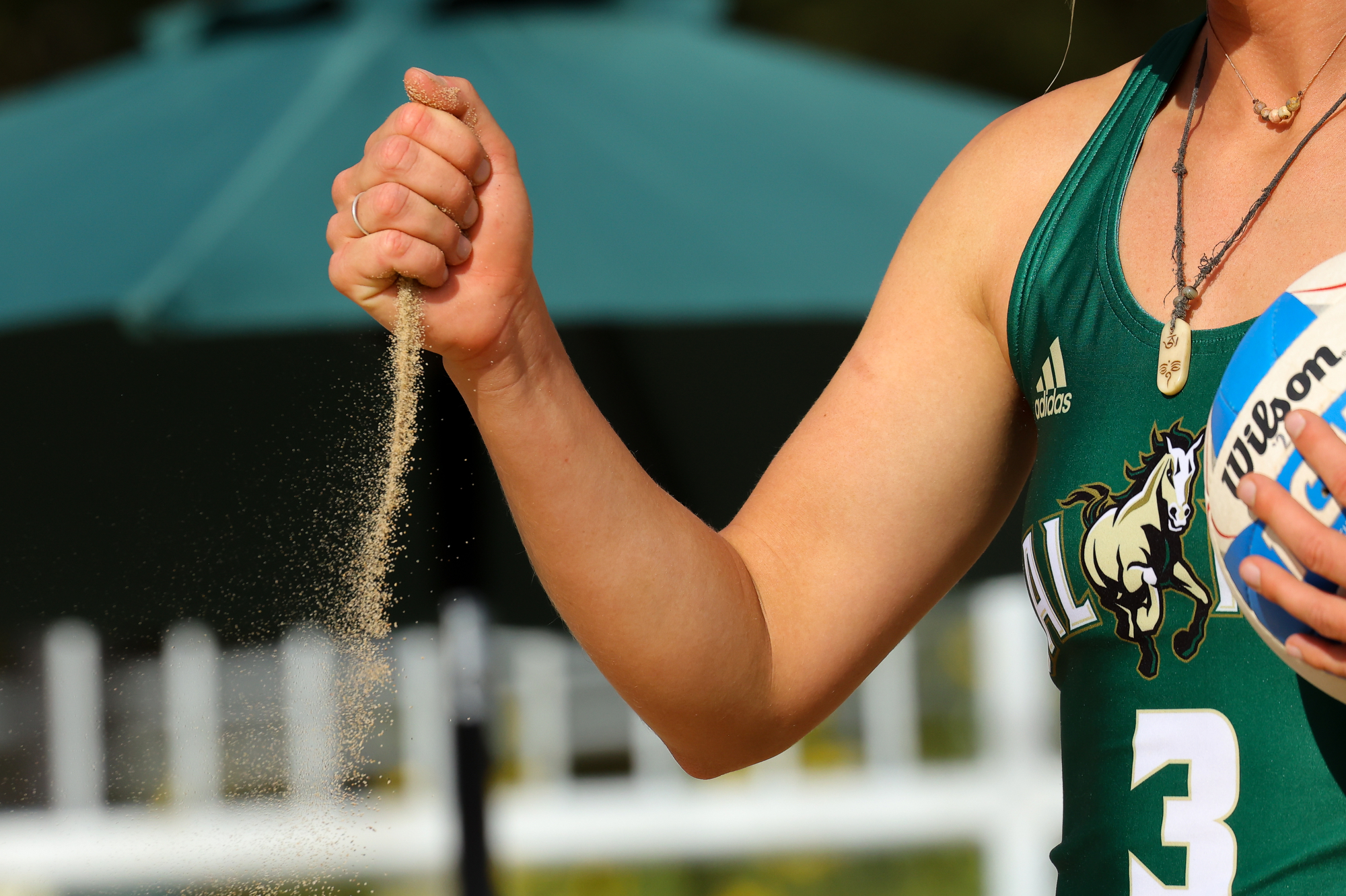 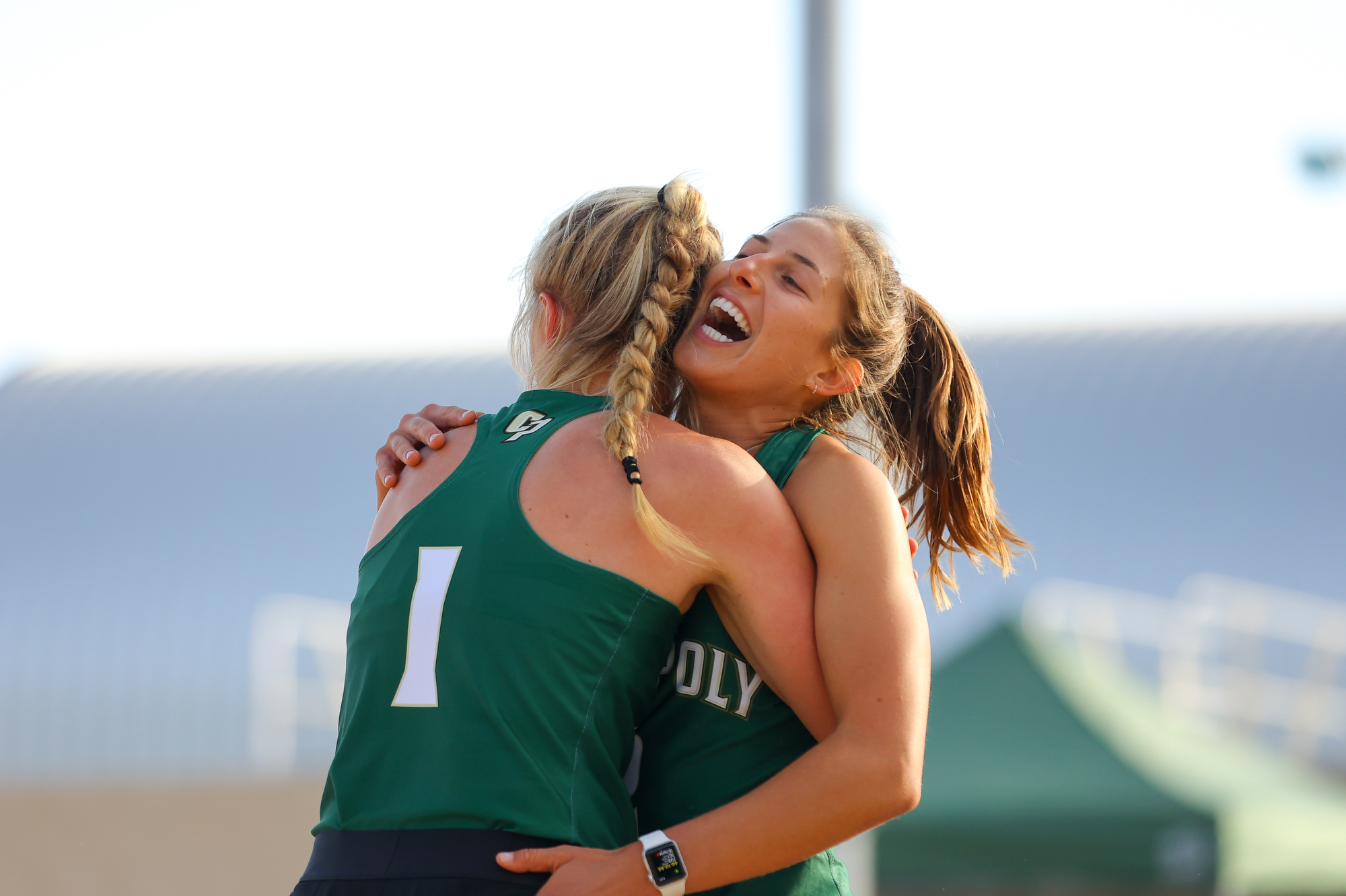 Left: Jayelin Lombard (3) rains sand from her hand to judge the wind before serving. Right: Mariah Whalen (1) and Tia Miric (2) embrace as they complete a 5-0 victory over Santa Clara. 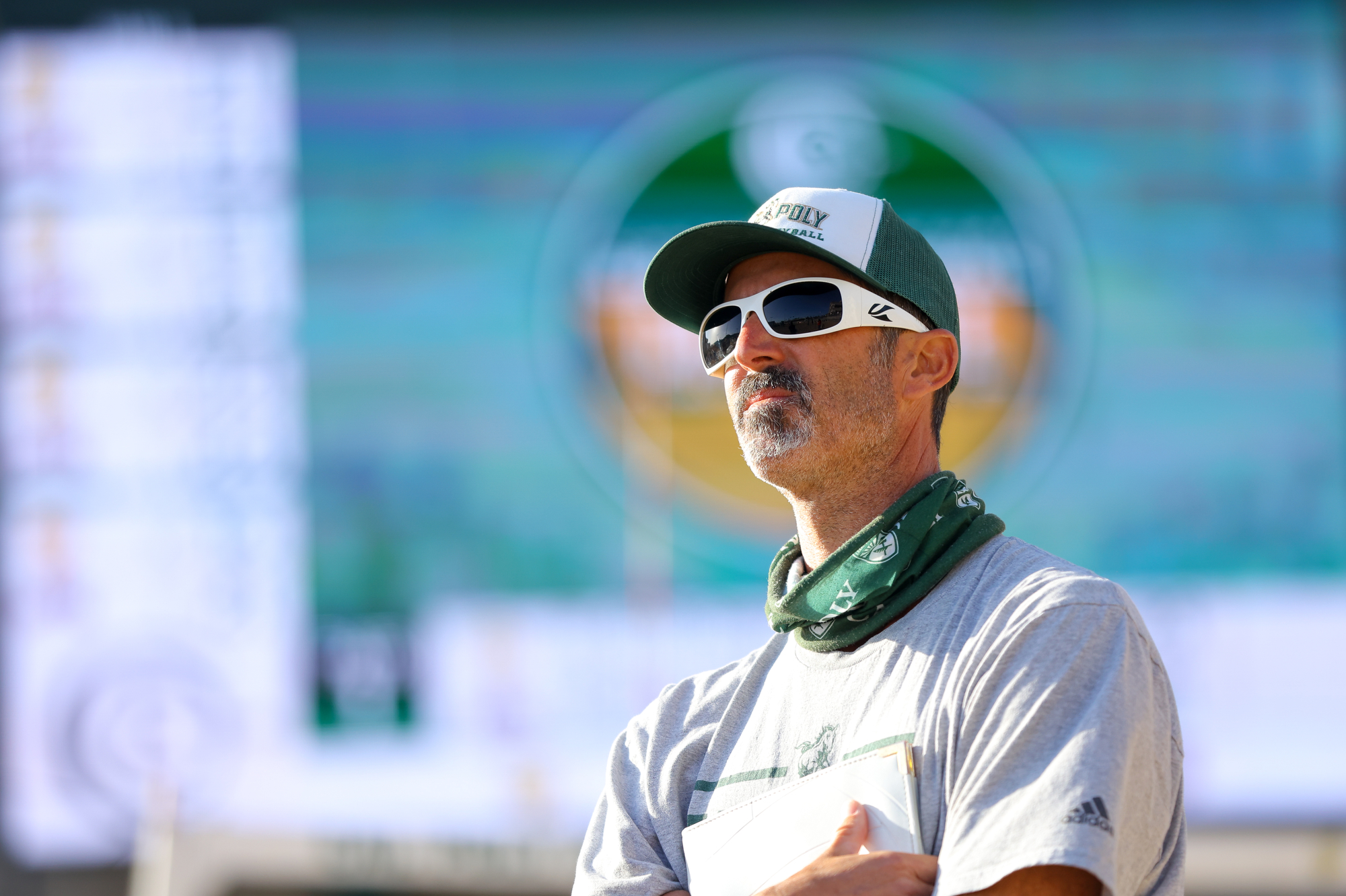 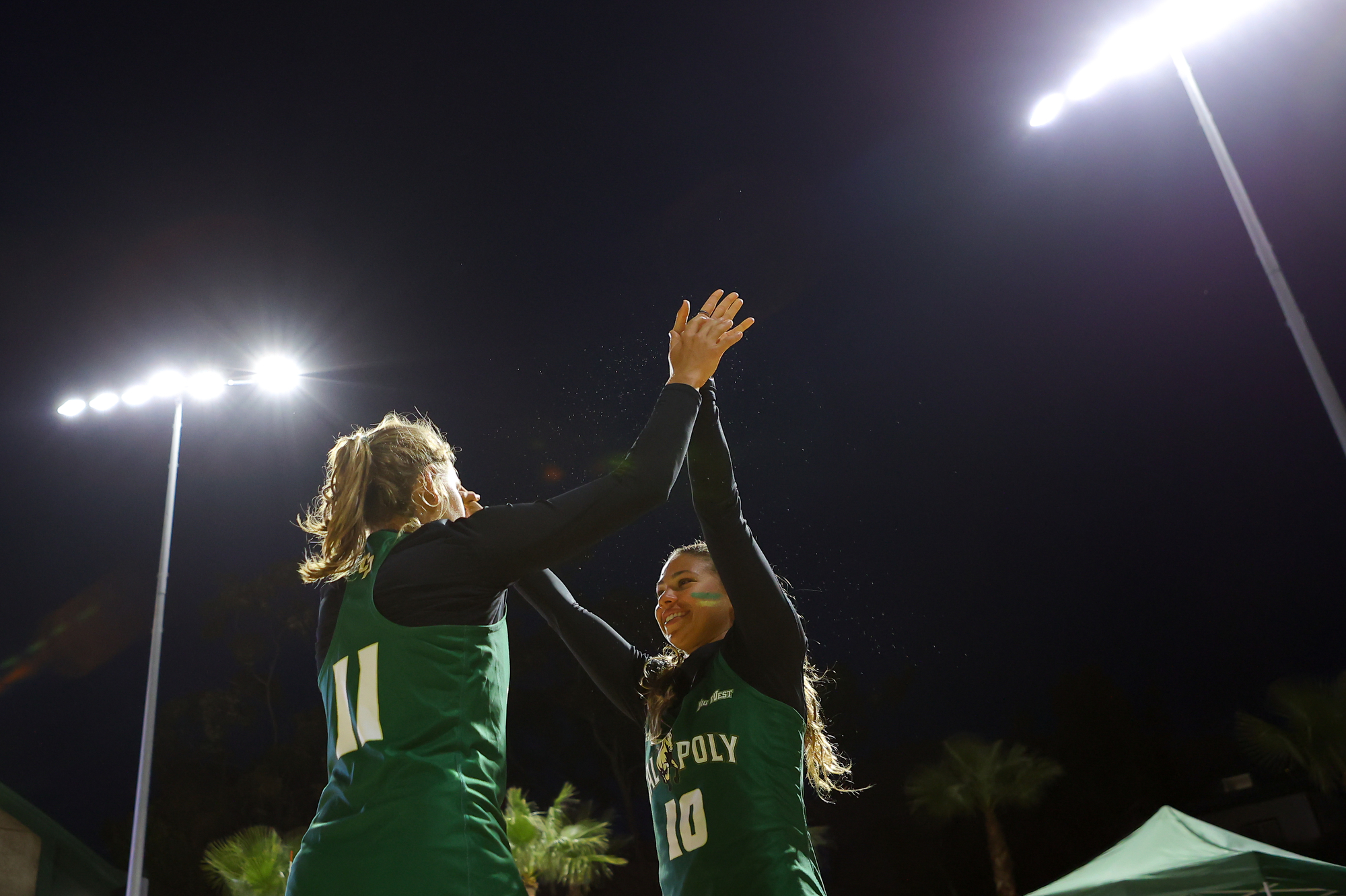 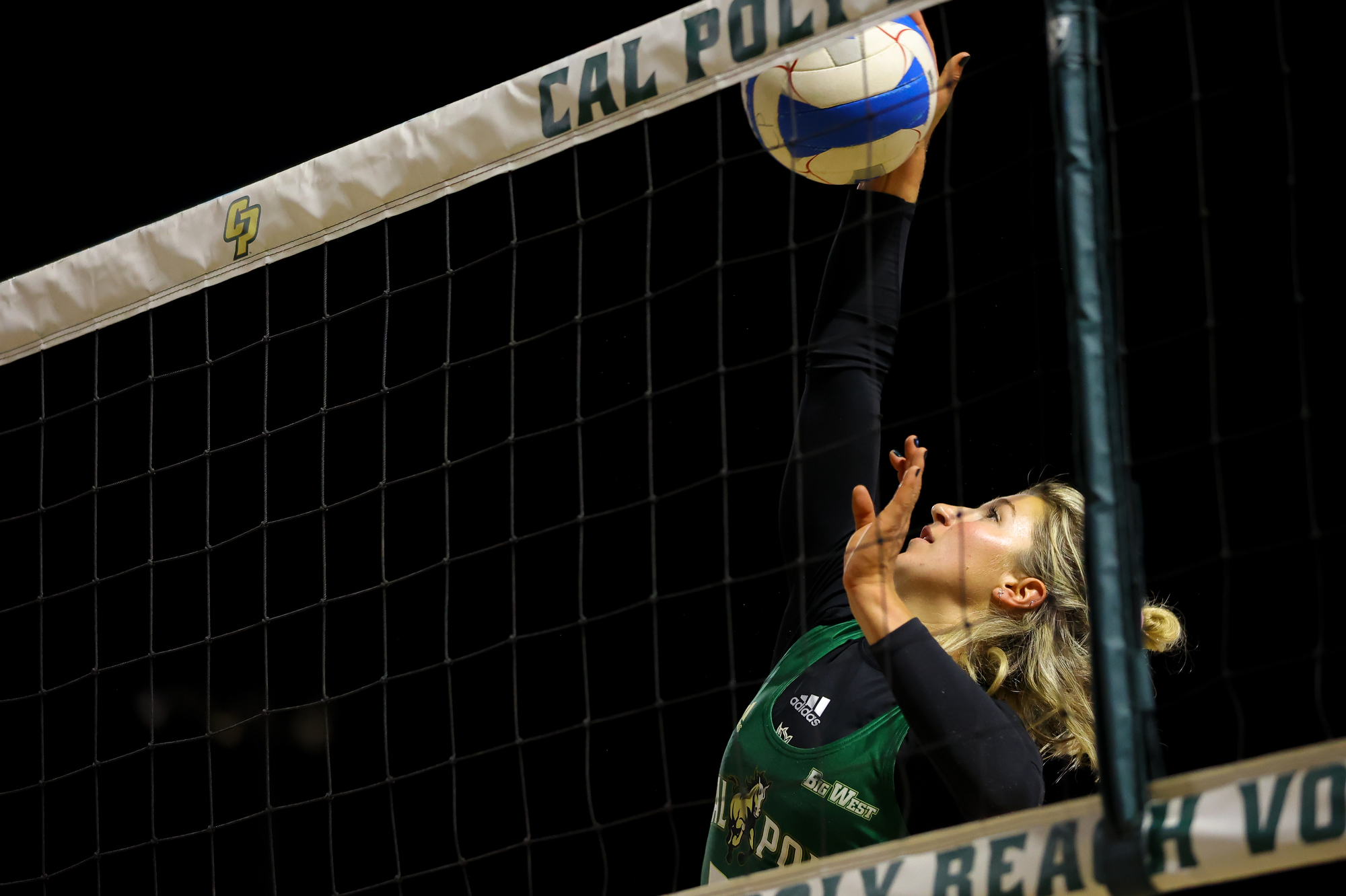 Left: Emily Sonny (11) and Macy Gordon (10) finish their pregame ritual with an embrace under the floodlights of Swanson Beach Volleyball Complex before taking on St. Mary’s. Right: Josie Ulrich (30) spikes the ball against St. Mary’s in the third set. Despite Ulrich and Roscoe’s loss in the third set, Cal Poly secured a win over St. Mary’s with match wins from Sonny/Gordon, Lombard/Ozee and Whalen/Miric. 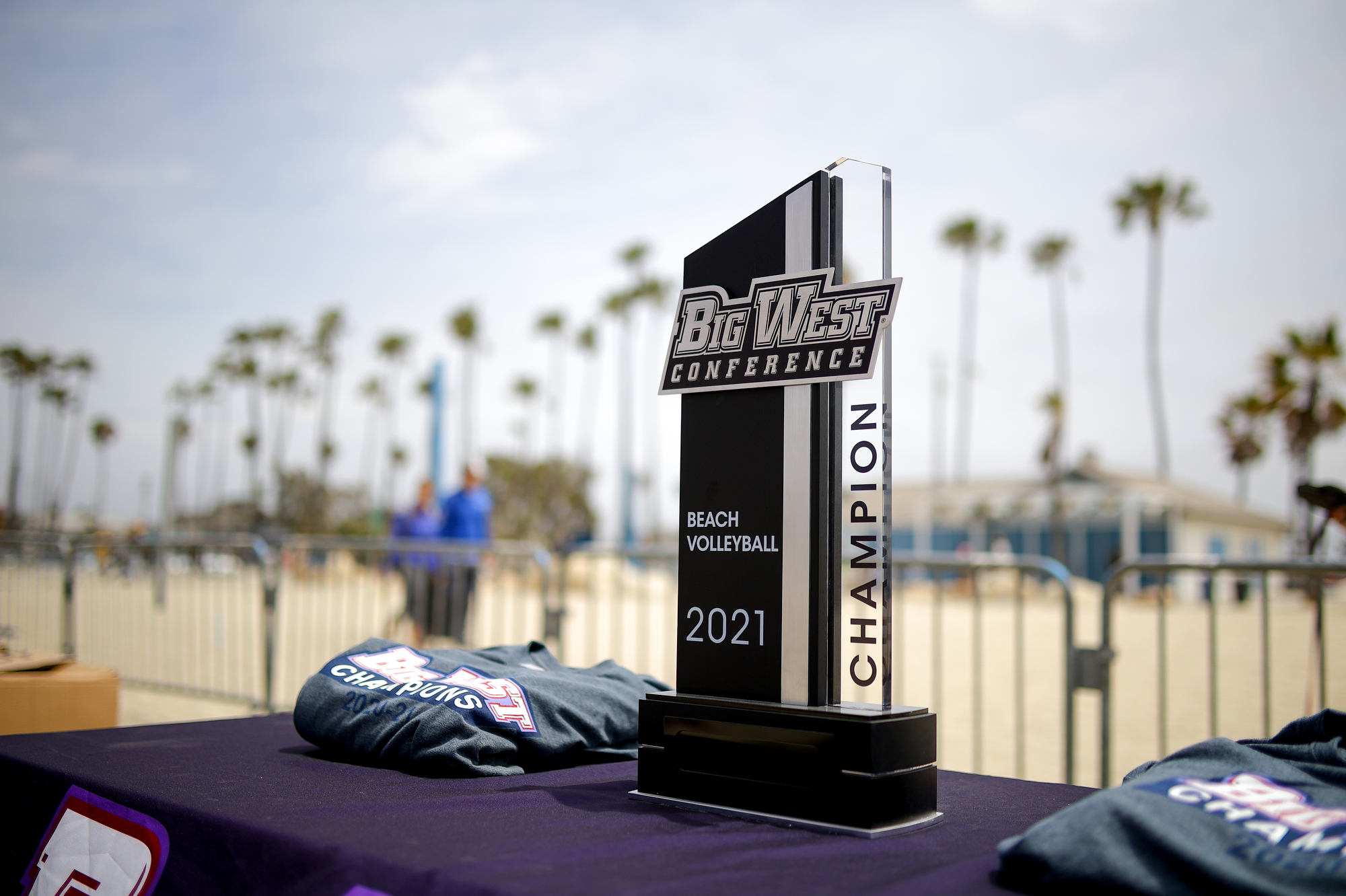 The Big West Conference Champion trophy sits on a table at the edge of the courts, awaiting a winner. Cal Poly returns as the defending champions, previously lifting the trophy in 2019. There was no championship tournament in 2020 due to COVID-19 shutdowns. 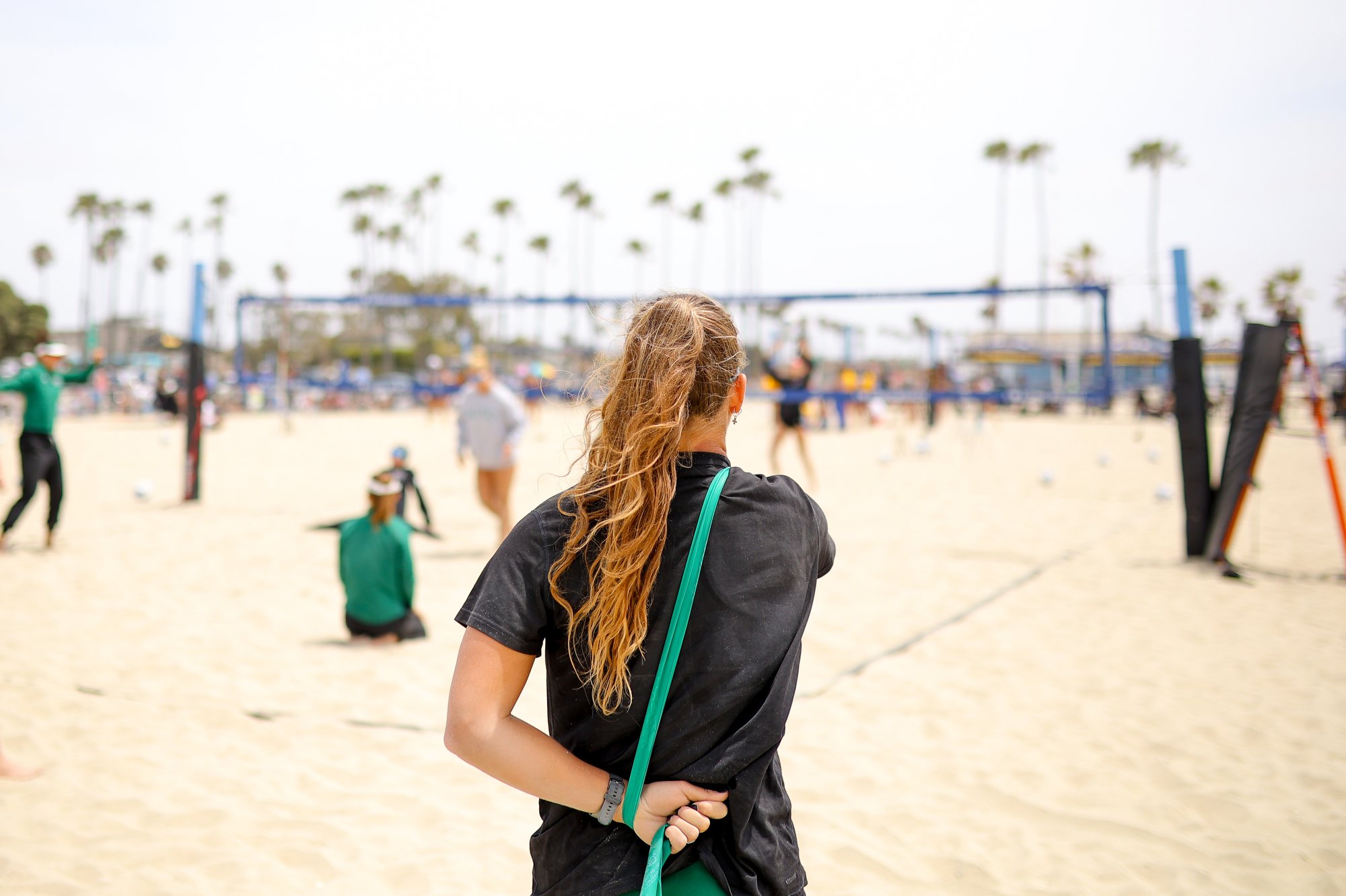 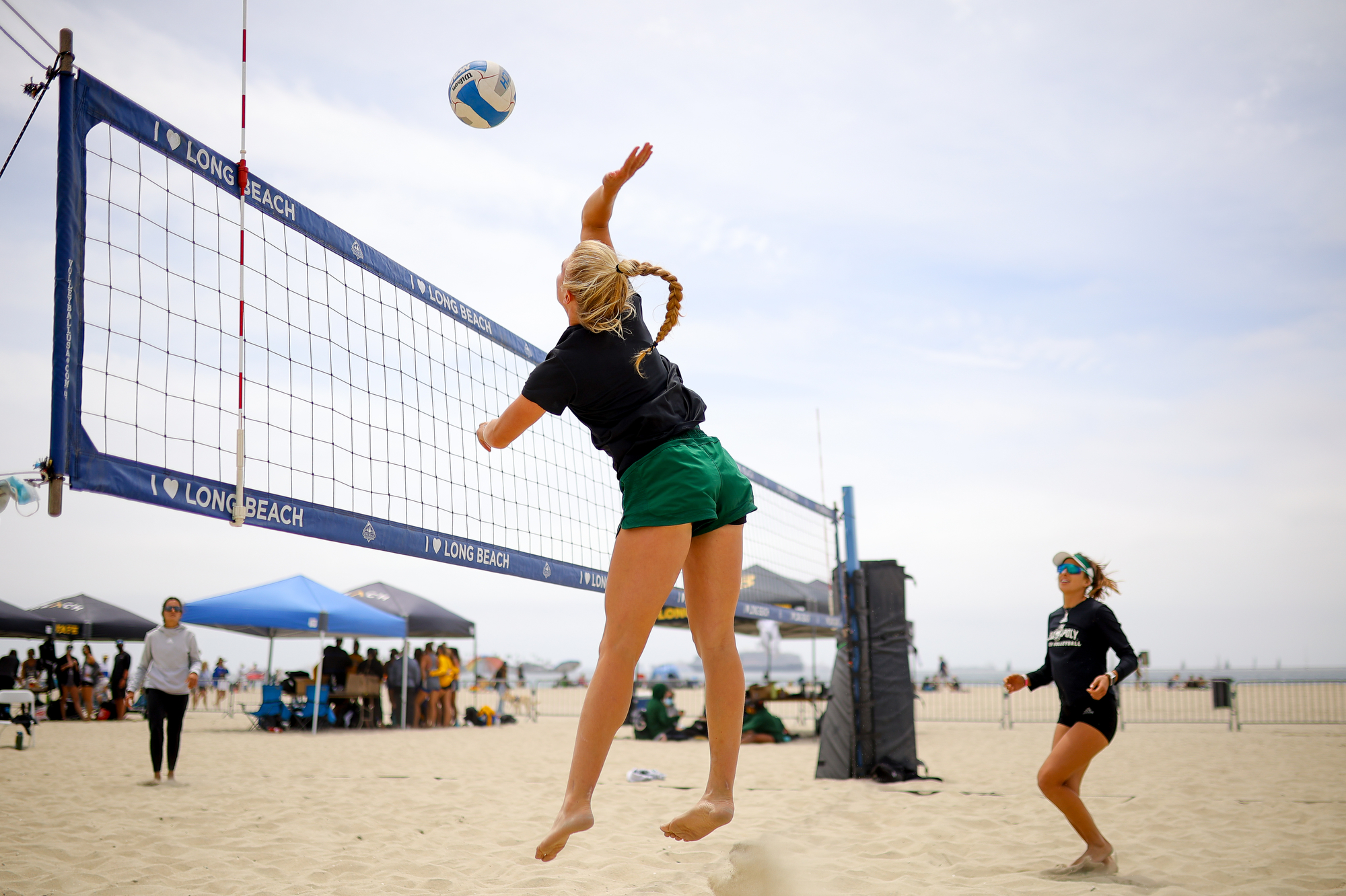 Macy Gordon (left) and Mariah Whalen (right) warm up before taking on Long Beach State in the semi-final match. Earlier in the day, Cal Poly lost to Hawaii, sending the Mustangs to the elimination bracket to face Long Beach State. 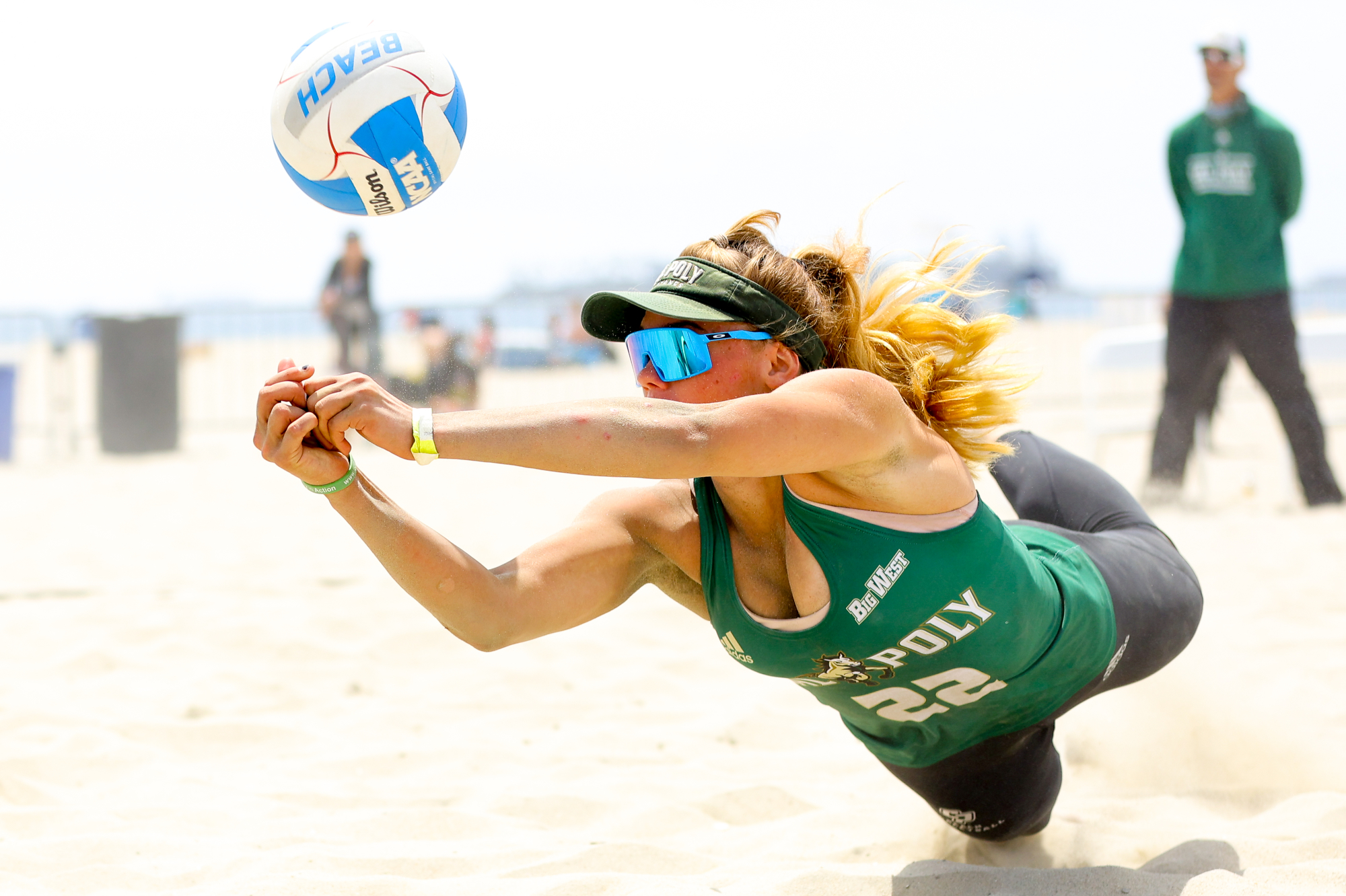 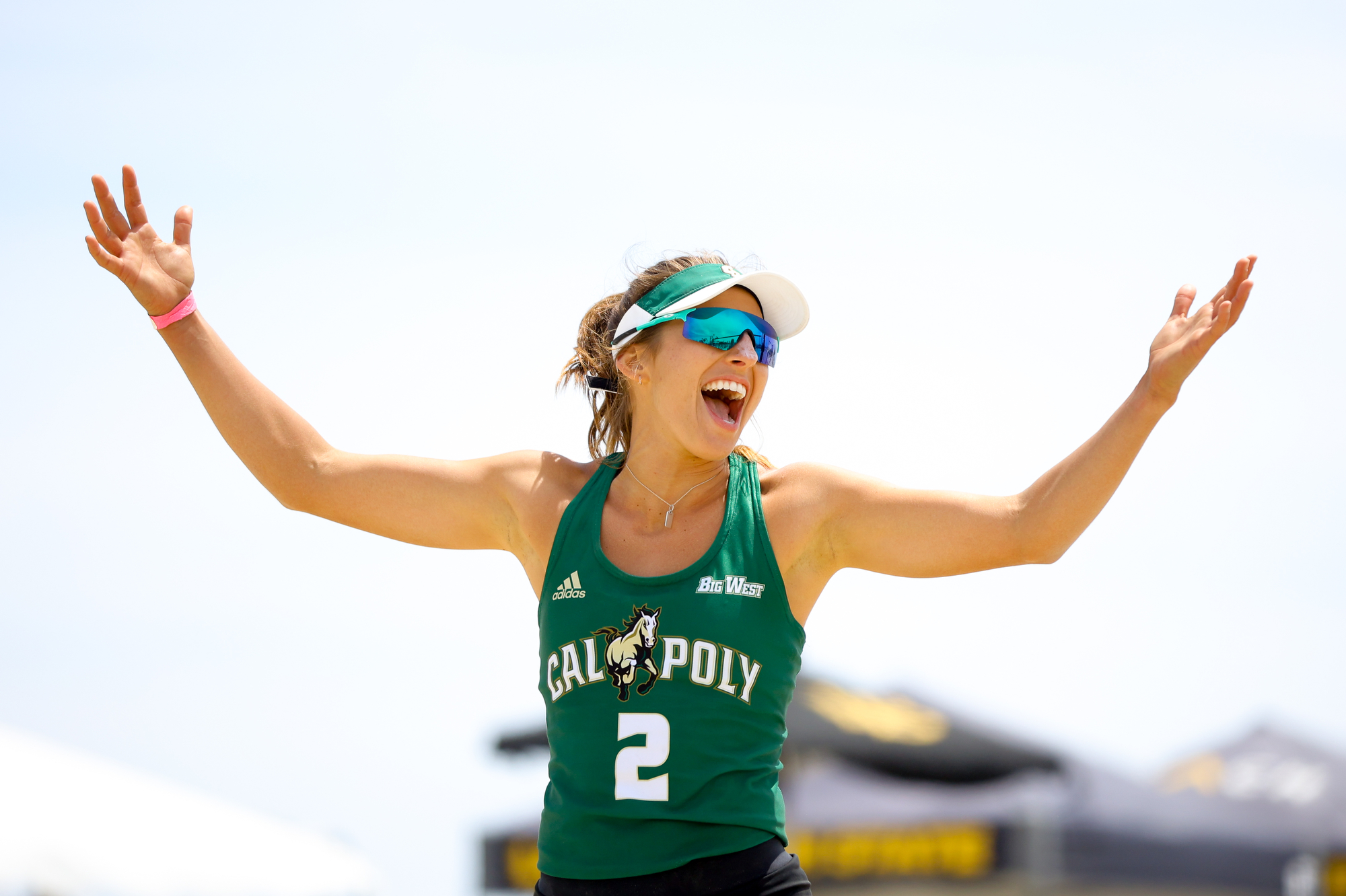 Left: Sam Strah (22) dives for a dig in the third set against Long Beach State. Strah and Eleonore Johansen kept the match on court 4 close, with the first set going to 31 points. In the end, however, the pair couldn’t hold off Beach. Right: Tia Miric (2) celebrates winning her court. Miric and Whalen’s match win clinched the semi-final win over Long Beach State for the Mustangs, advancing Cal Poly to the finals against Hawaii. 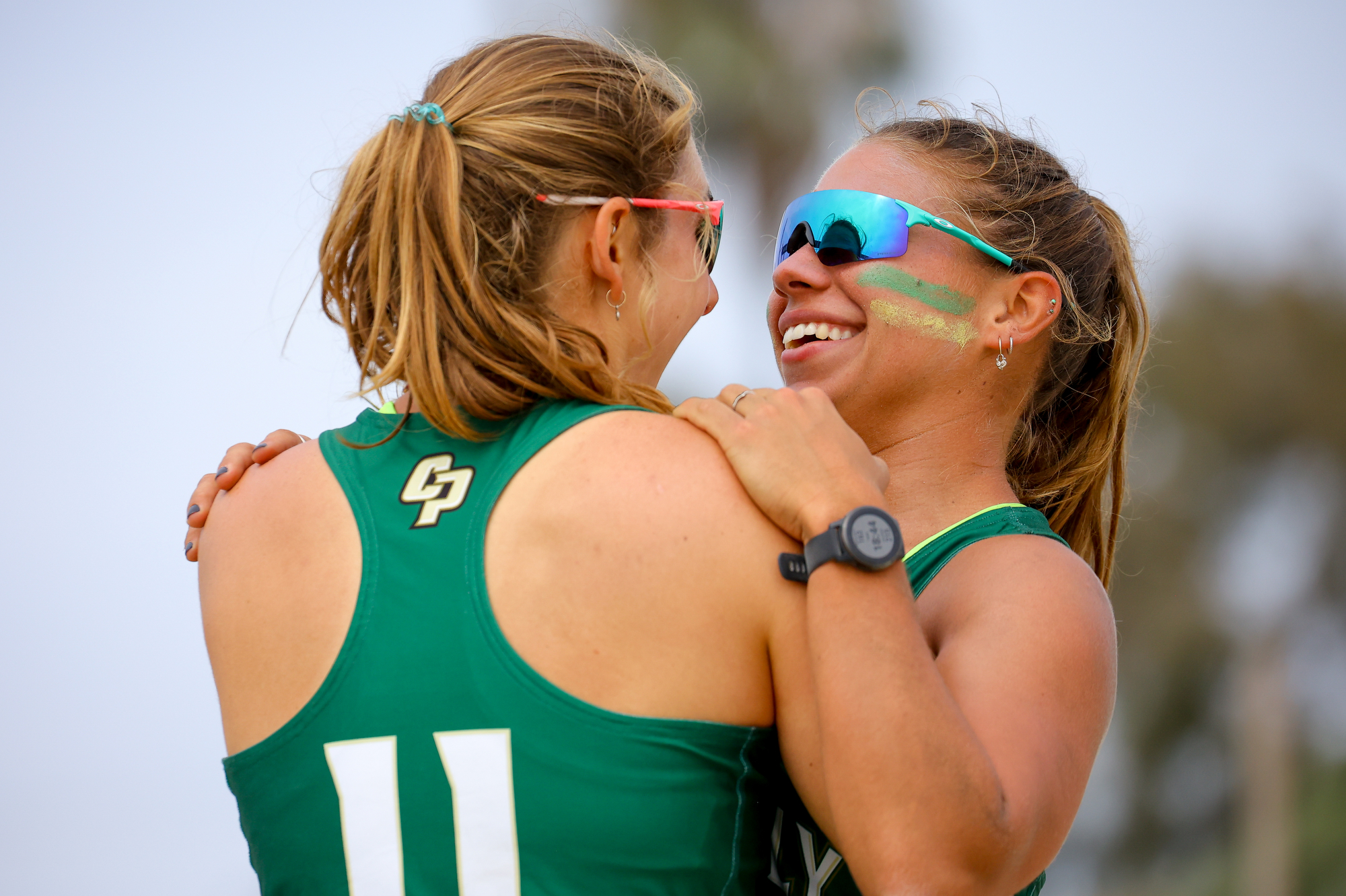 Emily Sonny (11) and Macy Gordon (10) embrace after winning their match over Long Beach State. The victory marked Sonny’s 100th career pairs win, making her the player with the most wins in Cal Poly program history. The senior would win one more during the season, boosting her to 101 total career wins. 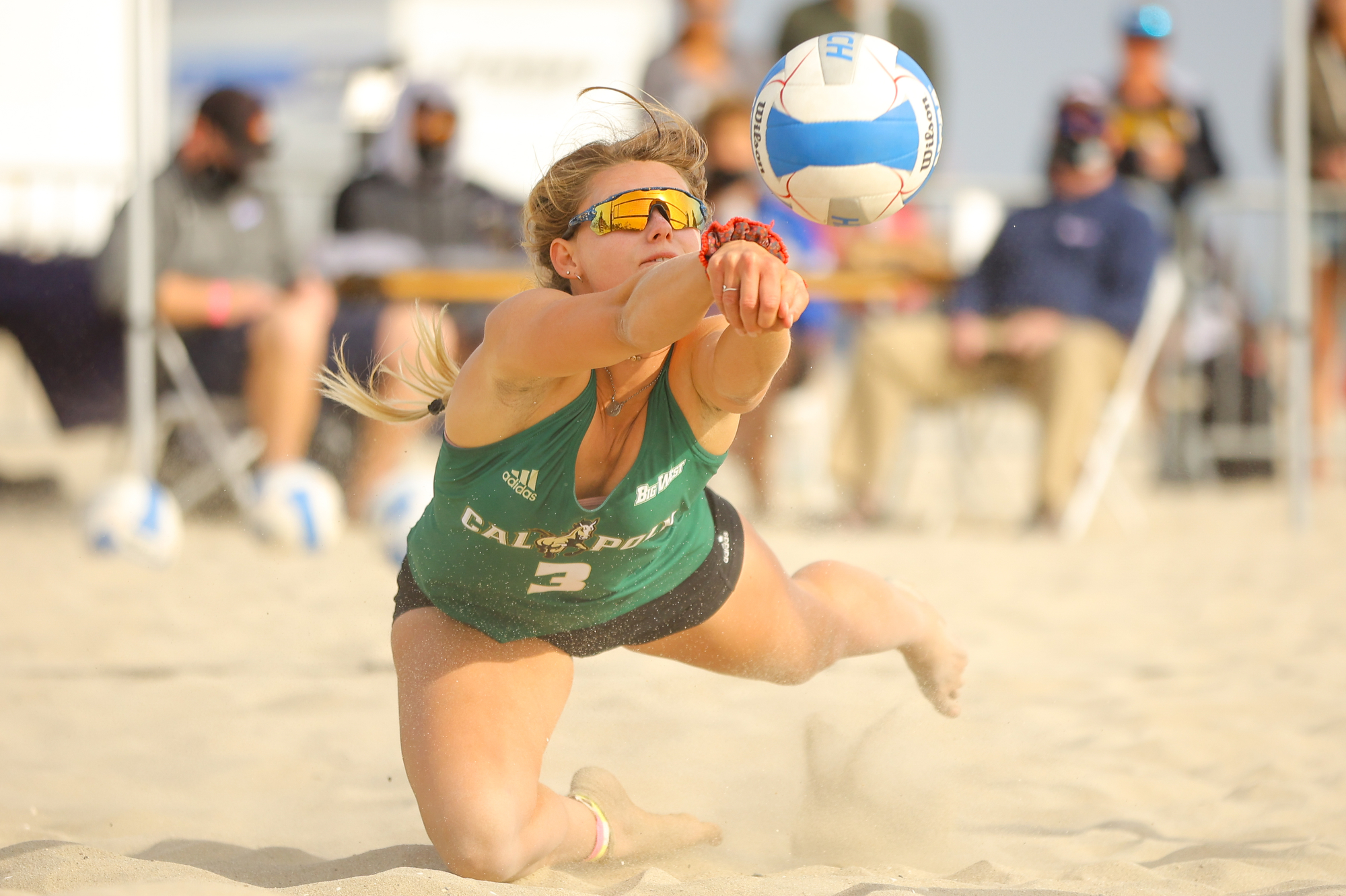 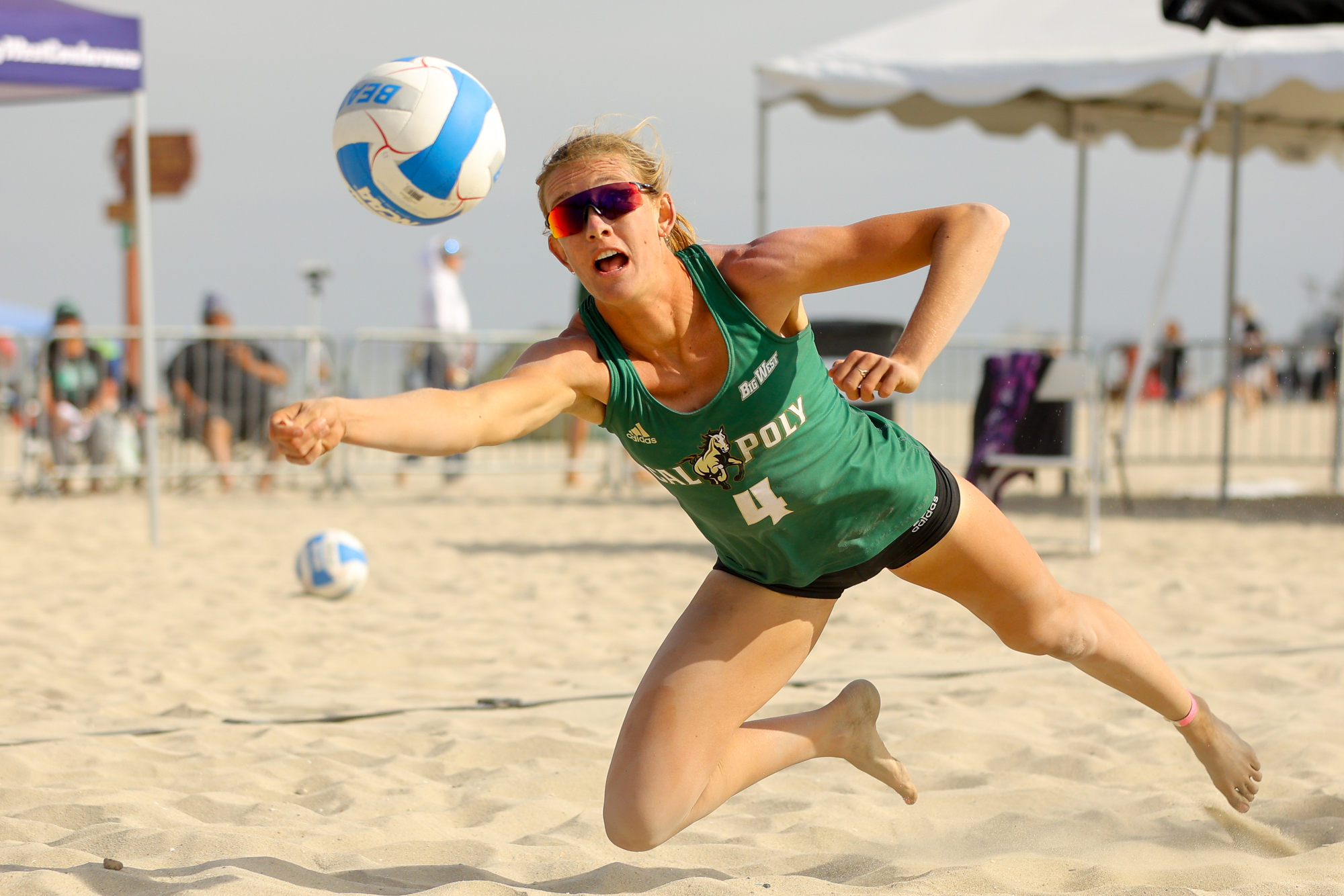 Left: Jayelin Lombard (3) lunges forward for a dig in the championship match against Hawaii. Right: Amy Ozee (4) reaches out while airborne to dig a spike from Hawaii. The pair of Lombard and Ozee were one of the two Cal Poly pairs to win their courts in the loss against Hawaii earlier that morning. 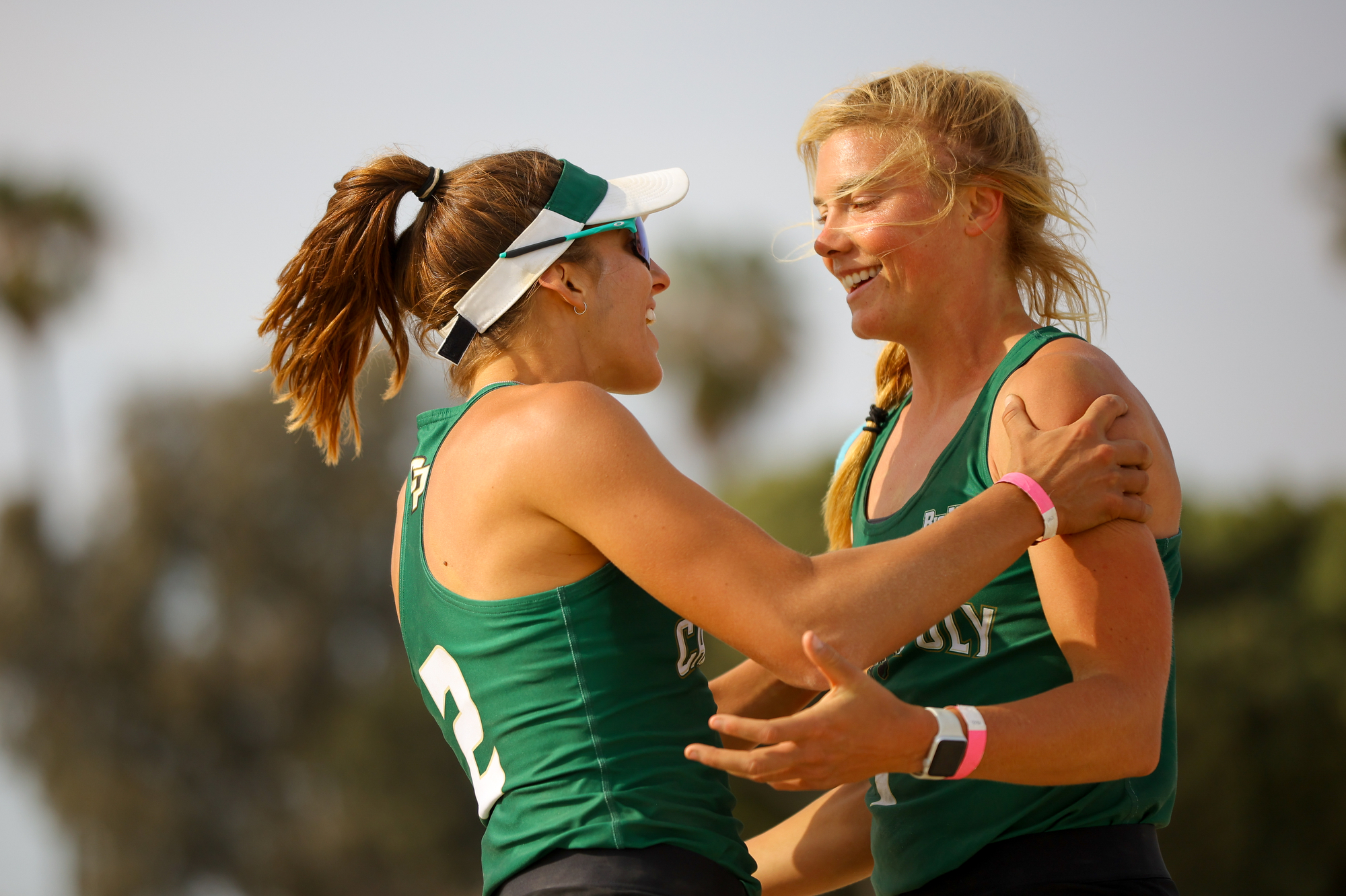 Tia Miric (2) and Mariah Whalen (1) celebrate winning their court against Hawaii. The pair was the first to win their court in the championship match, putting Cal Poly up 1-0 over Hawaii. Miric and Whalen finished the weekend undefeated, with a 5-0 record. The strong showing earned the duo an AVCA (American Volleyball Coaches Association) Pair of the Week, being the the second pair to ever win the honor in Cal Poly history. 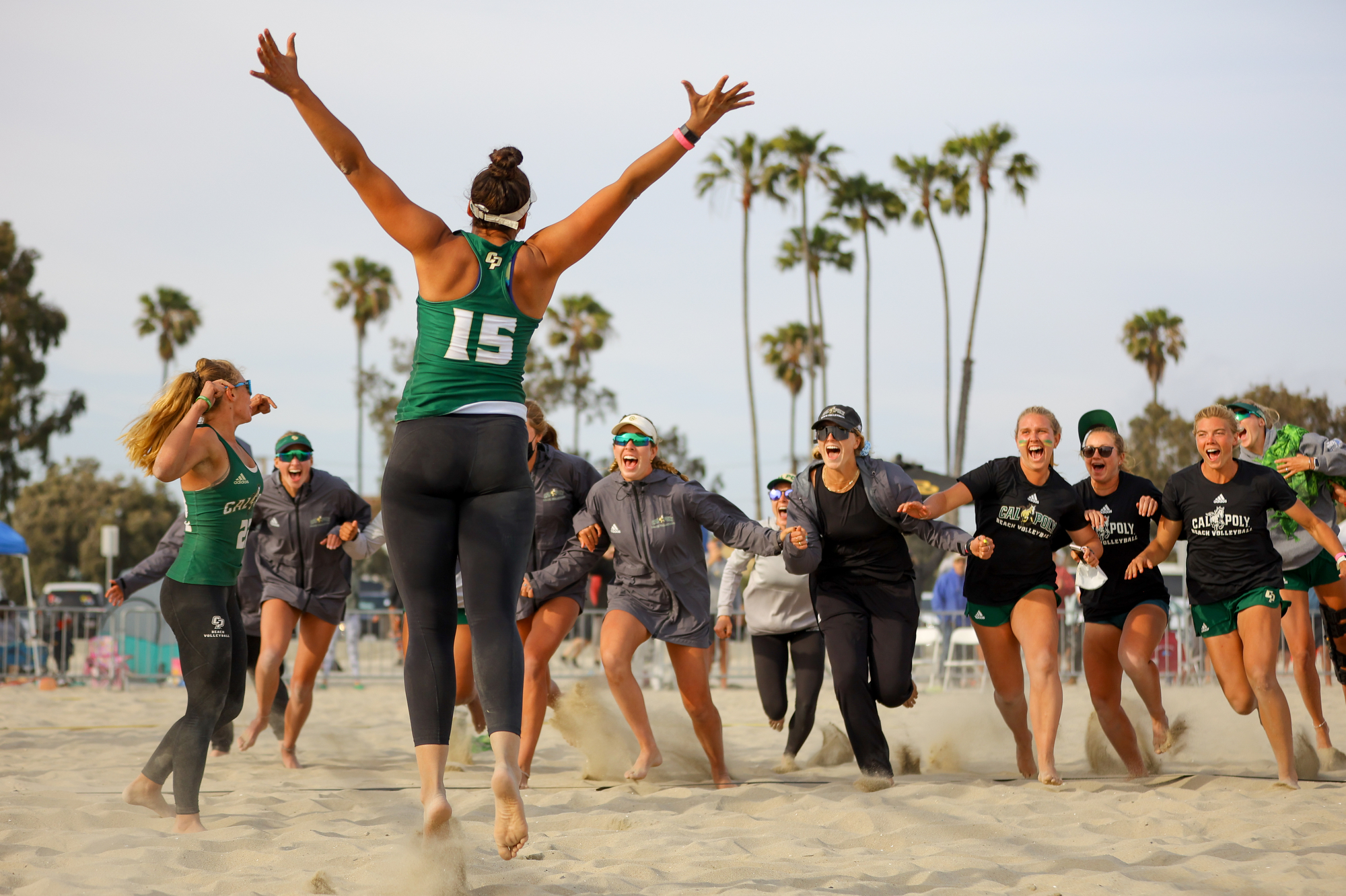 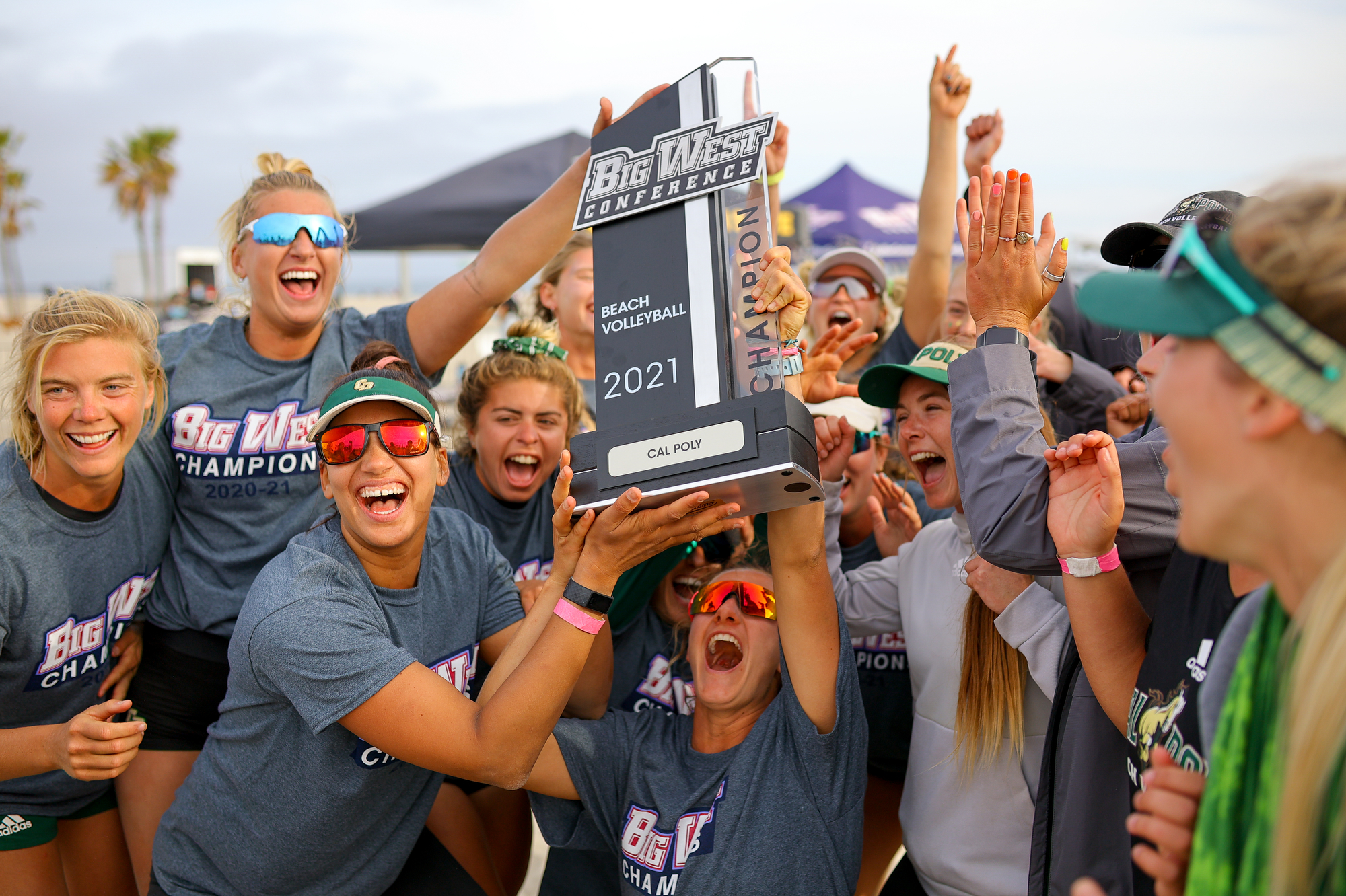 Left: Eleonore Johansen (15) jumps to celebrate with teammates after Johansen and Strah defeat their Hawaii opponents to clinch the Big West championship. Right: Cal Poly lifts the trophy in celebration of winning back to back Big West Conference titles. The Mustangs were the first team in Big West history to win the championship from the elimination bracket. 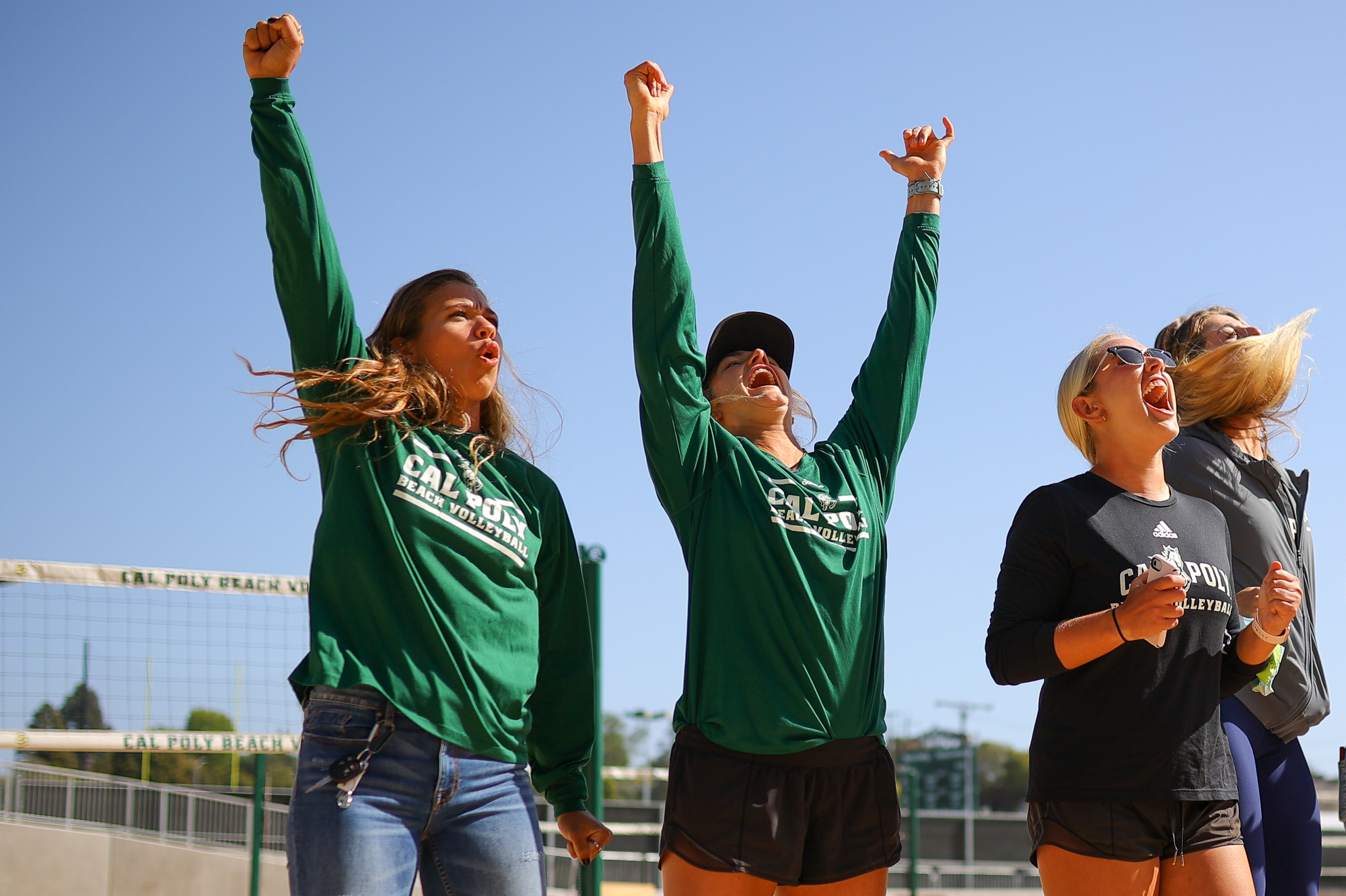 The Mustangs travelled to Gulf Shores, Alabama for the double elimination tournament from May 7 to May 9. Cal Poly entered the tournament having not recorded a win against any of the other attending schools this season. After a loss to #2 USC Friday morning, Cal Poly was pushed to the elimination bracket to face #5 Stanford. The Mustangs fought to a 3-2 victory over the Cardinal to move on in the tournament and give Cal Poly its first ever NCAA Tournament win in beach volleyball. Unfortunately, Cal Poly couldn’t hold the momentum, and fell to #1 UCLA on Saturday, eliminating the Mustangs from the tournament and marking an end to the monumental season.

Cal Poly’s efforts throughout the season did not go unrecognized. The Mustang pairs of Sonny/Gordon, Lombard/Ozee and Whalen/Miric received Big West First-Team All-Conference Honors, with Sonny and Gordon also being named the Big West Pair of the Year and AVCA First Team All-Americans. Additionally, Todd Rogers was awarded the Big West Coach of the Year.

All photos courtesy of Kyle Calzia