The road less travelled: Students opt for ‘gap year’ prior to university life

Jenna Andrews planned on taking the conventional road: going straight to college after high school.  She was all set for university life; she registered for classes and purchased the essentials to decorate her residence hall. Everything was going well — until her first week.

“I didn’t feel ready,” Andrews said.  “I felt like I really didn’t know enough about the world to settle down and walk in on something for my future, when I hadn’t even seen how other people lived.”

Andrews called her mother, who picked her up and took her home. After researching online, she discovered LeapNow, an organization dedicated to giving students an alternative experience for travel and education. Through the organization, she embarked on a four-and-a-half-month trip to Guatemala, India, Kenya and Tanzania, where she was able to grow and learn more about herself.

“It was an experience where I was changing the whole way, and just peeling back all these layers of who I thought I was,” Andrews said.

Andrews is not alone. From 2006 to 2014, the number of students in the United States who took a gap year increased by 20 percent. A gap year is defined by Webster’s Dictionary as a year spent traveling or working before continuing your studies. This time can be useful in fine-tuning social skills to prepare for college and eventually, a professional career.

“You really find your values and find what you really really care about,” Andrews said.

Breaking this news to parents can be tough, especially when it’s considered unconventional. Andrews was uneasy to tell her mother she didn’t want to stay in college.

“She didn’t ask me any questions,” Andrews said. “She came, she picked me up and even she said, like, ‘When I dropped you off, I knew you weren’t happy, but I knew I had to let you figure that out for yourself.’”

It can be difficult for young adults to figure out want to do in this transitional phase, which is why high schools are prepared to help. Kerry Ingles, a counselor at San Luis Obispo High School, said the high school is there to assist with the initial decision of whether the student wants to attend college right away or pursue the gap year.

“We definitely have students interested in taking a gap year,” Ingles said. “We have information in our career center about the possibility of a gap year, as well as information online.”

This information can be found on the San Luis Obispo High School website under Counseling/College & Career Information/Gap & Enrichment Programs.

However, high school counselors don’t always know what’s going to happen once a student takes a year off of school. Agricultural business graduate Tyler Becks chose to take a gap year after getting denied at several schools, including Stanford and Cal Poly, despite having a 4.0 GPA.  His high school counselor claimed once he made the decision to take a year off he wouldn’t be able to get into any schools because they would be able to see that he wasn’t enrolled in any college classes.

The decision ended up benefiting Becks, who was able to travel Europe during his time off and still go to Cal Poly after his travels.  He graduated in June, but the decision to take time off and travel didn’t sit well with his parents at first, who weren’t exactly enthusiastic upon hearing the news he was not going to attend community college after high school.

Becks travelled around the world — see exactly where by hovering over the hotspots below. | Graphic by Jennifer Alas 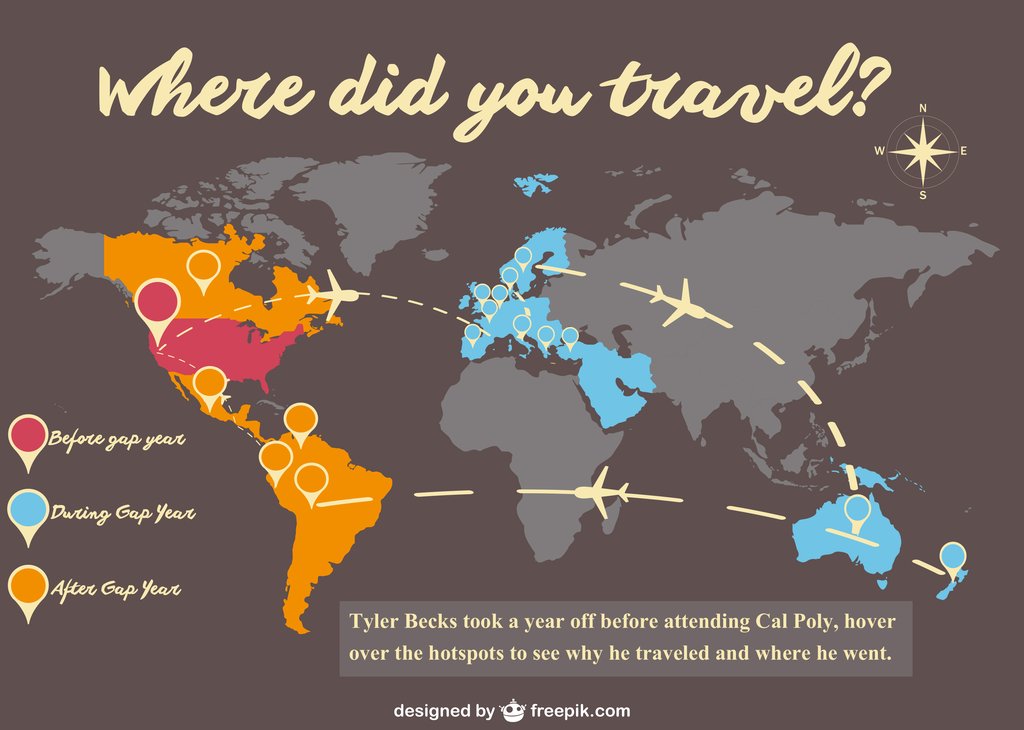 “I told my dad, and he was really just apathetic, and he was like ‘I don’t care, I’m not paying for it,’ and that’s all he said. And I told my mom and she practically walked out of the room when I told her. She didn’t want to hear anything about it.”

While more students are still going straight to college right after high school, the idea of individualism and choice are becoming more prevalent. Joy M. Pedersen, Assistant Dean of Students for Student Support, Success and Retention at Cal Poly, has worked with a number of students who took a gap year. Pedersen said there are many paths to success, and sees that culturally we are moving toward a more accepting approach to unconventional choices.

“People are getting to where they want to be in so many different ways, I think we are starting to give up this idea that there is a linear path to success,” Pedersen said.

This path is starting to become more skewed, and the more success stories that come from taking a gap year, the more we will see students taking this approach to success.

Below, see what students did during their gap years. | Compiled by Jennifer Alas
Share This
July 4, 2015
Comments (1)
The Latest