A new structure has been built in Arch Graveyard 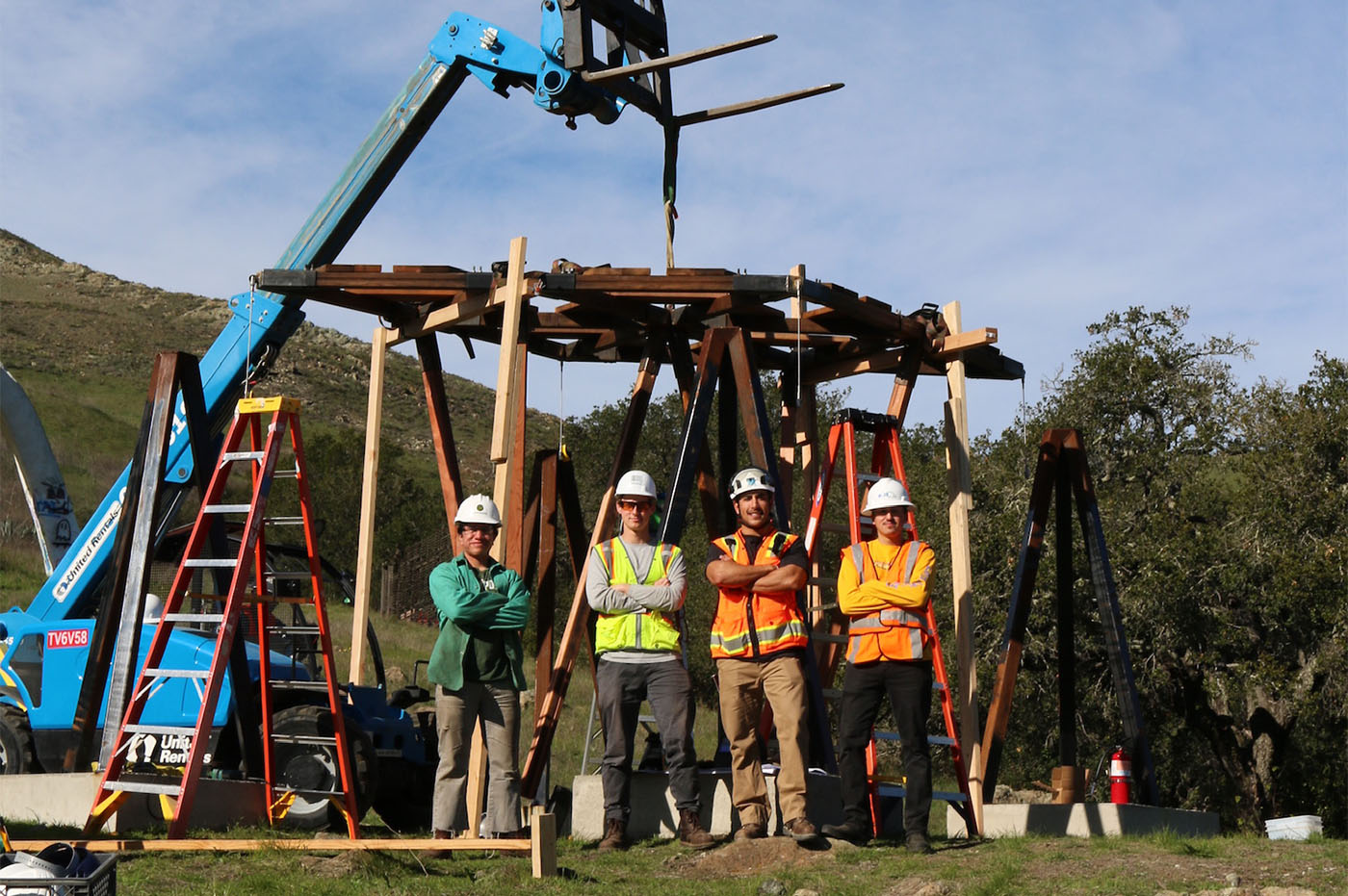 Architectural engineering graduate student Will Adam said he didn’t realize how impactful his senior project would be at first glance. However, Adam had a bold idea from the get-go: construct the first experimental structure in Poly Canyon in three years.

The team — who dubbed their project “Tensegrity” — finished their project in Poly Canyon – otherwise known as Arch Graveyard – on Jan. 23 after working on it for over a year.

The last permanent structure built in Poly Canyon was an observation deck by construction management graduates Tony Pellegrini and Harrison Woods in 2019.

The process of creating this structure was no small feat, according to the team. In late summer of 2020, then-junior Adam assembled their five man team after recognizing the talents that they would each bring. Adam met everyone through classes over Zoom, but after spending time with them working on homework assignments, he said he realized he needed to bring them on for their specific skill sets.

Tatis described Adam as “the visionary” behind the idea and the concept for the project. He was inspired to create an “impossible floating structure” that would be able to hold its own weight and have a small sitting area in the middle of the structure for visitors to marvel at the structure in awe, according to the team’s concept plan.

The pavilion structure is based on four wooden pyramid structures, each atop a concrete platform. Those structures held up a parallelogram-shaped canopy on top with two pyramid columns hanging down on either side of the canopy. All while the structure was held together with upper and lower steel gravity cables to exemplify the floating effect.

The concept of Tensegrity was pioneered by Buckminster Fuller, an architect who guest lectured at Cal Poly and developed the design for the geodesic dome at Poly Canyon in 1957. The term itself combines the words “tensional” and “integrity” and structures citing this principle use tractional cables and rigid materials such as wood and steel.

After deciding on the team, the concept and the location for the structure, it was time for the modeling process to begin.

During fall quarter of 2020, the team met up weekly to deliberate over the design, making new miniature stick models every week and deciding on what works and what needs to be changed.

The designs turned out to be very rudimentary at first but as they spent more time and effort on what they were looking for every week, they honed in on the final structure.

“We were actually pretty pumped once we drafted up the final details because that’s when we realized we could pull this thing off,” Tatis said.

The next step for the team was figuring out the calculations needed to construct the tensile structures, which, according to Adam, is extremely challenging because “a vast majority of tensile structures are actually unstable.”

In the meantime, the group also submitted their building permit forms to the university’s Facilities Management and Development unit, which was simultaneously viewed by a third-party structural engineering firm.

While the unit reviewed the concept of the project, the third-party firm is the one who issued their official building permit. The Tensegrity team went back and forth with sending over their calculations to the firm and the firm would send it back with markings on what improvements needed to be made to their plans. This portion of the project was deemed the most difficult, according to Tatis, as the project needed to fit under the firm’s specific parameters in order to be officially approved.

Throughout this stage in project development during winter quarter of 2020, the team spent a considerable amount of their time in the College of Architecture and Engineering Design (CAED) Support Shop, where they relied on the welding and construction expertise of in-shop technicians Tim Dieu, David Kempken and Vincent Pauschek. When the team wasn’t in class or doing homework, they were doing calculations and practicing welding with any technician available to them at the time.

“I hope they can receive credit for what they did because the work that these three guys do with helping students largely goes unnoticed,” Adam said. “This project literally could not be complete without them.”

There were challenges involved throughout the process of completing this project –– COVID-19 being one of the main issues.

Adam and Tatis said that while it was frustrating to coordinate meetings in the support shop given the unpredictable nature of the pandemic, fortunately the shop was relatively empty due to COVID-19, granting the team more space, equipment and attention from the in-shop technicians.

It is common – especially for work-intensive senior projects – to be finished beyond the scope of their undergraduate Cal Poly career, according to Adam. The team was actually withheld from receiving their diplomas until their senior project was finished as incentive for fulfilling the credit for the class Interdisciplinary Senior Project (ARCE 453).

Waller said the project was taxing up until graduation day.

“I was up until 2-3 in the morning the day of graduation doing permit resubmits and having those sent off and then getting up and walking across the stage,” Waller said.

Tatis stated that there were no plans of working on the project over the summer due to the team’s prior commitments and travel plans; however, the last stage of the construction was completed over the quarters of spring 2021, fall 2021 and the first three weeks of January.

During fall quarter and the first couple weeks of January, Adam and Hernandez finished the majority of the work on their own since they were both in San Luis Obispo completing their graduate degrees.

The final reunion of the Tensegrity team was the weekend of Jan. 21-23.

On Friday, Jan. 21, Adam, Cruz and Hernandez drove their rental truck all the way up to their construction site at Poly Canyon. They additionally brought up a special kind of construction tool called a Gradall forklift  to gently lift the canopy portion from the courtyard of the support shop to the site.

Once all the materials needed for that day were brought over, the team needed to flip over the canopy – which was a surprisingly easy process, according to Adam. Then, they made sure that the pyramid columns were in place with the canopy before they used the Gradall lift to hoist it into place.

Saturday, Jan. 22, was a very short day for the team. Adam made an important weld in the middle of the canopy that helped with structural support and the guys went home to prepare for the long next day.

All the team members, except Waller, as well as Dieu and Pauschek from the support shop were able to attend the Sunday of their last construction weekend. It took nearly 14 hours that day to complete the project in its entirety.

They started off by strapping together the Gradall lift with the rental truck, carrying all the remaining materials the team needed and then drove both vehicles over to the site one last time. Once they reached Poly Canyon, they added some scaffolding to brace the structure in the case of potential movement.

The team inspected what they had constructed so far and analyzed any areas of concern that didn’t match up with their intended model. Adam said that there were some components that were off by a few inches but the canopy was “exactly how they modeled it.”

Adam said that the most exciting moment was when the team slowly released the Gradall lift from supporting the structure and the structure held itself in perfect harmony.

​​”The gravity was holding it and there wasn’t any other force pushing on it,” Adam said. “It was just a really cool and kind of scary moment where it was holding still on its own like that.”

On that same day, Tatis commemorated the senior project with a slideshow on his Instagram feed, partially captioned:

“I am very excited to be able to leave such a lasting mark on Cal Poly’s campus and grateful for the many individuals and companies who donated money, equipment or their time to help make this dream become a reality.”

Both Tatis and Waller said they recognized how beneficial the skills that they learned during their senior project timeline have been, but the occupations they took on and application of these skills are widely different for both people.

Waller said that the parallels between Tensegrity and his current occupation in film are almost uncanny.

“It’s been really interesting seeing how the pre-production for a movie is very similar to the planning for a building and just in terms of the different departments you need to contract, the different people you need to hire, and all the steps,” Waller said. “And because I have that experience, I think it made me more successful.”