Blue-Green Rivalry: How did it start?

Each fall, thousands of riled-up soccer fans pack Alex G. Spanos Stadium at Cal Poly to watch what College Soccer News calls the #1 college soccer rivalry in the United States. This year, the Mustangs are looking to avenge their 1-2 loss from last year against UC Santa Barbara at Cal Poly.

“Every time we play the Gauchos it’s important, it’s a game of pride, the players are playing [for] something more than themselves,” men’s soccer head coach Steve Sampson said. “It’s a night to feel and represent what it means to be a Mustang.”

Playing for the future

The upcoming match against the Gauchos on Saturday is vital for the 2017 season, according to Sampson.

Not only does the rival match give players potential for a soccer career after Cal Poly, it is a venue for professionals to recruit future talent for the college team. This was embodied by former Cal Poly soccer player and aerospace engineering senior Trenton Matson.

“The Santa Barbara game is what convinced me to come to Cal Poly,” Matson said. “No matter how the season was going, we had to win that game. If you win that game, you’re a winning team.”

It’s evident that the rivalry is alive, especially for students in their first year at Cal Poly.

“When I first arrived I was told to dislike UC Santa Barbara and I never really thought about why the rivalry started,” materials engineering freshman Lucas Chavez said.

The long lines to buy tickets for the match show that the Cal Poly vs. UC Santa Barbara match stands out in college soccer.

“We have sold out Spanos Stadium for the past five to six years for the Santa Barbara game,” Cal Poly Ticket Office Manager Ryan Gruss said. “The maximum capacity for the stadium is 11,075.” 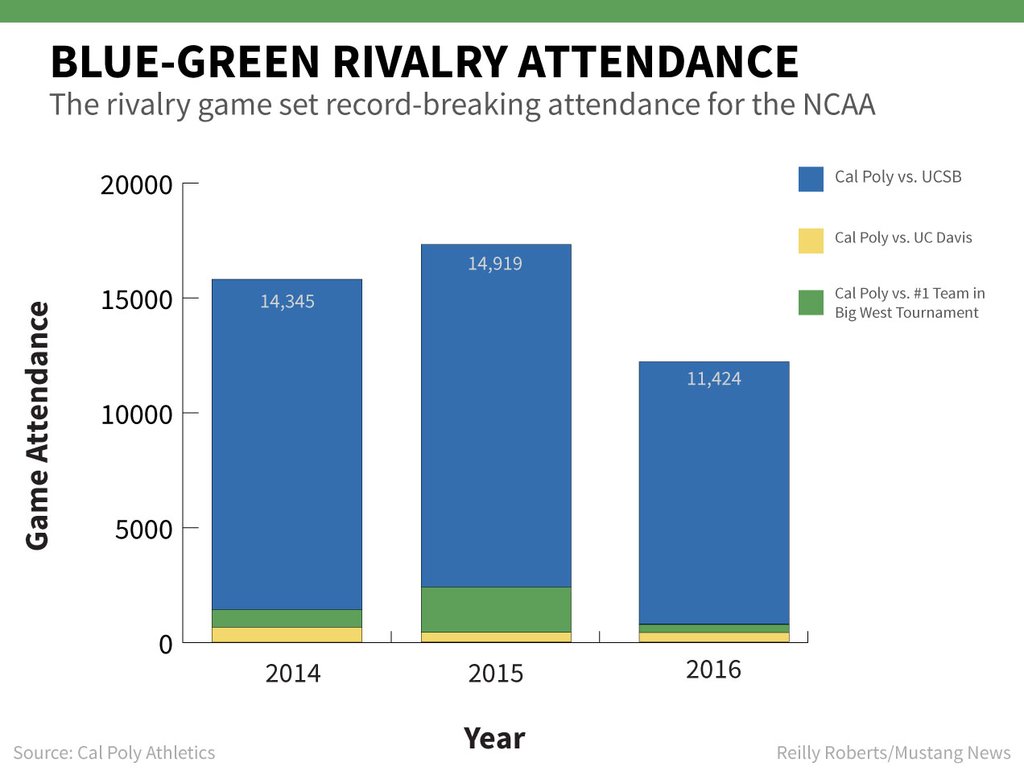 The locations of the two universities play an important part in the popularity of the ongoing rivalry.

“It definitely makes it easy to maintain the rivalry when we can easily drive to Santa Barbara within an hour or so. Plus, so many students from each school already know each other,” Matson said.

Every year the match is televised by Fox Sports Ticket 1 in Santa Barbara, bringing the match to a larger audience.

“The fact that so many people show up for that march pushes every player to be at his highest level of play, especially when it’s televised,” junior goalkeeper Simon Boehme said. “We try our best to get the result of either making our fans go wild or silencing their fans in their stadium.”

No matter how each team’s season is going, the Blue-Green is usually an even match.

“That’s the one game that is always circled on the calendar for every player, we have to win no matter what’s going on within our lives,” Boehme said. “We don’t overthink it, we just go out there and try to get it done no matter the pressure and thousands of crazy fans. ”

Sampson said this could be because of gravity of the event.

“The attention to detail [is] since almost 12,000 fans are in the stands, plus even more in Santa Barbara sometimes, it adds to the entertainment value,” Sampson said. “It’s overall a festive event that’s always celebrated to a large extent which makes the players show their best no matter how the season is going.”

The excitement that surrounds this particular match can sometimes lead fans to get a little rowdy. Matson, who now works as a staff member at soccer matches, can attest to this.

“Last year I had all sorts of things thrown at me: bottles, cans, tortillas, even a hot dog,” Matson said. “Even our coach got hit with a can. The chaos definitely can be too much for the staff to handle.”

Part of the reason for the wild enthusiasm could be channeled back to the team’s former head coach, Paul Holocher, and his unique style of play.

“Holocher wanted to create a soccer-only supporters group here in [San Luis Obispo], aside from the student population,” Assistant for Athletics Media Relations Chris Giovannetti said. “He wanted to have Poly fans sing their songs, wave their flags and put their banners up during matches.”

In 2006, Paul Holocher brought a new style of play to the soccer program that resembled European style, according to Giovannetti. He wanted to show San Luis Obispo the beauty of soccer.

“By 2007, the rivalry was thriving between the two Central Coast universities,” Giovannetti said.

That year, Cal Poly beat the Gauchos for the first time in seven years, breaking the national record for attendance at a college soccer match at 7,100 attendees.

“The rivalry has existed since the early ’90s, but truly picked up steam by 2007,” Giovannetti said.

The passion for the rivalry surged by 2008, when Alex G. Spanos Stadium sold out with 11,075 fans in attendance.

“Selling out a football stadium is such a standalone thing for college soccer,” Giovannetti said. “In recent years, soccer has become more popular in the United States, but typically it’s very difficult to sell out a stadium for college soccer, which adds to the specialty of the rivalry.”

Holocher’s European style of play clashed with UC Santa Barbara’s more physical approach to the game. This is evident in the discrepancy between the average number of fouls and yellow cards for each team and the average for the Blue-Green Rivalry match.

Cal Poly averages 10.35 fouls per match this season while opponents usually average 10.82 fouls per match against the Mustangs. Meanwhile, Cal Poly committed 17 fouls against the Gauchos and UC Santa Barbara committed 20 against Cal Poly. In addition, the teams are typically issued one to one and a half more yellow cards during the Blue-Green match than other matches.

“The game against them also felt like a competition of who has the better style of play. We’re taught to play a more possessive style of play, which is from Barcelona,” Matson said. “Santa Barbara is all about being physical.”

The differences between these two universities have played a key factor in keeping the rivalry alive.

This Saturday, Oct. 28, the rivalry continues, when the Mustangs take on the Gauchos at home after tying them 0-0 in Santa Barbara Oct. 14. More than 10,000 fans are expected to crowd Alex G. Spanos Stadium once again.