The delicate black and orange butterfly floated down from the stand of eucalyptus trees along Highway 1 in southern San Luis Obispo County, resting on Savanna Sorensen’s shoulder. Careful not to move, Savanna shared a moment with the western monarch butterfly, pointing slowly to show her children.

The Monarch Butterfly Grove in Pismo Beach is a major site for migrating monarchs to stay during winter months, according to Cal Poly biological sciences professor and monarch researcher Francis Villablanca. As one of the only public spaces along the Central Coast where visitors can see the butterflies, the Pismo grove attracts locals and tourists yearly. However, despite the large crowds flocking to see them, the western monarch butterflies’ population is declining, according to Villablanca.

Western monarch butterflies, which spend spring and summer in an area between Washington and Arizona, migrate to more than 200 sites along the California coast. The monarchs arrive between October and early March to take shelter at different locations ranging from Marin County down to Northern Baja, according to Villablanca.

“Pismo tends to be one of the groves that has the largest aggregation each winter, on average,” Villablanca said. 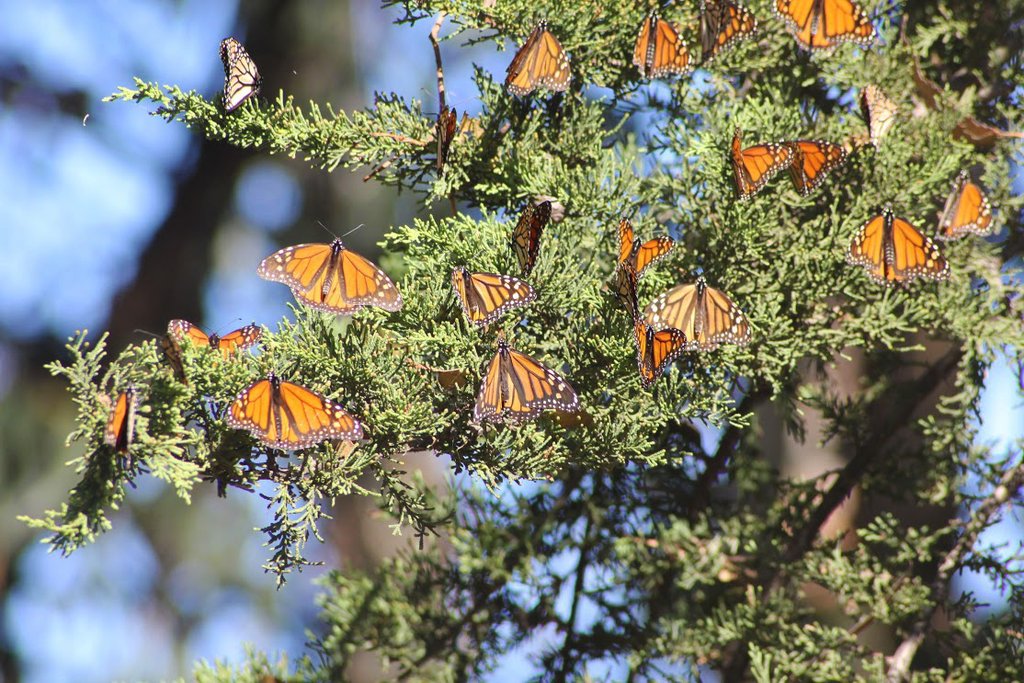 State Parks Resource Interpreter Danielle Bronson does significant research with monarchs to track the conditions that draw in monarchs. Villablanca said monarchs are cold-blooded and flee north during harsh winters. When they come to Pismo, it is not by accident.

“They migrate to the coast and they can end up on the same tree, or even the same branch, from year to year,” Villablanca said.

It’s not the audience at the Pismo grove that draws the butterflies in. Pismo is an ideal place for their new habitat. The coast of California and the mix of eucalyptus trees, cypress and pine trees make good shelter for the butterflies, according to Morro Bay Natural History Museum manager Rouvaishyana. The butterflies look for a specific microclimate, or area with a small or restricted climate, to rest in.

“They want mild temperatures, they want protection from the wind, a lot of sunlight, filtered sunlight. It depends on that to get them warm enough to be active,” Bronson said.

The monarchs can be seen floating around the grove when it is warm out, changing perches or fluttering across the grove to their food source: nectar. While caterpillars can only survive off milkweed, adult butterflies drink nectar, Villablanca said. The grove has a native plant garden that includes plants that produce nectar during winter and early spring, so that the butterflies can refuel.

According to Bronson, California’s warmer winters and marine layer protection keeps monarchs from freezing. Butterflies can be seen perched on the branches and leaves of these trees, covering whole areas, resembling the leaves of the trees themselves.

Despite the popularity of the Pismo grove for monarchs and tourists alike, monarch butterfly numbers have declined by almost 90 percent since the 1990s, according to Washington State University Vancouver professor Cheryl Schultz. According to a journal article written by Schultz, monarch butterflies are at a 65 to 85 percent risk of extinction within 50 years.

The decline in butterflies is apparent at the local grove. In the ’90s, you could expect to see almost 200,000 butterflies at the Pismo grove. Today, that number is down to 15,000 to 20,000, according to Villablanca.

Villablanca and his rotating team of four to 12 students have been doing seasonal research on the butterflies for almost eight years and have noted or seen this decline as well. One thing they are tracking is the abundance and distribution of milkweed in San Luis Obispo and Santa Barbara counties. Caterpillars only eat milkweed and due to the abundance of it on the Central Coast, the monarchs will likely stay put for the spring and summer, instead of migrating back to northern locations, according to Villablanca.

This causes issues for the monarchs, because migration is imperative to their survival. The butterflies are born with a pathogen Ophryocystis elektroscirrha (OE) that they escape through migration, according to Villablanca.

The pathogen can kill or shorten the lifespan of the monarchs and has contributed to their decline. The OE pathogen has been affecting western monarch butterflies since the 1960s and was first discovered in Florida, according to Monarch Parasites. The monarchs infected with OE are often smaller, weigh less and have shorter forewing lengths than healthy monarchs. Butterflies that are infected are weaker and cannot fly as far or as long as healthy butterflies to get water or nectar.

On the other hand, tropical milkweed, commonly found at Home Depot or Lowes, is a non-native plant on the Central Coast. Typically, tropical milkweed is easier to sell than native milkweed, because the tropical variety produces more eye-catching flowers, according to Bronson. This tropical milkweed has adverse effects on the monarch population, because it doesn’t shed its leaves at the end of each blossom season, Bronson said.

“We want our milkweed to die back which means shedding their leaves, because of the OE parasite,” Bronson said. “The spores from this parasite then sit on the leaves and the caterpillars eat them and spread and continue to spread the pathogen throughout the entire population.”

Without migration, the pathogen would continue to infect the entire population and potentially kill off or shorten the lives of the butterflies.

“I’ve been surprised many times, they’ve been bad surprises, about the condition and current projected fate of monarch butterflies,” Villablanca said. “We predict where the overwintering habitat is going to be and it’s not on the coast, that’s like really casting the future of monarch butterflies into the big unknown. It becomes an incredible puzzle of moving pieces, and people will be in charge.”

Despite the decline in the monarch population, there are still things Villablanca and Bronson say ordinary people can do to help the butterflies.

“The most important thing that we can do is to reduce the use of pesticides,” Villablanca said. “That and the regulation or reduction of carbon emissions and the slowing of climate change.

“In addition to reducing pesticide use, there’s also an effort underway to increase the milkweed abundance away from the coast, in Nevada, Central Valley, Oregon, Washington and I mean big – millions and millions of plants.”

In addition, one of Bronson’s main jobs is to improve the quality of habitat at overwintering groves. Villablanca’s and Cal Poly’s research has been exceptionally helpful in this. Villablanca has been trying to test specific clusters and areas of non clusters, to determine which microclimate they are choosing and why. That way, Bronson can design a conservation plan or restoration plan that takes the butterflies into account.

“We are looking for the specific conditions they are choosing in groves, so we can use this information to fix groves that don’t match those conditions,” Villablanca said. “For example, if they used to occur in a grove and now it’s too windy, then potentially you can manage that grove.”

In addition, community members can start to make conscious decisions with the butterflies in mind.

“From my perspective, it doesn’t matter how much milkweed we have, how many groves you have, if we don’t have the butterflies to utilize them. I walk and ride my bike in order to reduce my carbon footprint. I do the little bits that can be done by masses to make a difference,” Villablanca said.

Back at the grove, Savanna Sorenson smiled gently as the butterfly left her shoulder and floated into the sky. Her children stared in awe, as the creature they had been learning about in home school, circled the grove, before landing on its perch in the eucalyptus tree.