Ever since the killing of George Floyd in May, a summer of protests, armed responses from San Luis Obispo’s city police and District Attorney Dan Dow charging prominent activists with misdemeanors have all spurred conversations about policing and police funding in San Luis Obispo.

Since protests began in June, the city has made strides to combat racial inequality in San Luis Obispo. Last month, the city council approved a Diversity, Equity, and Inclusion Task Force. In addition, SLO City updated its Use of Force and Policy FAQs following the arrest of Tianna Arata. The city listed nine new provisions, including the banning of tear gas, rubber bullets, pepper spray or other violent tactics against peaceful protesters, as well as an establishment of a Civilian Review Board.

Breaking down the police budget 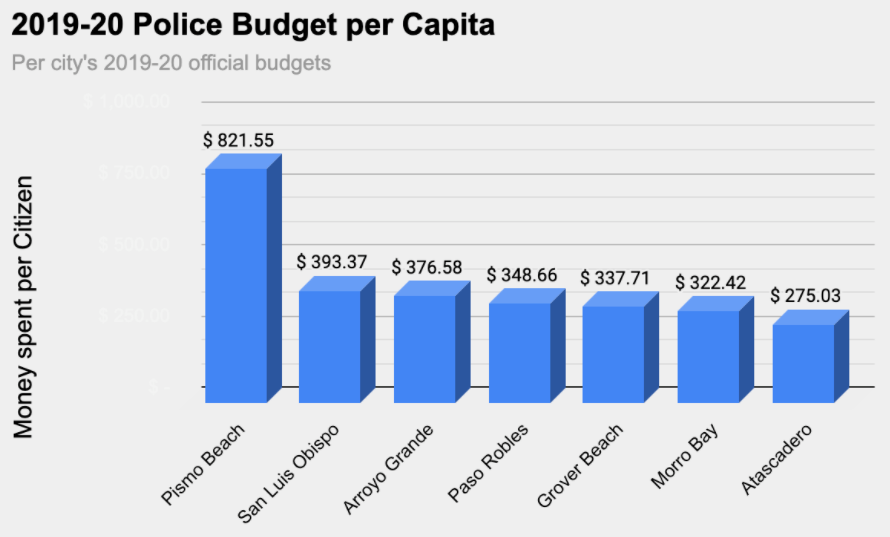 In terms of overall spending, a Mustang News review of police budgets per capita found that the City of San Luis Obispo spends roughly $393.37 per resident in San Luis Obispo, which is similar to neighboring cities. 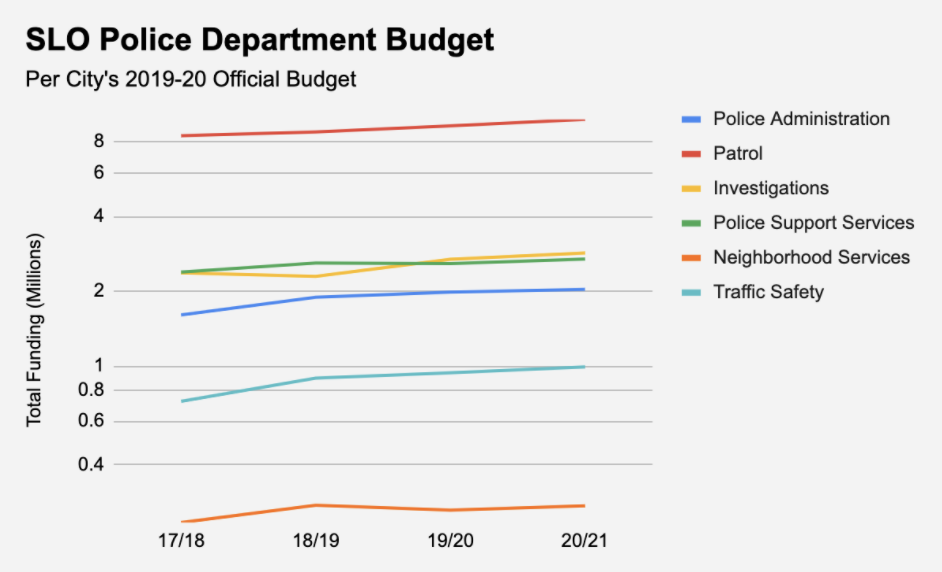 Incumbent Mayor Heidi Harmon, Sandra Marshall-Eminger, Donald Hedrick, and Cherisse Sweeney all agreed to talk with Mustang News regarding policing in San Luis Obispo. None of the candidates had set policy proposals regarding police funding or alternatives to policing. However, they said they would be open to looking into police reform if elected mayor.

Are you in favor of reducing police funding or increasing it?

Heidi Harmon: “We will definitely be having what I would hope to be a very public, engaged, robust conversation about what I’m going to call public safety as a broader category. And it’s clear that there is a lot of concern about policing, specific to this community, and of course, at a national level. And so, regardless of whether that amount is appropriate at this moment or not, we’re going to be looking at that budget and asking ourselves.”

“When I look at reallocating funding for policing. I think it’s a conversation that ends up being really positive, all the way around, including and perhaps even, especially for the officers who, the more I educate myself on this issue, the more frustrated I feel not only for people of color and black people in particular. But for the officers to honestly like it we have a system that has set up, everybody, for failure. You know, these guys and gals, these people aren’t really trained for a lot of the things that they’re dealing with.”

Cherisse Sweeney: “It’d be really reckless for me to say we need to increase or decrease it without really diving into it with the police department and dissecting what areas would be responsible to increase or decrease. That’s gonna take some really close focused meetings and sessions to talk about what their needs are and what our community needs are right now.”

“I think it’s important to make educated decisions when it comes to decreasing or increasing any funding. If it didn’t mean putting our community in danger, I think we need to do the right thing that is in the best interest of our community with keeping us safe.”

Sandra Marshall-Eminger: “They need to all be trying to trim back. We don’t need to keep charging people more taxes. We need to find out what we can do, what is in that budget that we can cut back on. Especially after what happened with the Black Lives Matters situation, I believe a wise investment would be in training our police about non-violence, and that we have ‘truly’ peace officers.”

Donald Hedrick: “They can’t enforce the laws even if we have too many laws. They need to do a better job of enforcing less laws

What are your thoughts on the Black Lives Matter protests, as well as sentiments like “Abolish the Police”?

Heidi Harmon: “San Luis Obispo is like a lunch table during grammar school that not everyone is invited to sit down at. It is. We have to have the courage to look at the mirror and reflect, and do better, and not look around the mirror and attack the mirror holders. That is what is happening now, and that is very disappointing to me.”

“I recognize that I have dropped the ball. I’ve known Tiana for four years. I met her at a Black Lives Matter action four years ago. And what has happened in San Luis between that time and now? Nothing. I am never letting nothing happen again. As long as I am in a position to do something about it, I am committed to doing something about it. If we drop this ball now, that will be the biggest moral failure since we took this land from Indigenous People in San Luis Obispo.”

Cherisse Sweeney: “I’ve been on those calls for 9-1-1’s that have happened in their life or death situations, and there isn’t anything in place yet to beat that. So until there is something, then we can start talking about it. But while there are people’s lives at stake, to make sure that we’re keeping them safe. And then we can tie when there are other systems and protocols in place that might be able to replace those, then we can talk about it. But right now, they’re not there.”

Sandra Marshall-Eminger: “My biggest concern [of the Tiana-led protest] was that someone would get hurt. I actually thought because the hospital exits are closed, if somebody’s going to the doctor or if there’s an emergency, we need to think about those things. I’ve been part of organizing protests that are non-violent protests, that we did break the law, but we understood we were going to break the law.”

Donald Hedrick: “That sounds like the socialist communists that are trying to take our country away [from us]… I’m on the side of sovereignty and sanctuary cities.”

“This is a totally sick concept of people that want to tear your governments down, tear police down and carry the world down and turn everybody into a third world country. But somehow the communist wants to turn this country into a wreck.”

What are your thoughts on reallocating money from San Luis Obispo’s Police Department Budget to other city government programs and services, including social or mental health services?

Heidi Harmon: “I hear it, and I feel it too, it feels like it makes sense to take money from policing directly and put it into social services, and maybe in the end that is the thing that makes the most sense. But maybe in the end, that’s not quite it. So that’s what I need to educate myself more about, because we also want to be careful about unintended consequences. We don’t want to defund…a department, to the extent where we have even worse outcomes for whatever reason. I don’t know that that would be an outcome but I, and one of the things his job has taught me the most is that you need to be really thoughtful about unintended consequences.”

“What’s absolutely clear to me is that we need to put more resources in helping people in a way that actually helps people and it is clear where that money comes from. I think we need to be really thoughtful and creative about coming from all kinds of different areas. We need more social workers, essentially, and less armed officers, that would be my simple kind of basic plan”

Cherisse Sweeney: “As a mayor and on city council, I’m just hoping to bridge these gaps of communication resources where there’s so many voices and people that don’t have advocates, and I’m just trying to help be an advocate for them. So whether I’m elected or not. In November, if I can at least help bridge those gaps of resources. I’ve done my job.”

“I’m going to tap into any resources [for mental health crisis] I can possibly find public, private, regional city, county, state federal. I don’t care, [I’m] going to find it. And we’re going to make sure it gets to the right people.”

Sandra Marshall-Eminger: “The way I understand defunding is that it’s not really ‘defunding’ the police, it is to be spent in other directions. One of my things again is I would be funding that people are trained better, that we need to understand this is a peace officer. Maybe it shouldn’t be called policing because that seems to be following people and finding out what’s wrong, but instead how can we make things right, happy, healthy, and hopeful for people in our community.”

Donald Hedrick: “We need the police…to enforce the laws better…[funds] should be diverted to other activities…we wouldn’t need police to do things done by other agencies that… already have something in place.”