How much has Cal Poly’s political climate changed?

Increase of  student activism on campus

College campuses were part of the political activism that surged during 2016. Cal Poly was no exception.

The university’s student activism this academic year is significant because of its impact and contrast to previous years. Political science senior Hannah Quitugua said she noticed this increase during her time at Cal Poly.

“The political climate on campus has changed so much,” Quitugua said. “When I was a freshman, I don’t think I ever saw a student protest.”

Quitugua is currently taking a course on activism and thinks the overall political climate is reminiscent of the 1960s. She said the contrast with previous years of no student activism at Cal Poly can partially be explained by the campus’ demographic.

“I think [the conservative majority] has a really big part as to why there hasn’t been as much activism before [at Cal Poly], and I feel like a lot of liberal voices kind of felt silenced by that a lot of the time,” she said.

Quitugua thinks the election served as an important lesson for activists and inspired the voices of liberal minorities at Cal Poly.

“People are kind of learning with this last election that your voice does matter a lot more than you think it does,” she said. “A lot of people didn’t expect Donald Trump to win the presidency, and then a bunch of people who normally have underrepresented voices came together and elected him.”

Business administration sophomore Micaela Lofy said her involvement in activism was a snowball effect. It started her freshman year during Week of Welcome when she was looking for feminist groups to join. Now, she is heavily involved with Triota — the feminist activism community — and QSU. According to Lofy, different activist groups on campus unofficially overlap through their goals in what is known as Student Collective. Groups involved in this collective are QSU, Triota, SQE and Black Student Union (BSU).

Similar to Quitugua, Lofy mentioned Cal Poly’s demographics as reason for the absence of student activism in the past.

“I definitely feel like the general overall political climate here is [a] little bit center right,” she said. “I would still say that this campus is really politically apathetic.”

However, she said this gave student activism at Cal Poly its own identity. 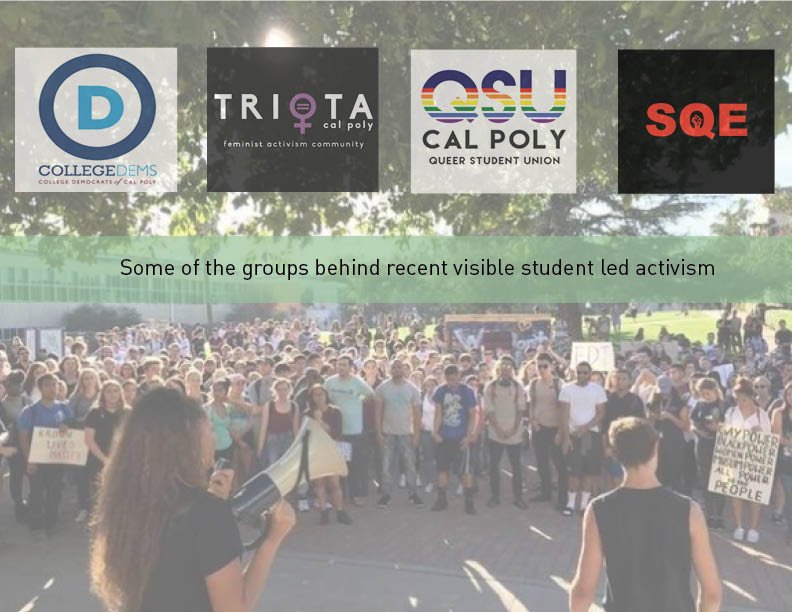 She described a growing shift away from this political apathy because of new visibility of political and cultural issues. However, Lofy also said she hasn’t encountered any protests or activism from more conservative voices or groups aside from exchanges at the Milo Yiannopoulos event in January.

“In response to the certain events that have occurred, like the election and Milo coming to campus, it brings things a little bit closer to home and people are starting to think about politics a little bit more,” she said. “The statements that the president has made about women and disabled folks and undocumented folks, it personalizes it a little bit more because it’s not just this distant, nebulous political discussion that people don’t have understanding of.”

Lofy said she hopes the rise of political activism continues at Cal Poly.

“I feel like people are more inclined to be active now than they were before,” she said.

The future of activism

This rise in activism will impact Cal Poly’s future identity, according to political science junior Matt Klepfer. Klepfer is highly involved with QSU, SQE and Triota. In an email exchange, Klepfer said he thinks Cal Poly could become the next University of California, Berkeley in terms of student activism. Berkeley is known for being highly poitical, especially after Yiannopoulos’ event on the campus was cancelled after violent protests broke out in February.

“The campus that I arrived at in Fall 2014 is significantly different than the one that [it] is today: in my opinion, a lot more students have found a voice and realized that they can make transformative change at Cal Poly and beyond,” he said in an email to Mustang News.

The future of this change may already be taking root.

Program Director for the Office of Diversity and Inclusivity Kari Mansager said freshman students are witnessing this rise of activism and seeing it as a norm on campus while upperclassmen question it.

“I just think it’s an interesting clash of this incoming class,” she said. “From now on they’re all going to be hearing this and this outgoing [class] still has feelings of, ‘Does Cal Poly really care about this?’ and the first years are hearing these stories of how it got to be and getting this message now.”

Mansager interacts with student activist groups on campus. While she has only been at Cal Poly for one year, she has felt the rise.

“Being new here and hearing that Cal Poly’s not really a protest-activist campus, I was surprised,” she said.

Mansager participated in student activism at University of California, Davis during the beginning of the Iraq War and described how the success of activism can be challenging for students specifically.

“In the short term, it can be very frustrating,” she said. “You don’t know until there’s been time to know if and how you’re having an influence.”

Her perspective on activism is that it’s good if it’s for the good of the public, which is why intersectional messages are important.

Through her experience and her time at Cal Poly, Mansager offered her advice to bystanders encountering student activism on a college campus, especially one that is witnessing an emergence of student activist groups.

“Listen with the aim of understanding,” she said. “Try to turn off that judgement that folks may have.”