Update Feb. 14: The 469 students who have tested positive for the coronavirus during the winter quarter include those living on campus as well as off-campus in the San Luis Obispo community.

Cal Poly’s COVID-19 Dashboard, which is meant to provide daily updates and figures on COVID-19 at Cal Poly, does not share that information. The positivity rate among Cal Poly’s participants in biweekly on-campus testing is also not available on the dashboard.

Total positive cases and positivity rate are two metrics commonly used by public officials to understand the transmission of COVID-19 within communities. Public health departments typically release those figures to the public in an effort to be transparent with the public.

Cal Poly’s COVID-19 Dashboard was intended to be an online resource for “daily updates on infections, testing, and quarantine and isolation cases” on campus, according to a September email from President Jeffery Armstrong.”

Five months later, the absence of key metrics including total positive cases, positivity rate and graphs presenting data over time, along with the way information is presented on the dashboard, has led to confusion about the transmission of COVID-19 within the Cal Poly community.

“It makes it very difficult to know how safe campus is,” said Sara Bridger, a Cal Poly history professor. “And that’s a matter of public health interest for the entire community.”

The implications of potentially inaccurate data concerning an issue of this gravity may undermine the level of trust between the university, the campus community and the wider San Luis Obispo community, Bridger said. 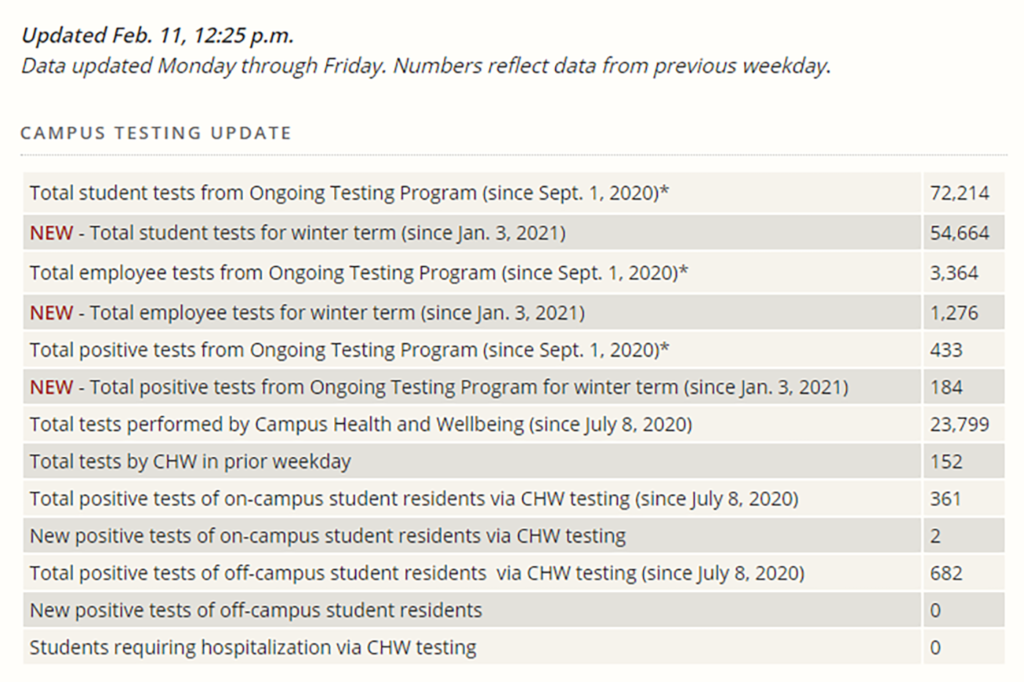 In an interview on Friday, Feb. 5, President Armstrong told Mustang News that Cal Poly’s COVID-19 Dashboard has not been perfect and that is due to the effort to transition to saliva testing on campus as well as a backlog of data from Avellino Labs, the third-party that runs the Ongoing Testing Program.

“I could not divert [Information Technology Services] personnel, you know, to make the dashboard look better at the sake of getting saliva [testing] going,” Armstrong said.

In the beginning of the winter quarter, three new categories, designated by a “NEW” label, were added in the wake of total case count and positivity rates still missing from the dashboard.

“I’m not going to put a priority on, you know, dashboard or anything else until we get the saliva [testing] going,” Armstrong said. “We are moving on the dashboard and the data, but it is a lot of backlog. There is a tremendous backlog of data.”

Armstrong said that with new saliva testing, which is expected to be fully functional by Feb. 22, Cal Poly will have a new dashboard for the public to view with more detailed day-by-day data on COVID-19 transmission.

Discrepancies on the dashboard

The university’s COVID-19 dashboard counts positive cases among the Cal Poly community in four categories. One category displays the number of positive tests detected by the Ongoing Testing Program since September 2020, the beginning of fall quarter.

But that’s not the end of it: Cal Poly has a third category on its COVID-19 dashboard to account for positive tests detected by Campus Health and Wellbeing, which is separate from the Ongoing Testing Program.

Since Cal Poly separates the number of positive cases in three categories, the one figure that tracks positive cases detected through the Ongoing Testing Program since Jan. 3 can be mistaken for the total number of students who tested positive for COVID-19 this quarter.

In an interview on Friday, Feb. 5, President Armstrong also mistook that figure, which was 158 at the time, for the total number of students who got COVID-19 so far during the winter quarter.

President Armstrong has referenced trends made available to him in emails he sends to the campus community, however, those trends have not been made public on the university’s COVID-19 dashboard.

Since Cal Poly does not present data over time on its COVID-19 dashboard, keen community members have to take screenshots of the dashboard every day in order to track spikes or drops in coronavirus cases.

Meticulously taking screenshots of the dashboard also does not necessarily mean community members are getting the whole picture. That’s due to discrepancies in data reporting that has been found on Cal Poly’s COVID-19 Dashboard.

Bridger has been keeping track of Cal Poly’s COVID-19 Dashboard and has noted discrepancies in data where figures the university reports one day on its dashboard doesn’t match up with that of previous versions of the dashboard.

“Part of the problem with our dashboard is that it’s really hard to tell what’s going on, even if you look at the previous dashboards,” Bridger said. “Right now you can’t tell from any given day’s dashboard how many new cases there were the previous day.”

…the OTP totals are not reliable. Cases have been removed from the winter quarter total but not the academic year total, w/ no explanation. The lines on this graph should be parallel, separated by exactly 132 cases. They start that way, but they’re now off by *249* cases. pic.twitter.com/11TgVtLPeZ

There has been no public explanation for any discrepancies on Cal Poly’s COVID-19 Dashboard, though Lazier told Mustang News they could be due to human error.

The data is formally collected by Campus Health and Wellbeing staff, members of Cal Poly’s Emergency Operations Center and the Department of Emergency Management, according to university spokesperson Matt Lazier.

“The process does occasionally reflect human error, though the university always works quickly to identify and address any such errors that occur,” Lazier said.

However, Bridger, who serves on the university’s academic senate, said that she along with other faculty members have made “repeated requests” to improve and clarify the data reports to no avail.

Business administration senior Morgan McIntyre works on campus at the Disability Resource Center and is regularly getting tested for COVID twice a week.

McIntyre said she thinks it’s important for Cal Poly to accurately record COVID-19 trends in order to track the progress.

“I was not aware of the discrepancies in the data,” McIntyre said. “I am surprised because the university is an institution of higher education and one would expect them to be held to high standards and ensure they are putting out correct information.”