Income diversity and costs: Updates to the Opportunity Grant and the data behind it

The percentage would be set by an advisory committee of students, faculty and staff, with appointments to the committee being made under the advice of ASI and the Academic Senate. The committee would be co-chaired by the ASI President and Cal Poly’s Vice President of Administration and Finance. Further, it would include representatives for grant receiving students and at least one out-of-state student representative, according to Armstrong.

Originally, 15 percent of the CPOF was earmarked for the Chancellor’s Office to be redistributed to other schools in the California State University (CSU) system. This has been changed so any funds transferred to the CSU system would come from the Cal Poly General Fund and non-resident tuition, rather than the fee itself. In the first two years, 0 percent of the fee revenue amount would go to the Chancellor’s Office. However, this amount would be increased to 5, 10 and ultimately 15 percent in the fee’s third, fourth and fifth years respectively.

Additionally, Armstrong said that instead of allocating a portion of the fee to fund Cal Poly’s General Fund. Rather, 15 percent of the fee under the new proposal would be allocated to hiring tenure-track faculty from underrepresented communities via the Campus Advisory Council, although this objective may be delayed initially.

Since Armstrong originally proposed the CPOG and CPOF in February 2018, attention has turned towards Cal Poly’s income diversity. The proposal could ultimately impose an additional fee of up to $8,040 on out-of-state students and would subsidize low-income, in-state students.

In early 2017, the Equality of Opportunity Project released a comprehensive study and accompanying dataset examining economic mobility and other characteristics of colleges and universities across the United States. The data not only highlighted success rates and college-level characteristics but the economic backgrounds of students across the nation.

The following is a detailed look at the data on income diversity at Cal Poly, comparing it to other higher education institutions and providing context to the issue the CPOG is intended to address. In addition, we take a look at the cost of attending Cal Poly — both for low-income students and out-of-state students — based on Department of Education (DOE) data.

The Equality of Opportunity Project’s data divides the student populations of colleges and universities into five income quintiles — 20 percent increments — and also noted the top 10 percent, 5 percent, 1 percent and 0.1 percent of incomes. When compared to other universities in California, Cal Poly has among the least income diverse and richest student bodies.

To put it in perspective, each income quintile (20 percent increment) is of equal population size nationally, but can vary depending on individual institutions’ income distributions. Based on the Equality of Opportunity Project’s data for the class of 2013, 67 percent of Cal Poly students came from households that made more than $110,200 per year while only 20 percent of students made this bracket nationally.

“Low-income and diverse students do not attend Cal Poly … This is a problem, an issue, I have been facing with for many years.”

With a median family household income of $152,900, Cal Poly students come from the wealthiest families of any public college or university in California. Only nine private universities have higher median family incomes than Cal Poly — among them, Stanford and Pepperdine. 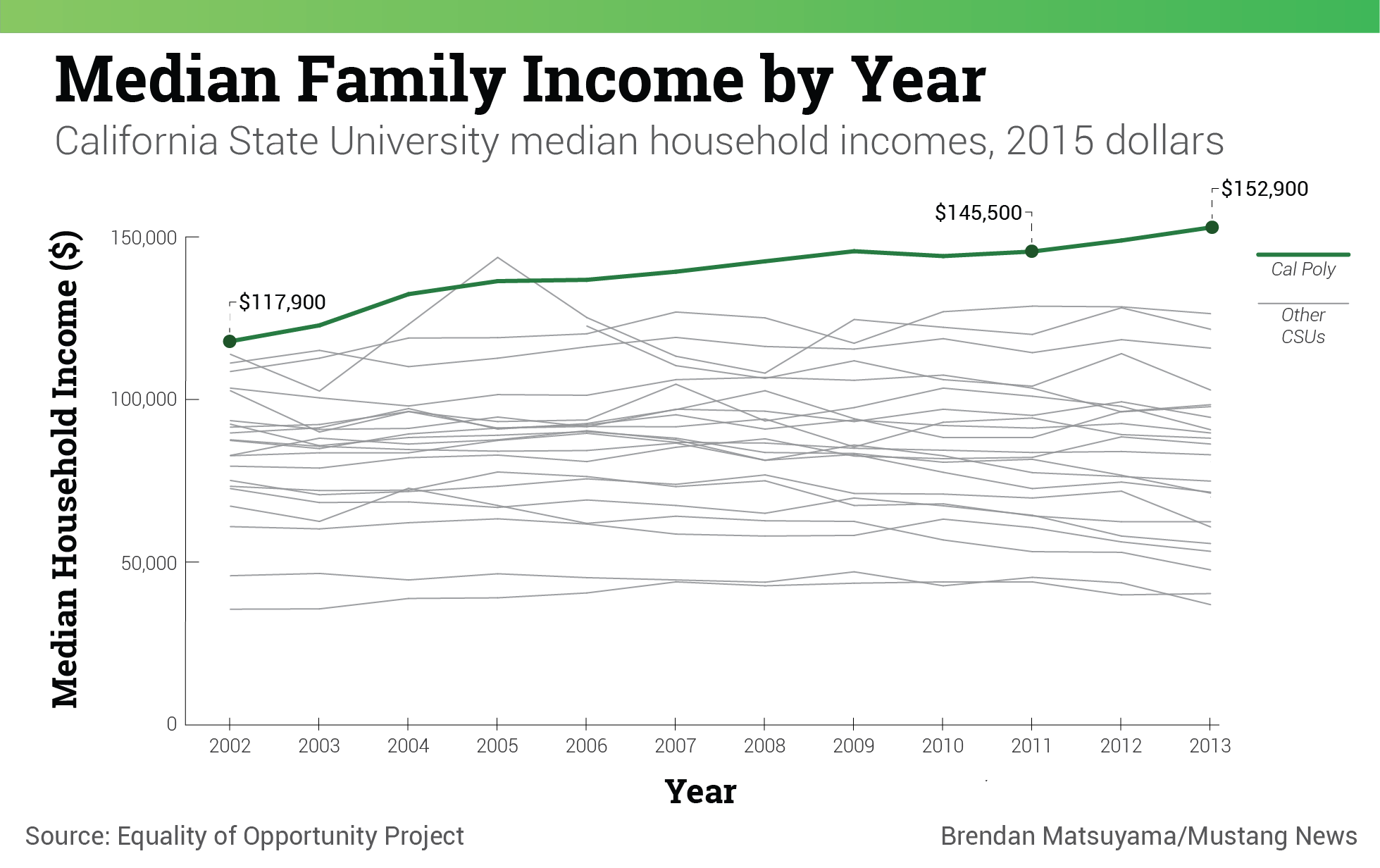 The only time Cal Poly had the second highest family incomes since the class of 2002 was the class of 2005 when the median income of CSU Maritime Academy’s 1983 birth cohort was $143,700. However, as a specialized nautical university, Cal Maritime’s cohort size was the smallest among any public university in California at the time.

Out-of-state tuition and the Opportunity Fee

Like many universities across the country, Cal Poly has experienced a significant increase in tuition, fees and other costs in recent history. Given the addition of the CPOG and CPOF, the estimated costs of two groups in particular would be impacted. 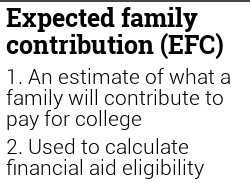 The CPOF as proposed would increase out-of-state students’ mandatory tuition and fees by more than a third. Meanwhile, the CPOG is partially meant to fund a decrease in fees for in-state students with Expected Family Contributions of $12,000 per year.

In the 2018-19 academic year, out-of-state students will pay an estimated $21,672 in tuition and fees, according to Cal Poly Financial Aid.  This figure only includes system-wide tuition and campus-based registration fees, excluding other factors included in total estimated cost, such as room and board, food and school supplies.

Out-of-state fees are extrapolated from combining full-time enrollment registration fees with non-resident tuition, which is set at $264 per unit (assuming 15 units per quarter). If an out-of-state student were to have a maximum unit load for three quarters, their tuition and fees could be as high as $26,856.

Even if assuming other fees out-of-state students are responsible for paying don’t increase — which they have for the past 10 years — as proposed, the CPOF would increase out-of-state tuition from from $21,672 to $25,692 for incoming freshmen in Fall 2019 and $29,712 in Fall 2021. This represents a 37.1 percent increase in three years. 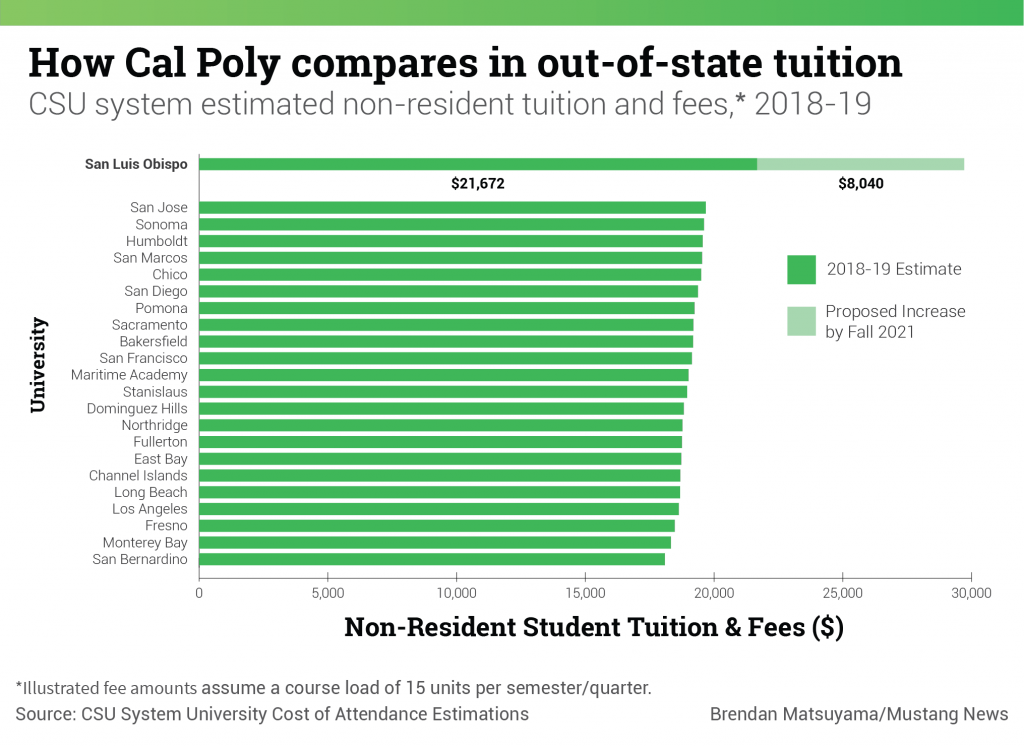 “Is it right for the majority to impose their will on the minority? It makes me feel less included at Cal Poly, seeing this fee.”

However, at CPOG and CPOF question and answer session March 1, former College of Science and Mathematics Dean and Frost Fund Director Phil Bailey made the point that Cal Poly does not compete with other CSUs. Rather, Bailey said that Cal Poly competes with University of California (UC) schools.

Despite the potentially large increases in out-of-state tuition that would result from the CPOF, Armstrong expressed confidence during an Academic Senate meeting May 29 that Cal Poly’s market is strong enough to endure such increases. This assessment was based on market research conducted by a firm that Cal Poly hired in the past to assess the potential impact of increasing tuition to support the Student Success Fee.

“We have a lot of students that we’re turning away,” Armstrong said. “The fail safe, so to speak, is the phase in. And we can monitor it every year from phasing in. The worst situation that will happen in that regard is perhaps we don’t get up to $8,000 and maybe we stop at $6,000.”

The CPOF would be cohort-based, according to Armstrong, meaning that incoming students would pay the fee amount they are charged when they first enroll at Cal Poly throughout their entire Cal Poly career. For example, if a first-time student is initially charged a fee of $2,010, the amount they pay would not increase if the next incoming class’s fee increased to $4,020. Further, the proposed increases represent maximum increases per year and could be less depending on future assessment.

Cal Poly’s adjusted net cost for low-income in-state students, the focus of the CPOG, is high in comparison to other public universities in California.

As defined by the DoED’s College Scorecard Documentation Report, its net cost figure is “derived from the full cost of attendance (including tuition and fees, books and supplies, and living expenses) minus federal, state and institutional grant/scholarship aid, for full-time, first-time undergraduate Title IV-receiving students” from families earning less than $30,000 per year in income.

Cal Poly was the third-most expensive public university in California for this category of students behind University of California, Santa Cruz and Sonoma State, which had adjusted net costs of $12,027 and $10,594 respectively.

The CPOG will seek to narrow the achievement gap between low-income students and the rest of campus and increase retention rates, according to Armstrong. However, the decision whether to implement it for the Fall 2019 incoming class has yet to be made.

English and ethnic studies professor José Navarro spoke in support of the CPOG and CPOF during an Academic Senate meeting May 29.

“We’re a publicly funded university,” Navarro said. “Our CSU system is really part of the commons here in California, and as I see it, out-of-state students and families don’t pay into our system the same way that California families do. My taxes come here to the university whether my kid comes here or not. So I think it’s a question of fairness to ask out-of-state students to pay a little more. And if they pay a little more into our system, and we can help low-income students in California, I think this is a great opportunity.”

Aidan McGloin contributed to this article.