Law enforcement have cleared the area and Santa Rosa Street has reopened to traffic.

San Luis Obispo Police Chief Deanna Cantrell said the protests were declared an “unlawful assembly” after it was determined there were public safety risks.

“The protest was mostly peaceful and lasted for 6 hrs. Protesters were asked to disperse with some taken into custody,” Cantrell wrote in a Tweet.

The protest in San Luis Obispo was declared an unlawful assembly after it was determined that there were public safety risks. The protest was mostly peaceful and lasted for 6 hrs. Protesters were asked to disperse with some taken into custody. Avoid Santa Rosa/Mill and adjacent.

Most protestors have left the area as law enforcement continues to advance.

A second round of gas was deployed as law enforcement continue to move down Santa Rosa Street.

Protestors ran down Santa Rosa toward downtown and down Peach Street.

Four protestors have been arrested by law enforcement.

More police appear to be mobilizing from the back as protestors chant “stop, don’t shoot.”

Officers said they will arrest anyone who does not start walking away from Walnut Street. It has been more than 10 minutes since law enforcement gave protestors a five-minute warning.

Police are encroaching on the crowd and cutting the intersection off.

Law enforcement has given the group a five-minute warning to disperse.

Most of the protestors have moved to the sidewalks and are kneeling with their hands up.

Protestors on the back lines are ready with a water and baking soda solution to help if anyone gets tear gassed.

As the sun starts to set, law enforcements and protestors are still in a stalemate.

The group is chanting “Black lives matter” as protestors remain at the intersection of Santa Rosa and Walnut. More law enforcement officers have arrived — bringing the total to approximately 100 from multiple agencies.

Multiple protestors said officials have asked organizers to have the group disperse.

A protestor announced to the crowd that law enforcement have “orders to do whatever they want to us.”

Many of the protestors are college-aged.

Many of the protestors have dispersed, but there is still a group of approximately 200 being blocked by law enforcement.

There is currently not a curfew imposed in the City of San Luis Obispo.

Protestors said they are not planning to move past the officers over a megaphone.

Protestors have stopped at Walnut Street and Santa Rosa Street as law enforcement prevent the group from continuing down Santa Rosa.

Many officers are in riot gear with gas masks on. They have formed a blockade near the San Luis Obispo Police station.

Protestors are shouting, “I don’t see no riot here, why are you in riot gear?”

At a San Luis Obispo County COVID-19 response press briefing, Sheriff Ian Parkinson said he was “shocked, saddened and angered” over what he saw in the video of George Floyd being held down.

Parkinson said local gatherings have been peaceful and organizers have been cooperative with law enforcement.

“I expect further gatherings and protests and marches to remain peaceful, because the people attending them are our friends, our neighbors, and our family members,” Parkinson said.

County Health Officer Penny Borenstein reminded protestors to keep six feet of physical distance from each other to protect against the spread of COVID-19.

Approximately 400 demonstrators are walking down Higuera. Multiple law enforcement agencies are in the area, but not attempting to stop the protestors.

It has been nearly four hours since the first protestors were spotted.

After marching south on Highway 101, protesters exit the freeway at Marsh Street.

The group is stopped at the Marsh St. Exit near the parking lot of Cerro San Luis after being met by officers in riot gear.

Protestors have entered U.S. Route 101. Traffic is stopped in both directions. 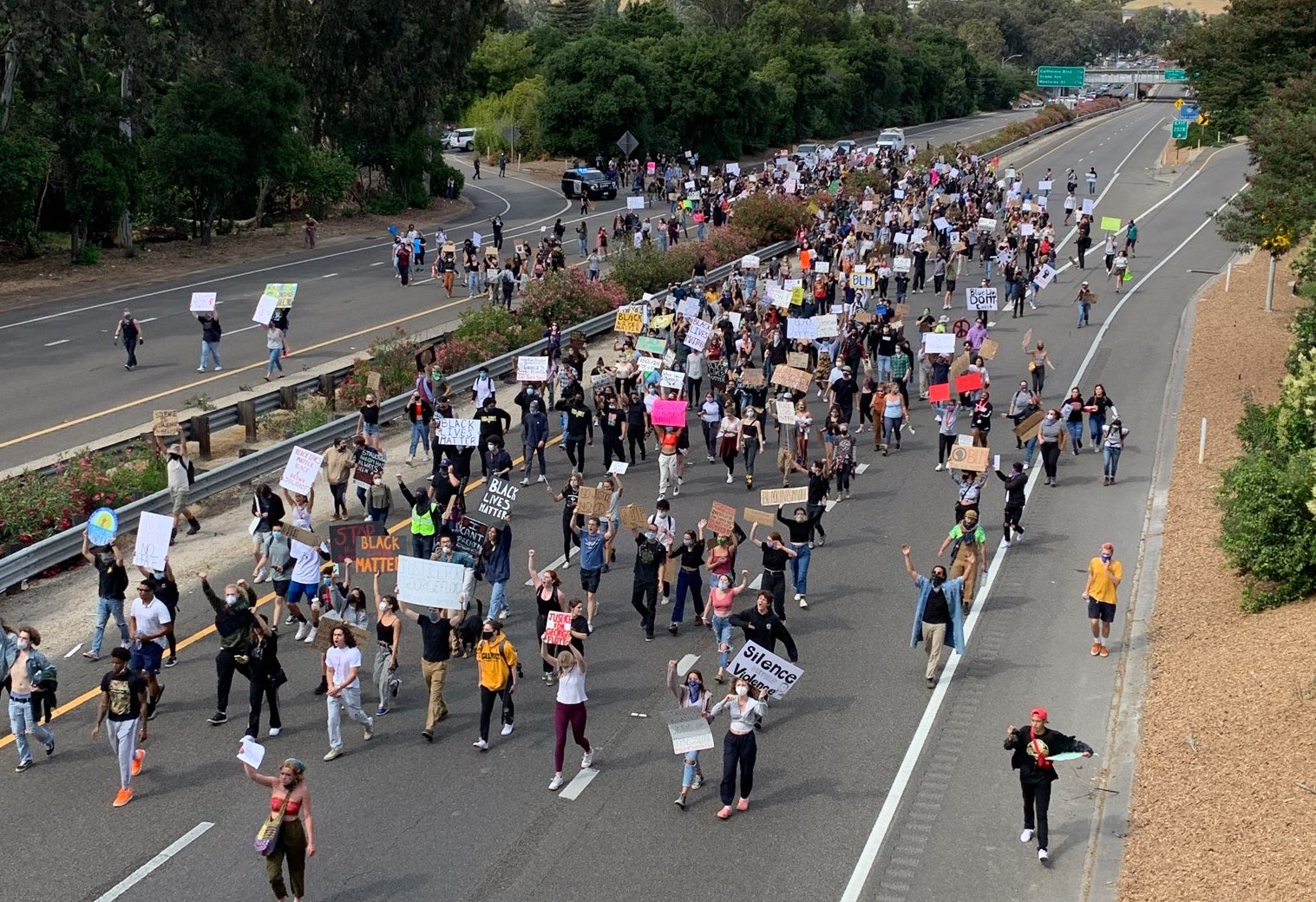 Demonstrators keel at the intersection of Morro Street and Marsh Street for an 8 minute 46 second moment of science — the length of time George Floyd was held under a Minnesota police officer’s knee.

“It was the longest eight minutes of my life. I want them to stop killing [people of color]. Immediately,” Emily Armstrong said.

This is the second day in a row protestors have taken to the streets in response to the death of George Floyd.

Editor’s Note: A quote was updated to use the term “people of color.”