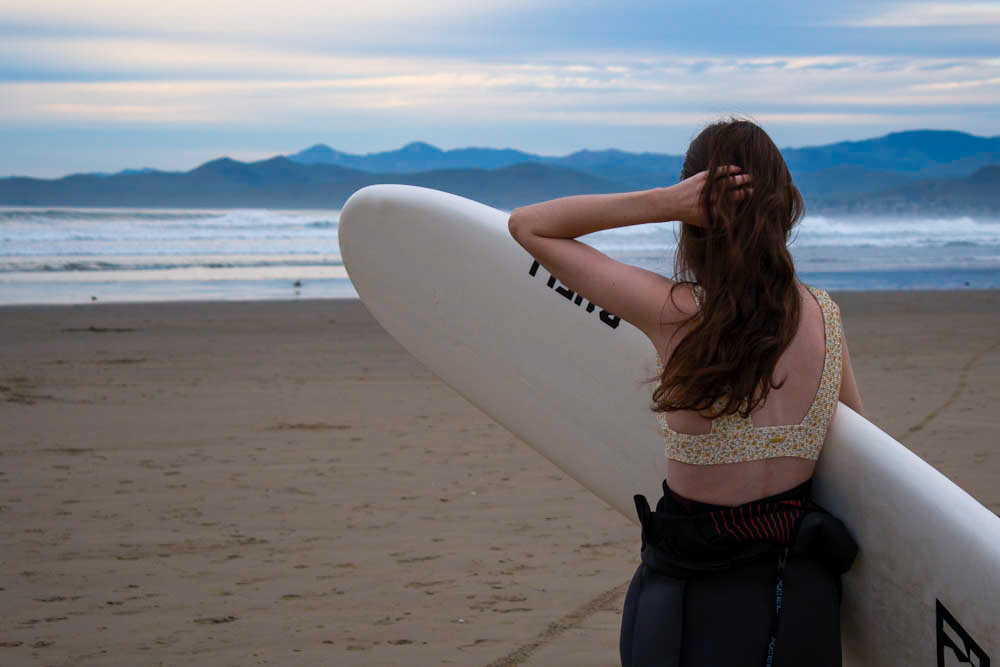 “My mental state goes way downhill if I don’t surf,” Paneno says. “You get thrown in the flow state in the water, you don’t have to think — just be aware of what’s around you and that puts you in the present moment.”

However, the local community received a shock in December when a man was killed in the first fatal US shark attack of 2021. Now Cal Poly students and surfers are reflecting on what the attack means for them.

“It hasn’t changed anything for me,” Paneno said. “When I saw it I knew my mom would freak out, but I wasn’t too stressed.”

Adema said that after the incident, he got stripes for the bottom of his board to deter the sharks. Research shows that the stripes stand out and look like the skin of certain snakes and fish that sharks normally try to avoid.

He said he is more worried about crashing into other surfers when he goes out than ocean predators.

“Longboard fins are like giant knives and have cut me up,” Adema said. “With the coast being such a popular spot, most days you are sharing the water pretty close to other people.”

Business administration senior Sidney Humble said the fatality has not affected her relationship towards the ocean.

“In a weird way, I like the thrill of not knowing what’s underneath me,” Humble said. “Sometimes my leash will touch me in the water and I have to check what it was.”

Humble said she does not go to secret spots without crowds and feels more safe in numbers.

However, according to Humble, something that troubles her the most about the local surf scene is not the risk of a shark attack, but the intimidating lack of female surfers.

“Honestly I think about that more than sharks when I’m out there — and it’s one thing that deters me,” Humble said. “I’m always scared I’ll get in someone else’s way.”

Construction management junior Jaden Green said the only time he feels uneasy is when he is surfing by himself in the spot the fatality happened. If other people are around, he feels fine.

Green says surfing always pulls him back because “it’s not like setting your phone down or getting out of your house; it’s like being in the middle of nowhere.”