OCD: More than being a perfectionist

“I need to wash my hands every time someone touches them.”

“I can’t stop doing homework. Even when it’s perfect.”

“I have to check all the locks and stoves before I leave. Repeatedly.”

“My thoughts consume me.”

These are the things that people with obsessive-compulsive disorder (OCD) may face every day.

Obsessive-compulsive disorder is distinguished by irrational thoughts or fears that further lead to tedious and repetitive behaviors. According to an Anxiety and Depression Association of America 2014 study, 2.2 million Americans are diagnosed with OCD — including some students on Cal Poly’s campus.

First acknowledged in the 1600s, and once labeled simply “religious melancholy,” OCD evolved as a concept based on Sigmund Freud’s ideas of mental structure, mental energies and defense mechanisms, according to Stanford Medicine.

As time went on, advances in medicine have allowed scientists and psychologists to understand the biology of the disorder.

Eric Goodman, a licensed psychologist and lecturer at Cal Poly in the psychology graduate program, specializes in treating OCD. Goodman has helped more than 100 Cal Poly students diagnosed with OCD.

Those diagnosed with OCD overreact to scary and unpleasant thoughts in their heads, and in an attempt to get rid of these thoughts, create ritualistic behaviors, Goodman said. 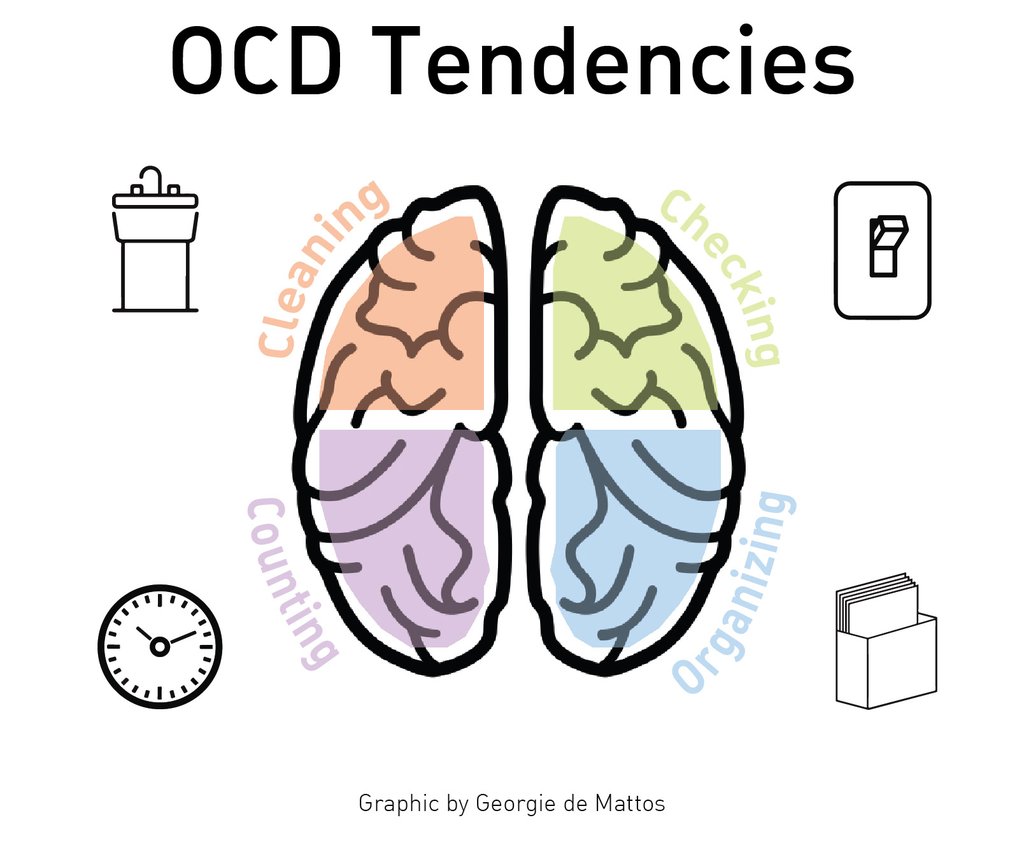 Those suffering from OCD often know their thoughts are completely irrational, but are incapable of stopping them. The compulsions they experience can range from aggressive compulsions to contamination obsessions to religious obsessions to repeating rituals, like rewriting over and over again. It varies from person to person, depending specifically on their case.

At that age, Mazer would have to hear her parents say goodnight to her every night before bed. It was more than habit. It was more serious than that.

“If my parents didn’t say that they loved me back, every night before I went to sleep, if it wasn’t the last thing I heard, I thought they were going to die,” Mazer said.

Mazer sought out professional help early on and now knows how to minimize her compulsions in her everyday life.

While there is no clear cause for the disorder, according to Dominguez, it is sometimes a result of nature versus nurture — environmental surroundings versus genetic composition.

“Though a person could be predisposed to the condition, it is the epigenetics, or the environment, that can really shape a diagnosis. It can all be intertwined, which is why it is difficult to pinpoint the exact cause of the disorder,” Dominguez said. “Everyone has a variety of different backgrounds and genetic makeups, which may correlate to increased risk for OCD, but which do not define a singular cause for OCD.”

Psychologists have developed a variety of different treatments that can help relieve obsessive-compulsive tendencies.

Cognitive behavior therapy can consist of cognitive therapy or exposure therapy; perhaps even both, Westfall said.

Cognitive therapy is when a counselor or therapist tries to talk through the obsessions and compulsions with the patient.

Exposure therapy is another type of therapy that falls under cognitive behavior therapy. In exposure therapy, the patient is not allowed to act upon their compulsions. For example, a patient who washes their hands repeatedly throughout the day would not be allowed to wash their hands in this sort of therapy.

Pharmacotherapy is when the patient is prescribed medication that fits their individual needs.

One common misconception of OCD compulsions is they are the same as perfectionistic tendencies.

People with OCD cannot control the actions that cause them distress. The actions are unwanted behaviors that cause them to act a certain way. It becomes a disorder when the compulsions start to interfere with their social, school and work life, according to Westfall.

Distinguishing the difference between OCD and perfectionistic tendencies is important in understanding the disorder, as well as respecting those who have it, Dominguez said

“You hear the stereotypical term ‘Oh she’s so OCD,’ or ‘That was such an OCD moment,’ and when you step back and realize, that’s actually a disorder, that’s a diagnosis. Someone actually identifies as that way,” Dominguez said. “I know when I step back and think about that, I need to not say that because I’m having a perfectionistic tendency, but I’m not OCD. It’s very different.”

The Cal Poly Health and Wellness Center has counseling services that can help and further lead patients to ongoing care in the community, as well as the Disability Resource Center and PULSE. Academic centers, including within department tutors, offer resources for those with mental impairments as well.