Former football recruit finds passion in the face of adversity

In June 2016, Javier finished his high school football career and was slated to be a preferred walk-on for Cal Poly’s football team. Little did he know he would never play another game of football.

Javier’s father played football at Saint Mary’s College, and Javier himself started playing when he was 7 years old. He fell in love with the game.

“I played all through youth football and high school, and it kind of was always my goal to play college football,” Javier said.

However, the day before graduating high school, Javier broke his neck diving into his friend’s pool. He was paralyzed from the chest down and told he would never walk again.

“Throughout the day I’d been diving in. Just hanging out. I guess the last time I jumped in, it was one too many,” Javier said.

After his injury, Javier spent the next few weeks in the intensive care unit and almost a year rehabilitating in different hospitals.

While much has changed in Javier’s life, one thing has not. He is attending Cal Poly just as he was hoping to last year. However, he is taking a different academic route than initially intended.

Originally admitted as a mechanical engineering student for the 2016-17 academic year, he is now a biomedical engineering freshman — something that his injury inspired him to study.

“I ended up re-applying under biomedical engineering, something that I think I’d be more into … a lot more passionate about,” Javier said.

Javier always excelled in math and science, but his experience with medical equipment and practices while recovering from his injury gave him unique insight into biomedical engineering.

“When I had this injury, I did some research and looked into kind of combining [math and science] with all the new medical knowledge I had. And I found that with biomedical engineering I could do a lot with it,” Javier said.

One aspect of biomedical engineering that particularly interested Javier was the potential of stem cell research to help people in situations similar to his own. Javier himself had an injection of 10 million embryonic stem cells in hopes that he would be able to have full use of his hands again. He was the fifth person in medical history to receive the treatment.

According to biomedical engineering professor Trevor Cardinal, embryonic stem cells are useful, especially for repairing parts of a body.

“Those cells have the capacity to make any other cell in our body,” Cardinal said.

However, more than a year since the injection, it has done little, if anything, to restore full use of Javier’s hands.

“There’s obviously natural recovery that happens over time,” Javier said. “So it’s hard to tell what recovery’s from the stem cells and what’s just natural recovery. For me, I don’t think I had a big enough return to where I could say it was anything from stem cells. It was nothing that really stood out to me.”

Doctors told Javier that the injection could take up to two years to fully work. While it may never work and he may never have full use of his hands again, he is still interested in the use of stem cells.

“It’s something that really interests me … I see that it does a lot, not just with spinal cord (patients), but with other patients I’ve seen. They do a lot of trials with cancer patients and autoimmune diseases,” Javier said. “I have a close connection with it.”

Cardinal, also the director of Cal Poly’s regenerative medicine program, has the same hope for stem cells as Javier, although it will take some time for stem cells to be used routinely.

Biological sciences sophomore Sia Park volunteered to help Javier with his daily life. She says she is happy to work with him.

Javier’s injury does not significantly hinder his life at Cal Poly. Park helps him with tasks like picking out his clothes and making his breakfast. Through her work with Javier, she believes she will gain experience that will allow her to help others.

“I’m trying to go into the medical field, so I think this is a good insight into what I might be doing,” Park said.

Javier takes longer to get ready in the morning than other students. Even so, he still makes it to his classes that usually start at 11 a.m. Cal Poly’s Disability Resource Center (DRC) transit takes him from his Cerro Vista Apartment to the main campus, where he uses his wheelchair.

“The DRC has been really great and accommodating,” Javier said.

After class, he likes to get lunch with friends and go to the Recreation Center to work on upper body strength. He then studies at the library or his apartment and ends the day by hanging out with his roommates.

One thing that separates Javier from other freshmen is that he was allowed to bring a car to school.

“Compared to other freshmen, I think I have more access off campus with having a car,” he said. “I can park pretty much anywhere on campus because I have all the handicap spots.” 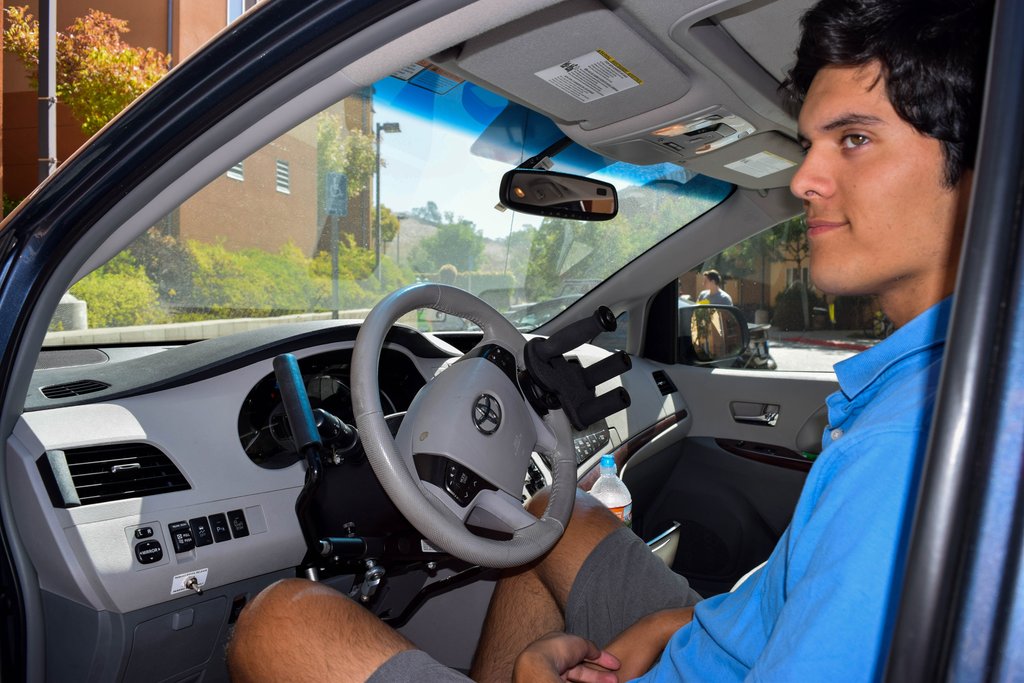 His car is a blue van that has been modified so it can be driven even with the limited use of his hands.

Javier’s dream of playing college football will never come true. However, he does not view his injury with anger or resentment.

Much like a problem he might face in an engineering class, this is another problem to solve.

“[I’ve been] pretty good at finding challenges and ways around them,” Javier said. “If you say I can’t do things this one way, I’ll find a way to do another.”