Throughout his presidential campaign, Biden spoke about his goal to forgive $10,000 of student debt for all federal loan borrowers. His plan would effectively set 15 million people’s student debt to zero.

Latner, along with several policy experts at Cal Poly, does not think that this plan is the best idea for a long-term solution.

For now, this plan to cancel $10,000 worth of student debt in federal loans is on hold. Instead, on Jan. 20, Biden requested that the Acting Secretary of Education extend the suspension of student loan payments while keeping the interest rate at 0% due to the financial struggles caused by the pandemic.

Biden’s original promise was to forgive student loans for those who had an annual income less than $125,000, attended a public university or used loans for undergraduate education.

That has not happened. Instead, it updates the already established Public Service Loan Forgiveness (PSLF) Program and loans forgiven through an income-driven repayment plan (IDR).

According to a person’s income, the repayment plan promises to eliminate any remaining debt after 20 to 25 years of steady payments. Since it began in 1995, the total number of people who have had their loans forgiven through this program is 32.

This bill provides the largest federal allocation of funds to date. The American Council of Education estimates that it would take $97 billion to help students and institutions recover from their losses due to the pandemic.

“This change clears the way for President Biden to use his authority to cancel $50,000 in student debt to provide a massive stimulus to our economy, help narrow the racial wealth gap, and lift this impossible burden off of tens of millions of families,” Sen. Elizabeth Warren (D-Mass.) said in a statement after the Senate passed the stimulus package Saturday.

The COVID-19 relief bill included a stipulation that forgiven student debt is tax-free until 2025. President Biden did not cancel student debt, but this provision could help around 45 million borrowers in the U.S.

Forgiven student debt is not the same as canceled or discharged student debt even though they are similar. Student debt can be forgiven if the borrower is working in the public sector and falls under the PSLF Program.

Discharged student debt occurs when someone is no longer required to make payments due to circumstances like a permanent disability or the university’s closure where the borrower received their loans.

Student loan forgiveness can often leave the borrower with an enormous tax liability because any forgiven debt is added to the borrower’s income on their annual income tax, which, in turn, raises the amount of taxes owed. This tax-free student loan system could provide significant benefits to student loan borrowers on an income-driven repayment plan.

“The blanket solution of student loan forgiveness is controversial because the majority of those loan forgiveness’ would go to those that make six figures such as doctors and lawyers or other professionals,” Political Science Professor Shelley Hurt said.

Student debt in the U.S. is currently at $1.68 trillion and grows more than six times faster than the nation’s economy.

The biggest issue with Biden’s plan to cancel student loans is that it is a temporary measure that would not replace the tuition-based model of higher education.

“This points to a larger problem that’s not being addressed, the affordability of higher education,” Executive Director of Financial Aid and Scholarship Office at Cal Poly, Gerrie Hatten, said.

The average annual cost of full-time in-state student enrollment is $20,592 at Cal Poly. The average total student debt after graduation is $19,075. 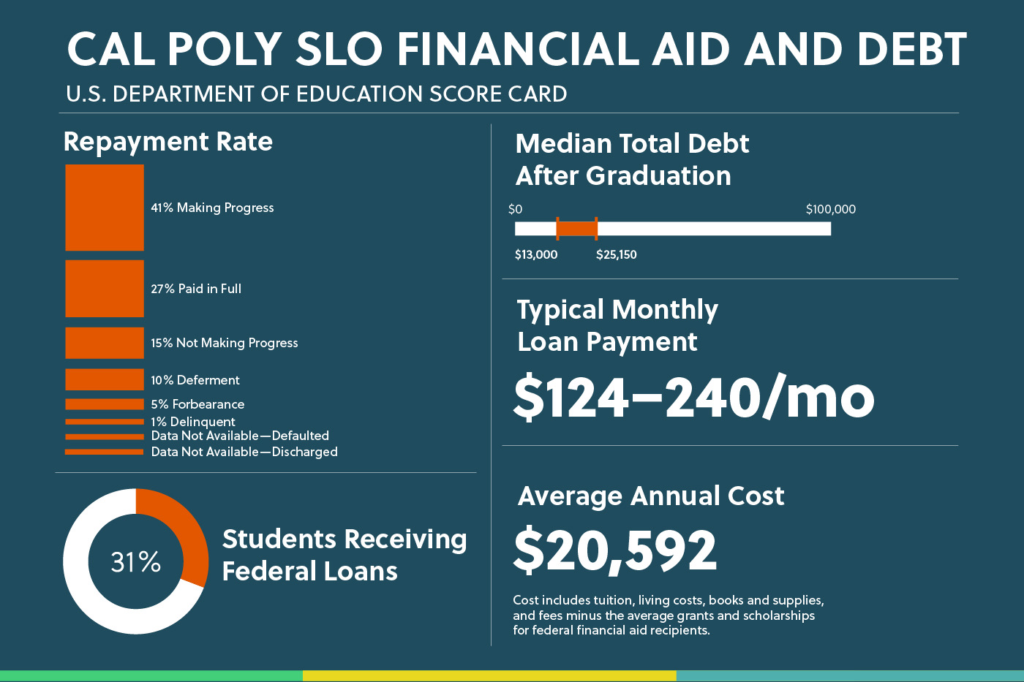 Both Professor Latner and Hurt disclosed that they still have student debt from when they were in college.

“I still have student loans, so I’m sympathetic to the whole thing, and I am a big believer that the burden of student loans is postponing marriage and preventing young people from buying homes,” Hurt said. “It has this really negative effect.”

Cal Poly is among the top CSUs but is also one of the most expensive. When compared with San Diego State University, it costs around $5,000 more in annual tuition and fees.

At its founding, the CSU system was intended to be virtually free for California residents, with the only fees being “incidental costs,” according to Governor Pat Brown’s Master Plan for Higher Education (1960). The California Master Plan for Higher Education created the three different types of public institutions: community colleges, CSUs and UCs.

“There has been wage stagnation since the early 1970s, yet now there is an expectation that California families are supposed to pay six figures for their kids to go to a public school that was supposed to be free in the first place according to the master plan,” Hurt said.

There has also been a large divestment in state funding to institutions for higher education throughout the decades, according to Hurt.

The state higher education system grew too quickly throughout the ’60s and started to provide a smaller percentage of funding towards CSUs. It did not adapt throughout the years as the state experienced a fiscal crisis and changing students’ demands.

The divestment trend in higher education has continued for decades, and tuition has doubled since the ’80s.

Viewing student debt from a historical perspective prompts the question, “how could they [the U.S. government] design policies or incentives of freezing or decreasing the prices of college going forward,” Hurt said.

Biden’s original campaign promise does not resolve the high price of tuition, according to Hatten. It would only serve as a temporary fix.

“What’s the follow-up because if you just cancel student debt, then you keep the system the same, then you’ll just recreate the problem,” Latner said.

This pause of student debt payments is a stop-gap solution and a small first step, but the conversation surrounding national student debt is ongoing. If enacted, student debt’s widespread cancelation will eliminate 80% of federal loan borrowers’ debt, signifying a major change in the U.S. college educational system.