There was very little movement aside from a slight breeze coming off the ocean as the boat approached the dock. The only sounds were of the seagulls and the waves hitting the dock until the SLO Voyagers arrived. The air instantly filled with laughter and excitement as Cal Poly’s first dragon boat racing club prepared for practice.

“There were a whole bunch of paddlers here who wanted to keep paddling, but there was no type of paddling club at Cal Poly. So I decided, ‘Why don’t I try to start it?’” Chen said.

SLO Voyagers started rowing together during Fall 2017 and have since practiced every Saturday morning in Morro Bay. Chen described the sport as very team-oriented.

Dragon boat racing originated in Southern China and is the fastest growing international team water sport today, according to the California Dragon Boat Association. A dragon boat is typically decorated as a dragon with scales along its side and a dragon head at the front. The boat is approximately 40 feet long and is filled with about 22 racers.

Before dragon boating became a competition, it was a tradition in Asia used to worship the dragon to encourage rain. The famous Chinese poet Qu Yuan was said to have started the tradition after he tried to commit suicide and a local fisherman paddled out to save him. They beat drums and pounded their paddles on the river to try to scare away anything that would try to eat his body, according to the California Dragon Boat Association.

SLO Voyagers is made up of both students who have been racing for years as well as rookie paddlers. Physics sophomore Daniel Simons founded SLO Voyagers during Fall 2017 and joined having no prior knowledge of dragon boat racing.

“The first practice was definitely the hardest one and I was sore for the rest of the week, but it was a good time coming out here and meeting everyone,” Simons said.

Sociology freshman Hieu Nguyen came to Cal Poly with four years of previous dragon boat experience from Mountain View High School, where she had been team captain since her sophomore year. Her knowledge and experience means she can help other paddlers develop necessary techniques. Nguyen says her love of racing comes from the dedication the sport requires.

The SLO Voyagers build teamsmanship by spending time together outside of paddling. Nguyen explained that some of her favorite memories with the team are from time spent out of the water.

“Last week, we all went to Sylvester’s, and it [was] our first time as a big group. It was really cool to meet everyone and learn why they joined. I think that team bonding means a lot,” Nguyen said.

SLO Voyagers had the opportunity to practice with SurviveOars, the county’s other dragon boat racing team. The SurviveOars are a group of breast cancer survivors and supporters who have been paddling in Morro Bay since 2006, according to Vice President Lynn Watkins.

The two Central Coast Dragon Boat Association-affiliated organizations practice together weekly. The SurviveOars also provide the SLO Voyagers with the necessary equipment to get out on the water.

“We love having the younger crowd come out with all of their enthusiasm and strength,” Watkins said.

The mechanics of dragon boat

Each of the 22 team members has a unique role. The boat is broken up into three parts, according to Chen. 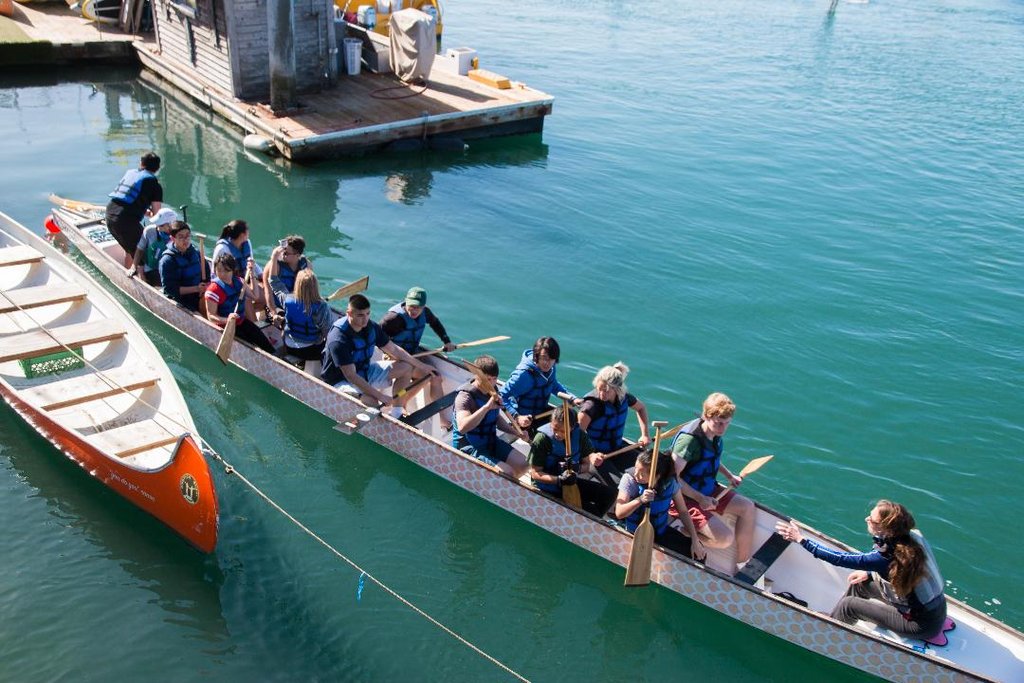 The first section of paddlers are known as the “front six.” They are the ones who set the pace and are typically good at keeping a long paddle stroke.

The next area is known as the “engine room.” This is where you will find the heavier and stronger paddlers who can keep the pace in the middle of the race.

The last section is called the “back six.” This is where the fastest paddlers on the team sit in order to “keep up with the water” that is being pushed quickly to the back by the rest of the team.

Traditionally, the last two spots are reserved for the “drummer” and the “sweeper,” though Chen’s team does not always fill these positions. The drummer, or caller, sits at the bow of the boat facing the paddlers and encourages them to keep their strokes synchronized. The sweeper, who stands at the rear, is the eyes of the boat and is responsible for steering and safety.

The SLO Voyagers have about 16 regular members as of now, but are hoping to add more.

“Right now, we’re always looking for new paddlers. We have a few spots open and if people just want to try it out, the first practice is free, so they can see how much they like it,” Chen said.