Spot the Senior Project: 9 student and faculty projects around campus 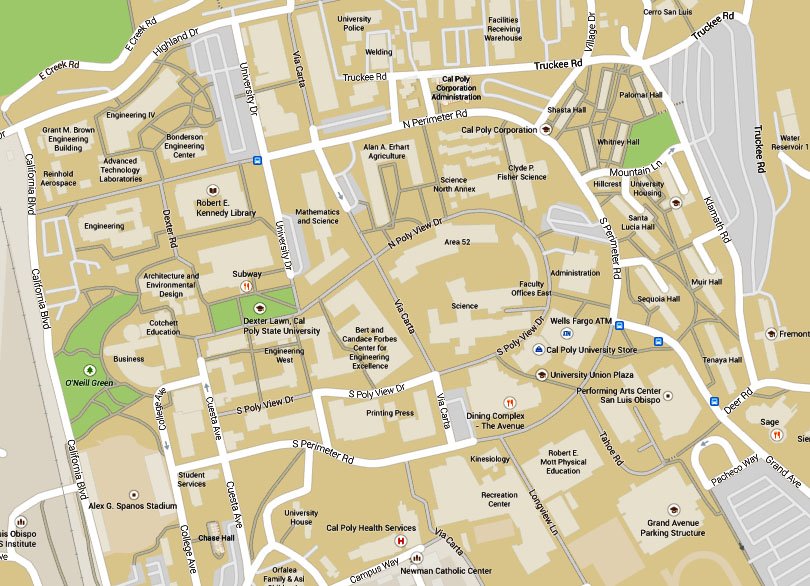 The bench you’re sitting on could have been a senior project. That sculpture you admire could have been a professor’s creation. Scattered through Cal Poly’s campus are dozens of artifacts built into the infrastructure and landscape that reinforce the “Learn By Doing” ideal. The following list highlights a few of the most interesting projects.

This 48-foot pedestrian bridge connecting the second floor of the Erhart Agriculture (building 19) was four students’ senior project, built in 1982. The students were assisted by architectural engineering alumni Nick Watry, who graduated in 1964. Watry approved the plans drawn up by the students and donated funds for the project.

“(Architectural engineering alumnus) Paul Dooley saw the need for connecting the external walk to the second floor of the building, so they drummed up an idea and talked to some professors who suggested they contact me because the bridge is made out of prestressed concrete, of which I am an expert,” Watry said.

Watry provided the connection to industry that the team needed to get the steel, concrete and equipment to build the bridge. It took two years and $20,000 to build.

One dance-inspired sculpture, located in a sitting area between Dexter Lawn and Education (building 2), was built by students in an architecture class taught by Howard Weisenthal in 2003.

The Orchesis director and Weisenthal’s students were designing a dance school for an in-class project. Students’ first step in designing the building was to come up with ways to represent dance in architecture.

“There is a great relationship between architecture and dance: Form, shape, balance, rhythm, order,” Weisenthal said. “So we got along really well.”

Another sculpture from this project, representing the tango, is perched on a wall in front of the Agricultural Sciences building and can be seen on Perimeter Road. Students from the class placed these structures without permission from the campus but the gardeners and maintainers of the campus gradually accepted them, Weisenthal said.

“Students love making stuff, but as an architect they hardly ever have the opportunity to make something full-sized because usually they are building models,” Weisenthal said. “This was a good project for them to realize how materials affect design.”

The last sculpture of the series was placed by the Christopher Cohan Performing Arts Center (PAC). It’s a figure of a man with a square hole in his chest, originally intended for posters of the latest shows coming to the PAC.

Assistant architecture professor Clare Olsen designed the installation on the ceiling of the main stairwell of Robert E. Kennedy Library in August 2013.

“I was given the option of many different places in the library and I chose the stairwell because it is a very dramatic space that is very light-filled and a sort of blank canvas,” Olsen said.

Olsen created many different renditions of the design and the library staff chose the one they thought best represented information in the digital age. Olsen’s students helped fold the powder-coated aluminum to create the volumetric condition that Olsen had designed previously.

“The students were really amazing at getting out the drill and making new holes if we needed to,” Olsen said. “I was really impressed with how smoothly it all went and I couldn’t have done it without the students. It was a really positive experience.”

This art installation outside the PAC’s entrance was donated by Patricia Kohlen, spouse of late architecture professor Ken Kohlen. Cal Poly alumnus Ivan McLean designed and built the piece in Fall 2013 with the architecture of the building in mind.

“I wanted something that would be beautiful, have a large physical presence and compliment the graceful curves of the PAC,” McLean said.

McLean brought several other sculptures from his home in Portland to get a sense of the scale that would be appropriate. He used more than a mile of 3/8-inch rod while building the pieces.

“I feel very honored to be a part of such a beautiful campus that has a special place in my life, appreciative of the generosity of the Kohlen family and proud to be an alumnus,” McLean said.

This house, located in the parking lot behind Engineering (building 13), was built in 2005 by Cal Poly students participating in the Solar Decathlon. However, the solar-powered house was not always there. The house was transported to Washington D.C. to be judged against 17 other universities nationwide. They ultimately took home third place.

Ten years later, Cal Poly has been chosen to participate in the Solar Decathlon again. The current Solar Decathlon Team is currently in the planning and fundraising phase of creating an entirely new house with an undetermined location on campus. They will be finished in October of this year. The team is made up of all different majors. Both architecture senior Michael Fletcher and electrical engineering senior Casey Smith have been working on the project since spring and have learned about interdisciplinary building.

“Not everyone understands information the same as you,” Smith said. “For instance, I can talk volts and watts just fine with mechanical engineers, but other disciplines might not know enough about the specifics to care. I have to make sure I can figure out a way to get the same information to an architect while being able to relate it to their way of thinking, so that they still hold it with the same importance.”

The new house will have to meet the net-zero energy building criteria and will have to be capable of running all of the appliances and charge an electric car all with solar power.

“[This] house is designed to be interactive, intuitive, and integrated. We focused on taking some of the many innovative projects that Cal Poly produces and integrating them into a cohesive design for a California home,” Fletcher said. “In our time of environmental crisis we want to show people that living a sustainable lifestyle is very attainable no matter who you are and it can start with your home.”

Other notable installations and projects by Cal Poly students, staff and alumni include:

A previous version of this story said the dance-inspired sculptures were built in 2004.