Students lead campaign to add AEDs in every residence hall

After realizing there is not one Automatic External Defibrillator (AED) in any residence hall on campus, two students are leading a campaign to add the life-saving device to every single one.

AEDs are portable electronic devices that automatically diagnose cardiac arrhythmias and can treat them through the application of electricity.

Business administration freshman Jack Pawela and architecture freshman Miles Henry were riding the bus one day when they saw an advertisement for PulsePoint, an app featuring a map locating every AED within the vicinity.

While browsing the map, the roommates realized there are no AEDs in any of the residence halls.

Pawela created a GoFundMe page to raise $62,475 to add 49 AEDs to campus, one for each residence hall. His goal is to have these AEDs added by the end of the academic year. As of March 20, the GoFundMe campaign has raised $220.

University spokesperson Matt Lazier said there are no AEDs at any of the residence hall front desks and the university does not plan to add any in yakɁitʸutʸu, the newest Cal Poly residential community, opening Fall 2018.

“Cal Poly Police respond to all emergency calls in campus housing, followed closely by paramedics,” Lazier said. “The Cal Poly Police Department has officers on patrol on campus 24/7, and each officer goes out on each shift carrying a defibrillator.”

But Pawela’s concern is time. According to the American Heart Association, every minute that passes in a cardiac emergency without CPR and defibrillation decreases the victim’s chance of survival by 7 to 10 percent.

“And as if that isn’t bad enough, brain damage resulting from cardiac arrest typically occurs within the first five minutes,” Pawela said. 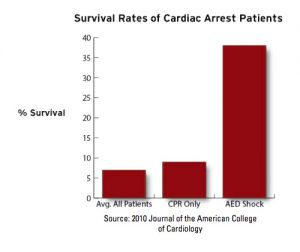 The closest AED to Poly Canyon Village is approximately .5 miles away.

“That means if someone sprints, and they know where the AED is — which most people don’t — it could take them 10 minutes just to get it, which is a huge safety risk,” Pawela said.

Pawela also created a petition calling for the addition of these AEDs with the hope of gaining support from University Housing, Associated Students, Inc. and administration.

“Hopefully we won’t have to raise that much money purely on a GoFundMe,” Pawela said. “From a fundraising standpoint, that is quite a bit of money. But from the school’s standpoint, that’s a lot more manageable.”

Though the price tag is high, Henry said he believes the benefits outweigh the costs. He said he hopes the university will also see the need for more AEDs and contribute to the costs as well.

“Even if this whole operation were to save one student’s life, I think that would easily be worth the money,” Henry said.

As of March 20, the petition has more than 230 signatures.

“An AED saved my father’s life,” Belinda Randolph, a donor, wrote on the GoFundMe page.

The trending GoFundMe page has garnered more than 150 Facebook shares and raised $220 toward the cause as of March 20.

“A lot of times, these things only change after a tragedy happens and after people realize, ‘Had we had one of these, it would have been a lot better,’” Pawela said. “I’m really trying to get ahead of that and go for prevention rather than cure.”