The man behind the maze: Cal Poly student creates mazes in the sand, washed away with the changing tides 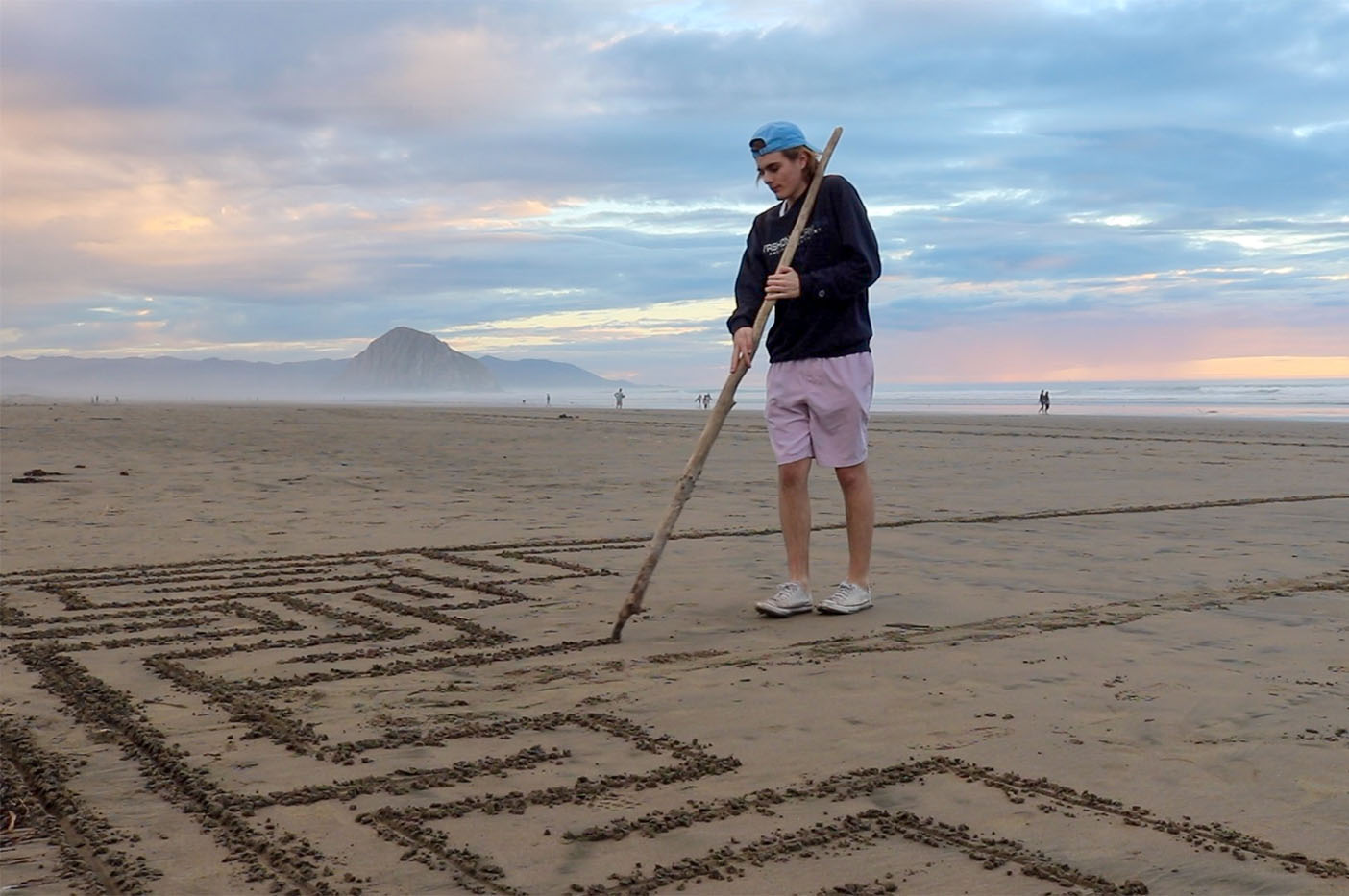 Like clockwork, the tides in Morro Bay rise and fall every day. For just a few hours, the beach becomes a blank canvas that environmental management and protection sophomore Sean Dahlberg takes advantage of. With nothing more than a long curvy stick of driftwood and his imagination, Dahlberg gets to work.

Every project starts with drawing four simple lines in the wet sand. He estimates how big he wants his creation to be based on how long he has until the tides rise again. On a recent Sunday afternoon down on the Morro Bay Strand, he made a canvas 40 feet long by 40 feet wide.

Once his frame is set, he begins methodically drawing within the lines.

“I like making a spiral to start,” Dahlberg said as he dragged a large stick in the sand.

He is making a maze.

“You will never see two of my mazes that look exactly the same, every one will be unique in its own way,” Dahlberg said as he carefully drew seemingly random patterns in the sand. “I’m not really keeping track of how I got to a point but just that you can get to that point.”

Though they may look sporadic and uncoordinated, Dahlberg’s strategy for creating these large intricate mazes is far from random.

“I like to do some kind of zig-zag pattern where I have two paths coming back and forward, you can’t really tell which one is which until one gets cut off,” Dahlberg said.

He utilizes plus shapes, T-junctions, parallel lines and really any pattern he decides to fill in the maze. He works to fill in certain sections with dead-ends, double backs and junctions to make the maze more challenging to solve.

“It’s pretty much a puzzle that you can walk into. I like to open up the grid and make a bunch of possible paths and potential routes you could take to get to the end,” Dahlberg said. “You want confusion; you also want people to walk the paths rather than trying to solve it from the side.”

Fully completing a maze takes Dahlberg anywhere between two and three hours, he said as he cut off another path. In that time he is frequently interrupted by locals, tourists and beachgoers enquiring as to what he is doing.

On this day, tourists from San Francisco stopped to take pictures. A small family with kids began walking the unfinished maze trying to decipher the spiral shape at the start. An 80-year old man jokingly asked if he was making crop circles so that “the aliens” knew where to land.

“I think most people are kind of in awe and kind of surprised because they’ve never seen anything like it,” business administration sophomore Will Zeliger said, who is a friend of Dahlberg that often accompanies him to make his mazes. “It kind of provides an attraction where you can get a community of people together.”

Dahlberg first started making mazes when he was young and would visit his extended family on Vashon Island in Washington for the 4th of July.

“My dad had a walking stick and he went out to the beach and started drawing a maze… I remember having a lot of fun trying to solve the maze that day,” Dahlberg said. “I kept asking him to make me a maze… you know he’s got other things to do, he’s not trying to make a maze every day, so he told me to try making one myself.”

His dad taught him how to pick a good stick to draw with and how to keep track of his paths in the maze.

“My first maze was much smaller… I actually liked making the maze just as much as I liked solving the maze,” Dahlberg said.

The young maze-maker began crafting his creations every time he’d visit Vashon Island and eventually found the perfect stick for his projects.

“One year I went up there and I found this stick and it was the perfect size,” Dahlberg said. “It helped me draw lines a lot straighter and I could rest it over my shoulder and just back up.”

The piece of sunbaked, smooth and curvy driftwood made its way from Washington all the way to San Luis Obispo. Dahlberg keeps it in the trunk of his car in case he ever wants to make a spontaneous maze somewhere.

“I think for Sean it’s almost a way to get out and kind of escape the stresses of college,” Zeliger said. “He’s been doing this for so long, it’s almost like every maze he goes out there and tries to improve it compared to the last.”

Dahlberg sees creating mazes as a hobby and a creative outlet, he said, now about halfway done crafting his creation. He will often invite a group of friends to accompany him and have a beach day while he works on the maze.

After Dahlberg completes his project, he and anyone that wants to try to solve the maze walk to try to find their way out.

“I know people who have walked through the first try and it’s taken a matter of minutes… there are some times when you see people stuck in a maze for 10-15 minutes,” Dahlberg said.

However, his friends aren’t the only ones who try their hand at solving the maze. Beachgoers oftentimes are waiting for the college student to finish so they can make an attempt of their own.

After Dahlberg solves the maze, his work is done and he leaves his art piece for others to enjoy. According to the TideForecast.com, Morro Bay’s tides cycle every six hours. He finishes just before sunset and his creation only has a few hours of life left for people to try their hand at cracking it.

Then, just like clockwork, the tides rise and the beach is wiped clean, now a blank canvas once again waiting for the maze-maker’s next creation.