Tougher than getting the degree: getting California tuition

Four winters ago, Travis Spanu was shoveling snow from the night before just to pull out of his driveway. Last winter, he was wearing shorts and a T-shirt, drinking his iced coffee on his way to his engineering class.

Students from across the country move to California to begin their college lives and begin the process of obtaining California residency — a task that out-of-state students, who make up 10 percent of Cal Poly’s student body, are finding to be almost as difficult as completing their education.

Many out-of-state students thought they would achieve California residency by their sophomore year. But, on average, the process takes three years to complete due to state regulations.

Four years ago, Spanu, an industrial engineering alumnus, chose to attend Cal Poly with the plan of only paying out-of-state tuition for his first year.

“When we found out that I had two more years to pay, I had to choose how much I wanted to stay at Cal Poly,” Spanu said.

This is a decision other out-of-state students have had to make as well.

“I came to Cal Poly expecting to be able to afford and pay for out-of-state tuition for the one year,” civil engineering senior Rex Stewart said. “My plan kind of backfired.”

So why do so many students arrive at Cal Poly with the one-year expectation?

Associate Vice Provost of Marketing and Enrollment James Maraviglia said the one-year residency plan was the university’s practice until about four or five years ago, when the legal interpretation of the state residency code was renegotiated.

“It doesn’t fall into (admissions’) hands or the university’s,” Maraviglia said. “It comes down to state. As the state resources got squeezed further and further, the legal interpretation of who could become a resident became just as strict.”

An out-of-state student must go through a series of steps in order to become a California resident. The first step most students take is getting their California driver’s license. From there, most immediately find a job and begin to pay California state taxes. The final, key step is what causes the process to take three years. 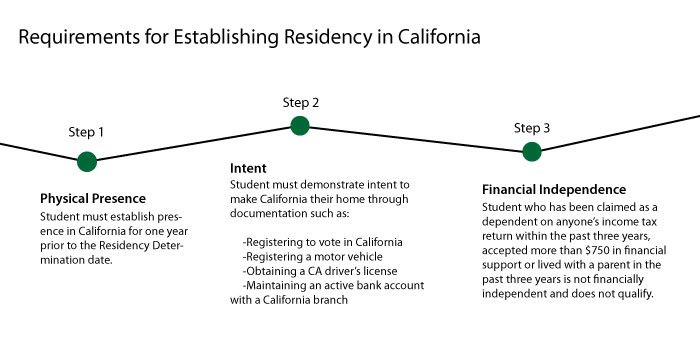 According to the new state residency code, the out-of-state student must prove their independence from their parents for three years.

“If you’re driving around in your parent’s car, all it shows is that you still are dependent on your parents,” Maraviglia said. “It is statutory. It’s the law, and it’s not really any different to any other state.”

The one-year to three-year process was not a gradual effect. When the state’s budget crunches began, the legal interpretation of the new state residency law drew the line in the dirt.

One year turned into three years and 18- to 20-year-olds were placed at the crossroads of independence and maintaining help from their parents.

Spanu’s mother Michelle said she was frustrated by the change.

“Anger didn’t cut what I was feeling,” she said. “My son finds out that he more than triples his student debt after his first year, and I can’t help him if I want him to, at some point, gain residency.”

Both Spanu and Stewart achieved California residency in their third year at Cal Poly, but neither did so easily.

Stewart took time off school in order to establish residency.

“I actually took a few quarters’ leave from Poly because I wanted to travel within the state and work to save up some money,” he said. “I built up my independence years without paying the insane tuition, so it worked out.”

Ten percent of Cal Poly’s student body is paying more than double the amount of their in-state counterparts for their education. That is the price they pay to attend a school away from the snow.