Cause and effect: The proposed Health Services Fee

Feeling too weak to wait for her appointment, anthropology senior Ally Shyvers left the Health Center waiting room to rest at her apartment. Little did she know, not receiving treatment would quickly become a life-or-death situation. The next morning, her roommates found her nearly unresponsive and rushed her to the hospital. The diagnosis: bacterial meningitis.

When Shyvers first arrived at the Health Center, she was seen for triage and then sent to the waiting room until she could be seen by a doctor. After sitting in discomfort for more than two hours, she ultimately went home while her symptoms worsened. That delay almost cost Shyver her life.

“Since I was so late going to the hospital, I had a really small chance of survival and potential to have limbs removed,” Shyvers said.

According to the Center for Disease Control, death from meningitis can occur in as little as a few hours.

With long wait times, a short operational schedule and limited staff, the Cal Poly Health Center is facing significant problems which they are hoping to address by raising the current student health fee from $315 per year to more than $612 per year.

Shyver’s experience paints a dramatic portrait of the problems currently facing the Cal Poly Health Center, yet these problems are not going unnoticed. Dr. Aaron Baker serves as the Medical Director at the Health Center and feels that something should be done to solve the problem.

“We’ve been watching the satisfaction of services plummet,” Baker said last week in an open forum about campus health and wellbeing. “If we don’t do something now, it’s not going to get better.

The Health Fee was proposed in response to the following problems after analyzing data collected over the past 10 years from customer service surveys:

The proposed health fee is designed to address these concerns, starting with increasing the availability of appointments for students.

Currently, there are not enough appointments available to meet student demand. Students either have to wait three hours for service, go without service or pay out of pocket for treatment off campus at a different treatment facility.

In the California State University (CSU) system, health centers operate either in the form of a walk-in clinic or by appointment only.

“We have a hybrid of the two, some same-day appointments and some walk-in appointments,” Baker said. “I would like you to know when you will be seen and when you will get out, for a more respectful use of your time.”

Due to under-staffing, counseling services faces similar issues to medical services with its inability to accommodate student needs. According to Director of Counseling Services Geneva Reynaga-Abiko, students who are in crisis mode receive treatment first under the current triage model.

Approximately 30-35 students who are not in crisis mode are turned away daily due to lack of availability. The problem comes down to capacity.

Students for Quality Education (SQE) advocate and political science senior Mick Bruckner visited counseling services in the past for personal mental health treatment and voiced his dissatisfaction with the current system.

“The criteria they use to assess students to get more than that amount is whether or not they are an imminent threat to themselves,” Bruckner said. “Where is the line? … Why is it that I have to be an imminent threat to myself to receive treatment? That fundamentally misunderstands how mental health care should work.”

While both Health and Counseling Services utilize a triage system, or a system in which patients are analyzed for levels of urgency to decide which cases should be prioritized, they do not operate identically. After becoming Director of Counseling Services in 2013, Reynaga-Abiko did away with the wait list component for students seeking counseling in an attempt to better the model.

“Ultimately, there is no perfect system for scheduling in any clinic,” Reynaga-Abiko said. “We decided to have a system that does not require a waiting list, which is great and solves that problem, but then we have the problem of only being able to see most students for stabilization purposes and don’t have enough counselors to do more long-term therapy.”

Not only does it affect the number of appointments, the lack of staff also means a lack of operational availability. Liberal studies senior Hannah Stevenson came down with a severe case of pneumonia during her first year at Cal Poly but was unable to receive timely treatment for this reason.

Turning away students seeking treatment was a common problem brought up in the health fee open forum. Though the Health Center’s posted hours are 8 a.m. to 4:30 p.m., Campus Health & Wellbeing administrators stated the the Health Center often closes early, leaving about one-third of the business day where patients are turned away.

“This is further compounded by two factors,” Director of Wellbeing and Health Education Genie Kim said. “One, the lack of availability of general health care in the San Luis Obispo area other than urgent cares or emergency rooms, and a significant portion of Cal Poly students carry medical insurance that is not accepted in San Luis Obispo County.”

As Kim points out, because Cal Poly’s location is unique compared to other CSU campuses, the on-campus Health Center is one of the only local providers able to serve the university’s more than 21,000 students.

Health Center administrators stated that current operating costs are exceeding the funds allocated by the CSU and existing health fee as it stands, leaving the Health Center short of the revenue needed to serve students for a low cost.

The last health fee adjustment took place in 2009. Since then, the health fee has remained relatively stable even though there was a 55 percent compounded increase in medical costs.

If approved, the fee will be phased in over a four-year period. Only new students will pay the fee and anyone who is a current Cal Poly student at any level will continue to pay the fees they agreed to when they began attending university. However, continuing students will still benefit from enhancements over time. 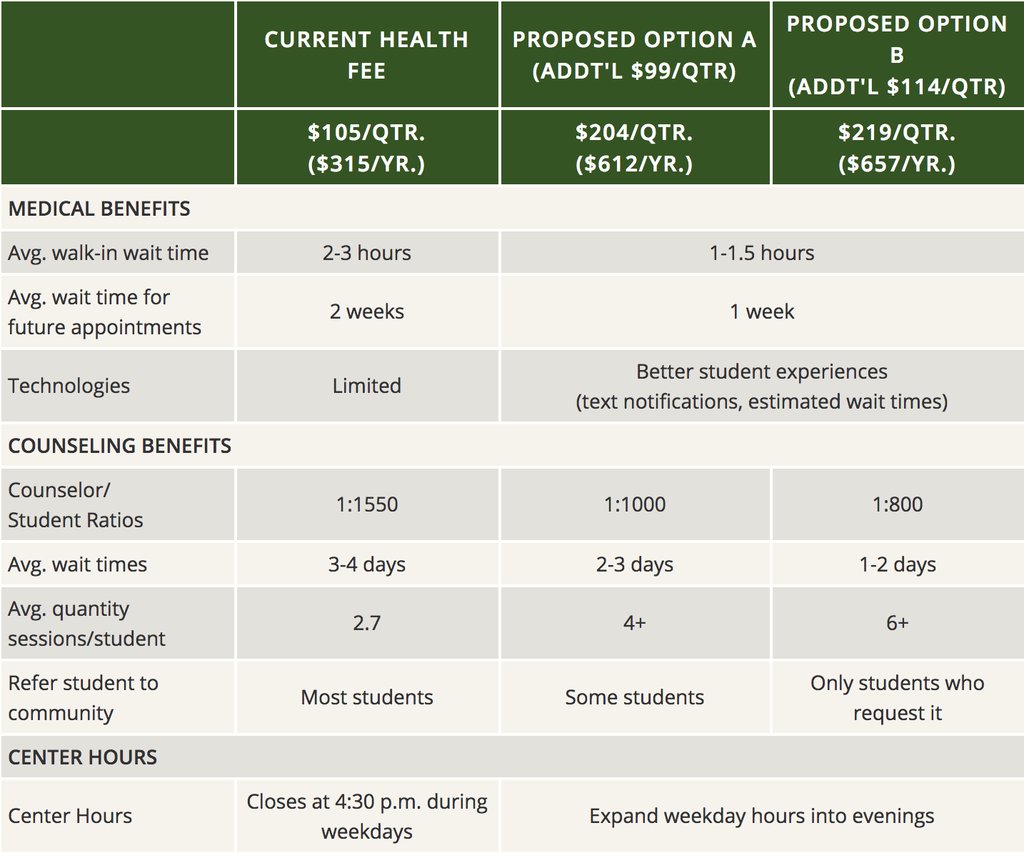 The most significant feature of the proposed health fee, as well as the greatest difference between the two options, is in regards to mental health and counseling services.

While meeting the gold standard for mental health is achievable with Fee Option A, administration aims to exceed this national best practice benchmark through Fee Option B.

In this case, students would only be referred to the community if they request it, a difference from the current system of referral to group therapy or outside providers.

In order to increase services, current fees would nearly double. Thirty percent of funds from the adjustment will be set aside to cover the cost for students receiving financial aid.

Funding for the fee comes from two sources: CSU Operating Fund allocations and revenue generated from the Health Services fee. If the proposed fee passes, Cal Poly would have the second highest health fee in the CSU system.

While health officials defend the proposed fee amount, some students are skeptical of the way finances have been allocated to double the fee. Under Title 5 of California law, student fees must fund the health center.

“Students are paying way more than we should be,” political science senior Matt Klepfer said. “The state needs to pay for instruction and we have already enough fees that can be re-allocated toward other services.”

However, with the rising cost of health insurance, other students find the fee increase justifiable.

“As someone who has utilized the health center a lot, I think the proposal is beneficial since health insurance is so expensive now,” graphic communication senior Alyssa Whitney said. “It’s too expensive for a lot of my friends to go see a doctor outside of the campus health center.”

Currently, 97 percent of the budget for the current Health Services fee goes towards staffing, which doesn’t leave much room to finance increased services. Under the current budget, services like the travel clinic and vaccinations have been eliminated. This is equated with challenges students are currently facing with Health Center services.

“I feel that right now their resources are too limited on what they can do to treat students,” graphic communication senior Sydney Clark said. Clark was unable to receive treatment at the Health Center after being diagnosed with mononucleosis. “There isn’t a point in increasing hours if they are offering the same resources. The Health Center would need to increase the level and quality of care for me to support a fee increase.”

In the current proposal, fees will go towards additional medical and mental health staff, not facilities improvements or administrative staff. However, student input like Clark’s can influence the way that funds are allocated.

Administration is using alternative consultation for the Health Fee proposal instead of a referendum. This means the administration collects student feedback through open forums, comment cards and student presentations over a 30-day period. Comparatively, in a referendum, students represent their opinion by voting.

For those unable to attend the presentations, written feedback can be given through comment cards at the Health Center or online through the student portal until Sunday, Nov. 19.

After the consultation period ends, the results of student feedback will be compiled into a summary report by the Office of the Vice President for Student Affairs. This report will be used to advise President Jeffrey Armstrong, who ultimately makes the final decision on whether or not the Category II fee will be phased in.

To provide feedback on the student health fee, visit https://chw.calpoly.edu/healthfee/commentform/.