The strong smell of wood finish and stain lingered in the air of the Industrial Technology Fabrication Space. Whiteboards listed out long to-do lists and goggle-clad students crowded around large tables, measuring, sawing and cutting.

This lab is located on the outskirts of campus near Engineering West (building 21). It serves as the headquarters for the production of the Liquor Locker, an at-home beverage dispenser created by a team of 14 industrial technology and packaging (ITP) seniors at Cal Poly.

Liquor Locker is the product of Applied Business Operations (ITP 467), a capstone class for ITP students. The instructor, ITP professor Jim Bentley, describes the course as a culmination of the ITP curriculum. It combines everything from business management to marketing strategies as students come up with the idea for a product, manufacture it en masse and market it to an audience with the goal of selling every unit.

“It’s set up to be as much of a real world experience as possible,” Bentley said. “I tell [the students] initially, ‘I want to pop the bubble of academia and throw you into what life is like in the working world.’”

On the first day of class, each student arrived with 20 product ideas prepared. After a couple debates and brainstorming sessions, the concept of the Liquor Locker evolved from scouring Pinterest for a creative idea and the group’s shared love for hosting guests.

Liquor Locker was an attractive idea because of its originality, Assistant Operations Manager of Liquor Locker and ITP senior Madison Fleming said.

“All of us had never seen anything quite like it; it’s a pretty original and unique idea, and we thought that worked well considering this is a student project. We wanted to create something you can’t buy anywhere else,” Fleming said.

The finished Liquor Locker is comprised of sealed and stained wood, welded metal and plastic spouts assembled to create a rustic-looking mini-bar. The display includes three spouts, each with liquor bottles mounted on top, turned upside down and held secure. The two  side spouts release exactly one fluid ounce of liquor into a shot glass, while the middle spout is free flowing for wine and beer.

“The Liquor Locker is an aesthetically pleasing, alcohol-dispensing mini-bar that allows anyone at home to craft the perfect beverage. You don’t have to be a bartender to make the perfect drink each time,” Fleming said.

The Liquor Locker team created their first prototype in mid-October. Now, their goal is to produce and sell 130 units before finals week.

Most team members can still be found in the industrial technology labs every day of the week, sometimes staying until 11 p.m.

A Learn by Doing experience

In their lab sessions on Mondays and Wednesdays, the team worked on preparing raw materials to be used for assembling the final product. Wood had to be cut, sealed, stained and glued together to form the shelves of the Liquor Locker. 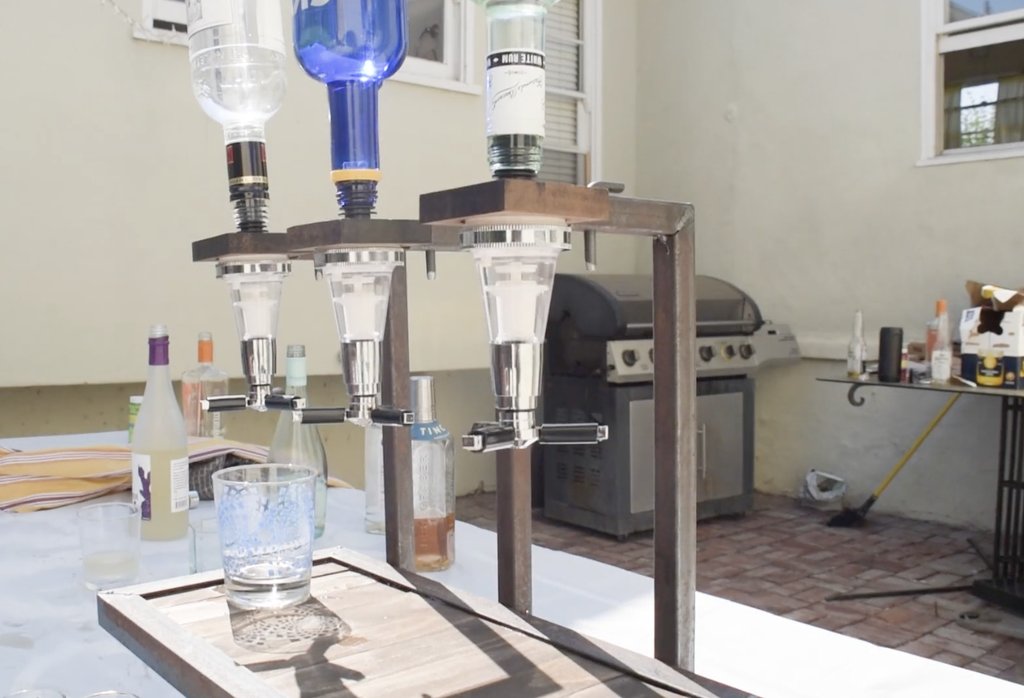 Metal was stripped and cut so it was ready for welding. Welding itself is an intense process and requires accuracy and precision so the team can properly assemble the final product.

Working in lab can be stressful. Bentley oversees the students’ work, but doesn’t make it easy.

“I want to put up obstacles, but not barriers. I want things to be hard, but not impossible. And the reason is that is if it’s easy, nobody learns anything,” Bentley said. “If it’s hard and they overcome those obstacles, they learn a heck of a lot, and that’s the goal of the class.”

Bentley’s very first class assignment was a barbecue to foster community within each team.

“It’s my first assignment so that people get to know each other and work together as a team. My biggest mission in the first half of the quarter is to get the teams to build and mend and work well together – once that happens then the rest of it comes together,” Bentley said.

The Liquor Locker team started out as the “quietest group” at the beginning of the course, but managed to warm up to each other after working together for a quarter. Their work sessions in lab include high spirits and friendly banter.

“We now know each other well and have our inside jokes. We have a good balance of play time and work time in the lab – I think it’s important to keep up that play time because it’s good for morale and keeps us close as a team,” Fleming said.

The class itself has equipped the students with real-world skills related to creating a company and overseeing the manufacturing process of a product. The project has brought unique experience to the students who, in 10 weeks, have essentially created a company. Though they’re proud of their finished product, the team said they don’t yet have future plans for continuing production of the Liquor Locker after fall quarter.