Scrolling through the fashion marketplace app Depop, thousands of thrifted finds flood its users’ screens. Buyers sift through $50 slip dresses, vintage band tees and an assortment of other hot commodities.

This influx of resold clothing and accessories paired with steep prices has sparked a conversation about the ethics of reselling used clothing, said local resellers like junior Advaitha Bhavanasi and employee of Old Mission School Thrift Shop, Susana Toner.

Depop is one of many reselling platforms, along with other apps, such as threadUP, The RealReal, Poshmark and Instagram to sell old garments.

“Everything that we sell is looked up to see its retail prices, and then we try to give a fair price based on obviously the condition of everything,” Toner said.

“Stores can get away with charging more because they know someone will buy it eventually,” she said.

Toner said reselling can be an asset for individuals who would rather not thrift themselves and would pay more for curation, but said resellers need to be mindful of their purchases.

“When [resellers] just come in and take a lot of clothes from the people who need them at the thrift store prices, that kind of gets out of hand –– when they buy more than they need,” she said.

Fred and Betty’s Thrift Store assistant and creative manager Megan Arlo said thrift store prices can be attributed to the different needs of stores along with inflation and increasing wages.

In regards to the reselling community, Arlo said she wholly encourages the practice as it is mutually beneficial on both sides.

“[I] definitely have seen people resell stock from our store, which is fair game,” Arlo said. “If you come out and you find it and get a certain price then more power to you if you’re able to sell it for more than us.”

Due to the sheer amount of clothing available and eventual textile waste, Arlo said reselling does not hurt those that rely on thrifted items.

“If you walk through any Goodwill-type store, there’s aisles and aisles of clothing,” Arlo said. “​​This one, awesome clothing piece a person is reselling is not necessarily going to affect the chances of someone who is more in need of finding something because while it may not be the most trendy, it will be affordable.

Stores in San Luis Obispo vary on their policies for unsold inventory. Old Mission School Thrift Shop serves as a last stop for much of its inventory and unsold items after 4-5 months are thrown out, said Toner. Unsold clothes at the Assistance League of San Luis Obispo County Thrift Store are given away to other nonprofits, according to their assistant manager Susan Pino. Fred and Betty’s works with another company to recycle the fabric and linens of unsold inventory, Arlo said.

Statistics junior Caitlin Lota estimates 90% of her clothing is thrifted or secondhand. She resells occasionally, mainly when clothing she has bought does not fit her.

Lota said instead of donating her clothing, reselling allows her to see the cycle of her clothing and ensures more longevity.

“A lot of the clothing that gets donated ends up in the landfill anyway, so I’d like to resell it myself to make sure it goes to somebody who actually wants it,” she said.

A more specific issue Lota has noticed is the lack of inclusion of larger sizes in the industry.

“A lot of clothing that are larger sizes are usually branded as oversized and not the actual size,”  she said. “[An issue is] buying out these clothing [that are] already hard to find and reselling it at a higher price.”

“You’re paying that person for their time spent in the thrift stores [because that takes patience and skill],” Lota said. “Also, a lot of people who resell will upcycle the clothes, so if it has a [problem], they will fix that — so you’re also paying for that service.”

Computer science freshman and Depop seller Ian Loo said reselling is one of the factors of rising costs of thrift stores but is not entirely responsible.

“More people are shopping at their stores, not necessarily reselling, but because it’s more affordable [than retail options],” Loo said.

Loo said overall the good of buying secondhand and through resellers outweighs the negative.

​​“Either way, you’re reusing clothes,” he said. “It’s more sustainable and better if you buy thrifted clothes rather than the alternative to buy new clothes.”

Business junior Advaitha Bhavanasi started reselling during high school but revived her work with a friend through an Instagram and Depop storefront recently. She describes her shop as “eclectic and vintage,” often incorporating handmade or upcycled clothes and featuring an occasional styling video.

Bhavanasi said the reach of gentrification, defined as the process of making a product, activity or other forms of commerce appealing to those with more affluent tastes, has the potential to have real repercussions in the thrifting scene.

“The gentrification of thrift stories and just [generally] everything is becoming increasingly more of an issue because sustainability has become more of a trend than like a lifestyle, so people are going thrifting and not considering how their presence is causing people to not have clothes,” Bhavanasi said.

Yet, she said the ultimate blame weighs on stores themselves since the sheer amount of clothes begs another question.

“But at the same time there’s just so much that I feel it is possible for everyone to have some,” Bhavanasi said. “I think the real problem is why stores feel like they need to increase prices rather than there not being enough for anyone, no matter how much money you have.”

In terms of ethics, the pair made an effort to give back to charities and organizations.

“Every drop that we did, we had a focus on another organization [and would donate part of our proceeds],” Bhavanasi said. “It ranged from like 15% to 30%.”

Bhavanasi said she also tried to price fairly, weighing in the cost of curation, shipping and affordability.

In regards to what to keep in mind, Bhavanasi said buyers from resellers should “know where the money is going,”— whether it’s to the reseller’s main form of income, a side hustle or to charitable organizations. For resellers, Bhavanasi suggests they can limit how much they buy from thrift stores, leaving clothes behind for others to purchase and remain fair when calculating pricing. 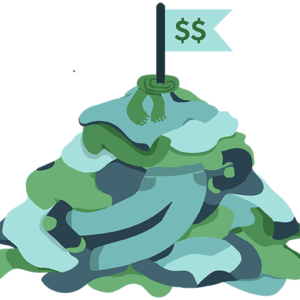