A jukebox belted upbeat country while glasses clanked and raised voices chattered around her, but all communication studies senior Sarah Riley could hear was the thick sloshing of her drink being made.

She watched as 3⁄4 ounces of Bacardi 151 rum, a tablespoon of Worcestershire sauce and a dash of Tabasco were mixed together to make the staple birthday cocktail, the “Bull Sweat,” from San Luis Obispo bar Bull’s Tavern.

Then Riley was hoisted onto the bar to chug it down in front of the crowd. A bartender rang a brass bell behind her, ushering in her 21st birthday bar crawl. That was one item crossed off her checklist. Only 20 more to go.

The tradition of a 21st birthday bar crawl is considered a rite of passage into the downtown bar culture for some in San Luis Obispo. Participants are tasked with 21 challenges, including a number of bar­-specific drinks and activities such as sticking a piece of gum on the walls of Bubblegum Alley.

While there are certainly concerns about a celebration that traditionally involves drinking, some students have completed the challenge without consuming a drop of alcohol and have still found it rewarding.

The bar crawl experience was positive for Riley, and served as a milestone for her 21st birthday.

“I was comforted knowing the people I was with would make sure I had a great time without forcing me to test my limits in the process,” she said. “I knew if I said no to a certain drink, it was my choice and I would be supported regardless.”

And there were many opportunities for drinks. Along with the infamous Bull Sweat, there are other staple 21st birthday drinks and tasks, described below. 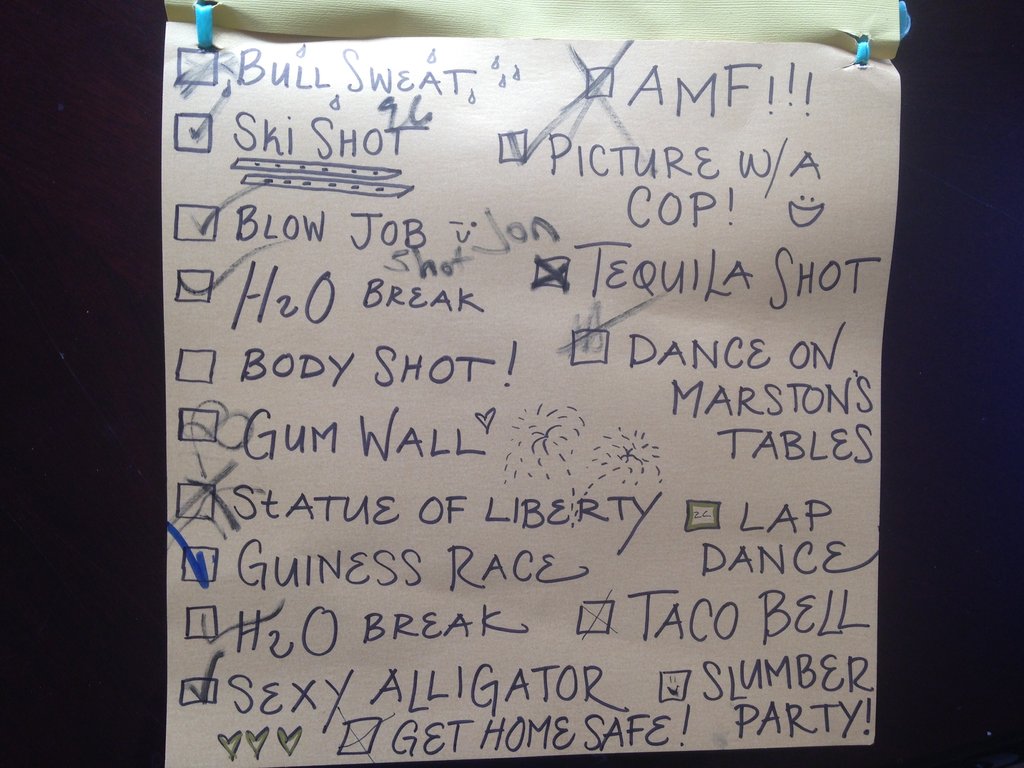 Riley said that while there was some pressure to complete the bar crawl tasks in a certain manner, it was helpful to follow a plan, as opposed to drinking aimlessly for the sake of turning 21.

“Celebrations across the board for 21st birthdays will usually include a lot of alcohol, but completing the tradition with a decorative sign, a plan for the night and a list of things to do. It makes it easier to construct an awesome experience, rather than just sit in one place and drink excessively,” Riley said.

Though Riley completed a standard list of drinks and tasks, it is more common for guys to undergo gender-specific challenges that include more difficult drinks.

This includes Black Sheep Bar & Grill’s “silver slipper.” The drink, generally reserved for men on their bar crawl, consists of a glass of gin and a raw egg that’s cracked on the crawler’s head and dropped into the glass. And Marston’s Bar and Grill serves men a “six shooter,” which is a line of six shot glasses — three with water and three with vodka, served in random order.

Architecture junior Ryan Stone is new to the downtown scene, having just experienced his 21st birthday bar crawl in March. But he said he’s already seen a difference in the experience for men and women.

“I think that there is definitely a gender pressure,” Stone said. “For girls, it’s like; ‘Let’s get you dressed up, let’s make a sign, let’s go downtown, but let’s not kill ourselves.’ Girls put on the show almost with the signs … For guys, they typically don’t have a sign and go with their bros, where there is definitely more pressure. There is typically more ‘bro pressure’ in society, which is unfortunate.”

Despite the pressure Stone experienced, he found that most friends respect the birthday person’s limits.

“I don’t think it’s negative, I don’t think it’s necessarily positive either,” Stone said. “People can pressure you to go into a bar crawl, but at the end of the day, people are typically respectful of your choices. If your friends are pressuring you to go hard … maybe you should consider getting new friends and not hating on the bar crawl.”

Though men and women often have different bar crawl experiences, one common crossover is the scavenger hunt item “picture with a cop,” which requires the bar crawler to find a police officer on the street and take a photo with them.

According to San Luis Obispo Department Capt., Chris Staley, cops across the board are well aware of this tradition. Staley has seen a number of 21st bar crawls in the 21 years he has worked for the department.

“I don’t have a problem with (the tradition),” Staley said. “When there is an opportunity to have a positive, light-hearted interaction as opposed to a law enforcement situation, it’s good.”

However, Staley did express some concerns about binge drinking being encouraged for those who wait until their 21st birthday to drink for the first time.

“All of us have turned 21 at one point,” Staley said. “The only problem I have with it is, I think it encourages large consumption of alcohol. To encourage someone to drink that much who might not be familiar with it is dangerous.”

No alcohol, no problem

Despite these concerns, there is an alternative way to enjoy the bar crawl, according to journalism junior Suha Saya. Saya does not drink alcohol as a personal choice, but didn’t want to miss out on this unique San Luis Obispo tradition.

“It just seemed like a cool experience and I didn’t want to turn 21 in SLO without experiencing it,” Saya said. “I didn’t want my personal choice of not drinking to stop it, so I decided to do it anyway.”

Saya was able to get nonalcoholic versions of all of the classic bar crawl drinks, even the Bull Sweat, and said it didn’t take away from her having a good time.

“Just the experience of being in Bull’s and having to stand up on the bar and drink the Bull Sweat was just crazy and exhilarating and exciting,” she said. “But it tasted terrible.”

Whether the drinks are alcoholic or not, bartenders in San Luis Obispo seem to have a favorable attitude about the bar crawls and what they symbolize.

“I think it’s a good thing, you’re gonna go out and drink anyway so you might as well have something to remember it by,” said Jessica Rosenkrans, a bartender at Frog and Peach Pub. “I don’t mind it, I think it’s fun. People get so excited and you want it to be a positive experience for them. For bartenders, (participants) are more likely to return if you make their birthday something special.”

Saya’s experience was special, alcohol or not, because of the bustling nightlife and fun atmosphere downtown San Luis Obispo has to offer —especially when it comes to 21st birthday celebrations.

“I think overall, it is a positive culture, until maybe it goes a little bit overboard and somebody actually gets sick,” Saya said. “But overall I think it’s a fun experience and I understand why people get excited for it, it’s just a way to mark that age. Go as much as you think is healthy and don’t make it so that its a harmful bar crawl.”