IFC has voluntarily placed themselves on probation. This is in response to a racist photo of a Lambda Chi Alpha member wearing blackface that surfaced earlier this week.

The IFC Executive Board, along with chapter presidents, will implement and carry out a plan of action during the probation period, which will be released April 20.

“We want to acknowledge our role in contributing to an environment that perpetuates racism, and are making a commitment from this day forward to hold our community more responsible and hold them accountable to the values we strive by,” the press release said.

IFC Statement of Probation by Mustang News on Scribd

A group text between the IFC Council and Presidents ’17-18 was leaked and posted on a Facebook page.

IFC President Colton Marino said he will not be speaking on the specifics of the photo.

“However, what I do want to mention is the importance of us banding together as an IFC community,” Marino wrote. 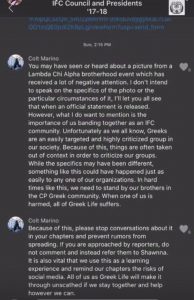 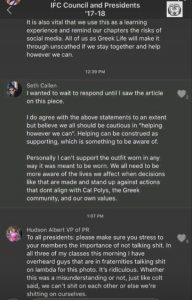 At the student forum put on by the president, the Office of University Diversity & Inclusion and Student Affairs tonight, President Jeffrey Armstrong said Panhellenic is voting on whether or not sororities will be put on social probation.