An Emergency Town Hall is being held tonight at 8 p.m. in Engineering IV (building 192, room 106). It was formed by campus organizations in reaction to the events that occurred with Lambda Chi Alpha this weekend.

According to the event page, “All are welcome. The voices of Folks of Color will be centered, given the racist nature of the event.”

Students walked to the Lambda chapter house to talk to the fraternity. https://t.co/OEyTXolk3d

When protestors approached the door, a Lambda Chi member slammed the door in their face.

Lambda Chi Alpha has been placed on interim suspension while the university continues its review of the weekend, university spokesperson Matt Lazier wrote in a press release.

With an interim suspension, the university suspends its recognition of the fraternity and requires a fraternity chapter to suspend all functions and cease all events and activities.

“Racism and hate are unwelcome here, in any form,” Dean of Students Kathleen McMahon said in the press release. “Cal Poly is focused on enhancing the diversity of our campus and providing an environment that is welcome to all who would study, work or visit here.”

No Lambda Chi Alpha representatives were present, because the fraternity had been suspended by national headquarters and the university prior to the meeting, according to IFC president and political science junior Colton Marino.

Lambda Chi Alpha member and agricultural business senior Jack Gilchrist was present. Gilchrist was representing IFC as the Vice President of Risk Management and  was unable to comment on Lambda Chi matters.

Dean of Students Leadership and Service Director Jason Mockford announced at the meeting that Lambda Chi Alpha’s national headquarters has placed the Cal Poly chapter on interim suspension as well.

“The national fraternity has put Lambda Chi Alpha on limited operations which means that they can’t have any sort or meetings without a university official present,” Mockford said.

Students are calling on someb from Lambda Chi Alpha to say something about the blackface https://t.co/jZJ6VExx0U

President Jeffrey Armstrong sent out an email to the campus community regarding Lambda Chi Alpha’s event. The university will continue to investigate the matter.

“What we do know is the pictures from the event have caused pain to many members of our community. For those who have been hurt and offended, please know that I stand with you,” Armstrong wrote.

The president expressed his disappointment in viewing the images.

“Like many of you, I have seen the images that circulated on social media and find them to be painful and embarrassing. As president of Cal Poly, and on behalf of the entire Cal Poly family, I am ashamed,” he wrote.

Armstrong wrote that these actions, even if they may be unintentional, are not to be tolerated at Cal Poly.

“They are senseless acts of ignorance that injure and alienate valued members of our community. They must stop,” Armstrong wrote.

Diversity should be celebrated and cultivated on this campus and if our student body is not reflective of that, “we have failed,” Armstrong wrote.

He ended his email calling for mutual respect and working toward creating a more inclusive campus. 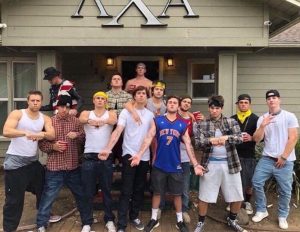 The photo shows Lambda Chi members in front of their fraternity house, dressed differently than they expressed in a press release apologizing for the blackface incident. The photo also shows agricultural systems management junior Ryan Vierra, pictured next to Watkins in the original photo.

The photo was captioned “She want a gangster not a pretty boy.” The account has since been deleted.

University spokesperson Matt Lazier has not returned requests for comment.

Nationwide, fraternities have sparked outrage for racially insensitive behavior. Some fraternities have been suspended and disbanded over blackface incidences. In 2013, Phi Sigma Kappa held a ‘Colonial Bros and Nava-Hos’ themed party, which gained widespread attention.

A photo of agricultural business senior and Lambda Chi Alpha member Kyler Watkins in blackface has been circulating social media.

Historically, blackface derives from white actors painting their faces black to depict slaves and freed black people onstage during minstrel shows that started in the mid- to late-nineteenth century and lasted well into the 1950s. The practice created caricatures of black people, mocking and dehumanizing the community and perpetuating racist stereotypes since. Recently, an Atlanta school came under fire after schoolchildren performed a poem for Black History Month while wearing blackface masks.

According to Lambda Chi President Logan Boersma, the photo was taken at a Lambda Chi brotherhood event this past weekend. Boersma said the blackface was not racially motivated.

“We had a brotherhood event, big bros and little bros and families,” Boersma said. “Each of us had a team based on your family, you can pick whatever theme you want. One color chosen was black and that is why the person’s face was colored.”

According to university spokesperson Matt Lazier, Cal Poly is investigating the post and the fraternity event.

“The university finds it deplorable any acts that would seek to hurt, offend, intimidate or frighten any member of our campus community. The university is aware of the posting and is investigating the matter at this time,” Lazier said in a message to Mustang News.

Lambda Chi member and agricultural systems management sophomore Ryan Vierra, pictured on the right in the photo, declined to comment.

This story will be updated as more information becomes available.

Correction: A previous version of this article said Ryan Vierra was a junior. It has been changed.