Jeremy Fleming is applying to Cal Poly for the third time as a transfer student from Cuesta College.

The directors in the admissions department and the dean of the college of engineering know his name by now, he said.

He is disappointed that he hasn’t got in before, but he keeps trying.

“It’s not really discouraging; it’s disappointing to an extent, but it just makes me feel like, ‘OK, I need to do better,’” Fleming said.

Fleming continues to apply to Cal Poly every year because it has one of the best engineering programs in the nation.

If he is not accepted, he will appeal the admissions decision within 10 days, he said.

Cal Poly was once a small agriculture and technical school. In 1992, only 7,744 prospective students applied to the university. Today, more than 40,000 students fight for an acceptance letter.

Cal Poly is more difficult to get into now than years before, but still, more students apply every year — many more than the university can accommodate.

California’s growing population is one factor contributing to the overflowing amount of applications received by admissions every year. California is the most populated state in the U.S. with more than 38 million residents.

In addition to the population increase, financial aid has become more accessible to students over the last 20 years, according to Colleen Martin, the College and Career Center Specialist at San Luis Obispo High School.

With more financial aid available through the state, more students have the opportunity to attend college.

When Martin went to college for the first time in 1978, it wasn’t expected that every high school student would do the same.

“If you didn’t have the money, you didn’t go,” Martin said. “And now with the FASFA and the Cal Grant, a family of four can make up to $85,000 and get tuition picked up.”

Between 2000 and 2010, college enrollment increased 37 percent, according to the National Center for Educational Statistics.

“It’s more competitive because more kids are going to college,” Martin said. “All the high schools are pushing, ‘Everyone needs to go to college.’”

“Parents are pushing for higher education, so you have a greater freshman class that’s going to be applying,” Fleming said.

And according to Associate Vice Provost of Marketing and Enrollment Development James Maraviglia, parents are more involved in their children’s education.

“A lot of parents understand that college is only going to help you in your future,” he said.

As students feel the pressure from parents and peers, they spread their choices.

More students are applying to a larger number of schools, according to a study by the National Association for College Admission Counseling (NACAC).

One-quarter of freshmen who enrolled in college in Fall 2010 applied to seven or more schools, the study found, leading to overloaded applicant pools for admissions offices.

“Kids feel that competitiveness and hear of other students getting in who were ‘so good’ and whatnot so they start feeding that frenzy of, ‘I better apply a lot of places, that way I’ll know I have something,’” Martin said.

This begs the age-old chicken-or-the-egg question: Are high schoolers working harder for a higher GPA, or is the university selecting higher-caliber students than years past?

Martin believes GPA may be rising because high schools are handing out better grades to students, she said.

“There is a lot of grade inflation going on in all high schools,” she said. “It used to be — when I was in high school — when you take a class, two or three students got an A, where now everyone expects A’s.”

But Maraviglia said grade inflation is not affecting admissions standards.

“The GPA is going up the same time the average test scores are going up,” he said. “The academic profile is stronger.” 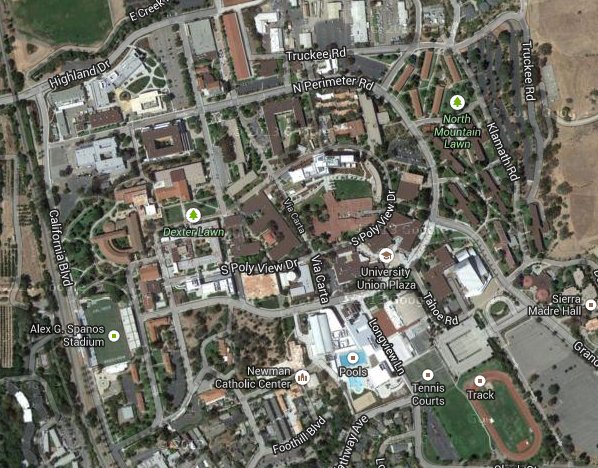 Admissions looks at factors other than GPA: test scores, extracurricular activities and the overall strength of a student’s high school career, he said.

Cal Poly’s growing reputation as a competitive school has enticed more students to apply to the university every year, Maraviglia said. Cal Poly is better known today than it was 20 years ago, he said.

“The Cal Poly experience, the Learn By Doing, what students readily gain from doing well in the workplace, in graduate school, in job and career satisfaction, has escalated the idea that Cal Poly is a great place to go to school,” Maraviglia said.

Martin, Maraviglia and Fleming all said the Learn By Doing philosophy and occupation-driven majors are an attractive quality to prospective students.

“The kids are well-prepared for a specific occupation, which is great, especially post-recession,” Martin said.

Considering the high tuition cost of Cal Poly’s competitors, Cal Poly is considered to have “more bang for your buck.” Affordable Colleges Online ranked the university No. 7 of the nation’s most affordable colleges with the highest return on investment.

“It’s such a bargain,” Martin said.

Whether it’s trends in the population, economy or Cal Poly’s prestige, thousands of applicants will continue to file in every year.

“This is a gem, and it’s a heck of an opportunity,” Maraviglia said.