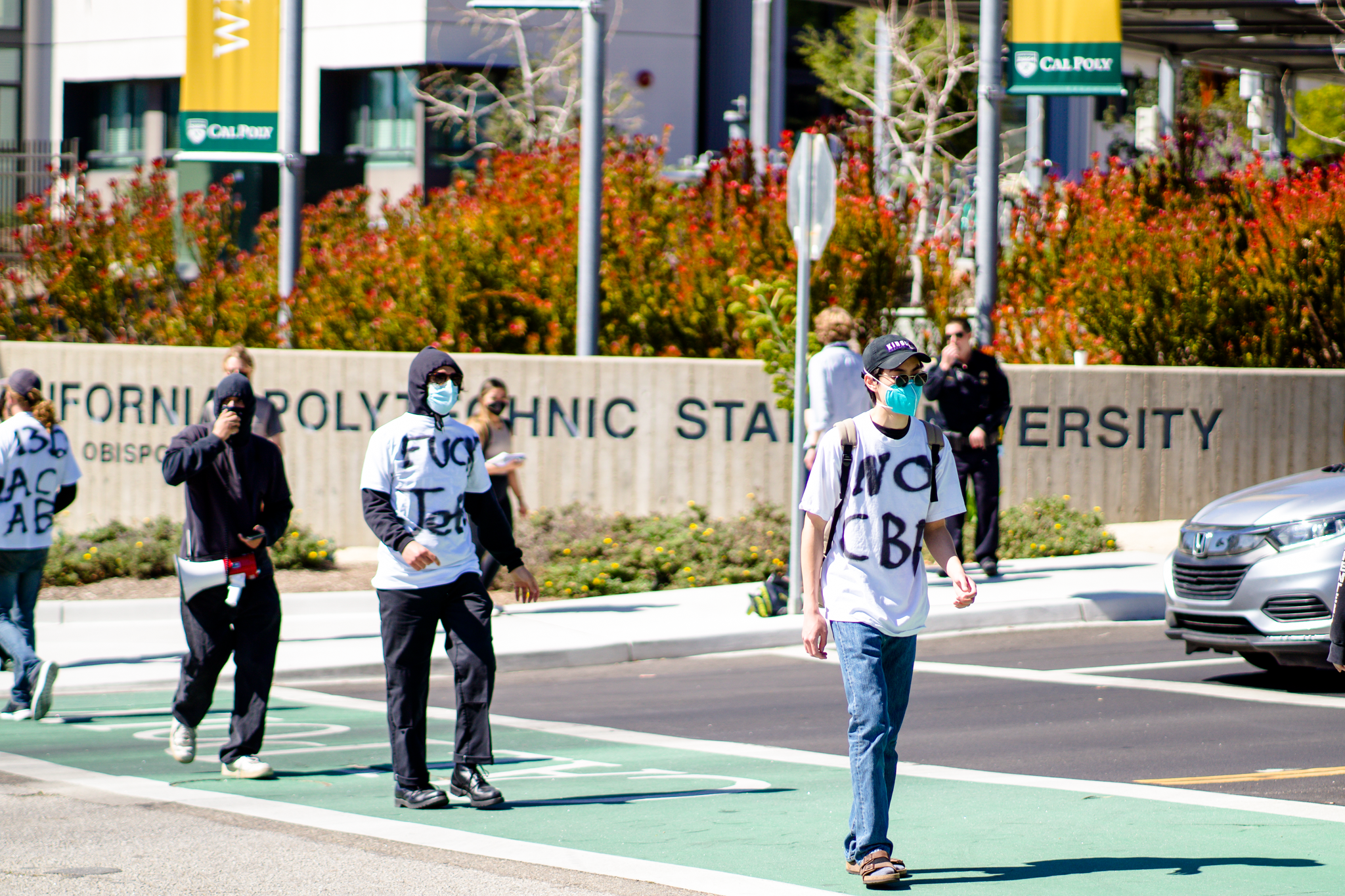 Several students blocked traffic at the intersection near yakʔitʸutʸu residence halls on Thursday afternoon during a protest against Cal Poly President Jeffrey Armstrong’s approval of the College Based Fee proposal.

Members of Students for Quality Education and Abolitionist Action Central Coast/San Luis Obispo organized the demonstration, which was part of a weeklong call to action in opposition to the fee increase. Their call to action includes a petition against the College Based Fee, among other initiatives.

Students started the protest at 11 a.m. at the yakʔitʸutʸu lawn outside of the Native American and Indigenous Cultural Center. From there, they marched throughout campus, culminating in them obstructing traffic shortly after 12:30 p.m. on Grand Avenue and Slack Street.

Until 1:30 p.m., protesters repeatedly shouted, “Don’t raise our fees; instead, cut Jeff’s salary” and “Cal Poly admin, hear us rise; lower our fees so we can thrive,” among other chants. The students walked back and forth across the street, angering drivers who honked repeatedly and yelled at the protesters for blocking the intersection.

“It is annoying. It is disruptive and that’s the point,” one of the protesters, who declined to give her name out of concern for retaliation as a student, said. “If you’re loud and annoying enough about it, hopefully, they’ll listen to you.”

Cal Poly and San Luis Obispo police officers responded to the scene after receiving “multiple” reports of traffic delays, according to one of the officers at the protest. Some officers helped conduct traffic and tried talking to protesters, while other officers remained on standby.

Two peace ambassadors with the Cal Poly Office of the Dean of Students also came to the demonstration to ensure the students were safe during their interactions with the police.

One of the student protesters, who declined to give his name out of concern for losing an internship opportunity, told Mustang News he would have liked to see a campuswide referendum detailing the pros and cons of the College Based Fees prior to Armstrong’s approval.

“For example, in the ballot measures you receive in the mail during elections, there’s an argument for and an argument against [each measure],” he said. “That was not provided for the College Based Fee proposal.”

Another protester, who did not want to be named due to concerns of job loss, said he feels frustrated with the administration’s lack of transparency and wants to advocate for future students from underrepresented backgrounds.

“Ultimately, we just want to see what’s best for the greatest number of Cal Poly students,” he said. “We won’t take increased financial aid for some when it comes at such a huge cost to undocumented students and makes the international and out-of-state student population less diverse.”

The College Based Fee proposal, which Armstrong approved on March 7, would make the fee increases mandatory for all students starting enrollment in Fall 2022. This means the change will not impact current students, according to a campus-wide email from Armstrong.

The fee increase varies depending on the college in which a student is enrolled. For example, students whose major is housed in the College of Engineering (CENG), College of Agriculture, Food and Environmental Sciences (CAFES) and College of Architecture and Environmental Design (CAED) will be required to pay a net increase of $3,591 from 2022 to 2027.

Armstrong wrote in the email announcing his approval that the College Based Fee proposal helps solve two challenges Cal Poly is facing: making the university more affordable for low- and middle-income in-state students and bolstering the university’s efforts to make the student population more diverse.

“The consultation process has been a good reminder for everyone that Cal Poly can dream big dreams, can have robust discussion and debate about both ends and means for achieving those dreams, and can take bold action after due consideration,” Armstrong stated.

According to Armstrong, 60% of the revenue generated by the College Based Fee increase will provide financial aid and scholarships through the first four years of a student’s enrollment. The remainder will go toward “the academic mission in support of teaching, scholarship and service in a Learn by Doing environment.”

However, students at the protest told Mustang News that the allocation of the remaining 40% is “too vague.” In other words, they said it is unclear what the “academic mission” constitutes.

“[Armstrong] says it’s for ‘diversity and equity,’ whatever that means,” one of the protesters said. “There are no guidelines. There is no transparency.”

“We absolutely believe there should be an increase in financial aid, but they shouldn’t make us pay for it,” another student said. “There are plenty of pots of money that they could dip into.”

The authorization of the proposal comes nearly four years after Armstrong’s salary was increased to $429,915, sparking anger among many Cal Poly students. This salary raise made Armstrong the third-highest paid executive in the entire California State University system.

Correction March 12: This article was updated to reflect that yakʔitʸutʸu is lowercase.