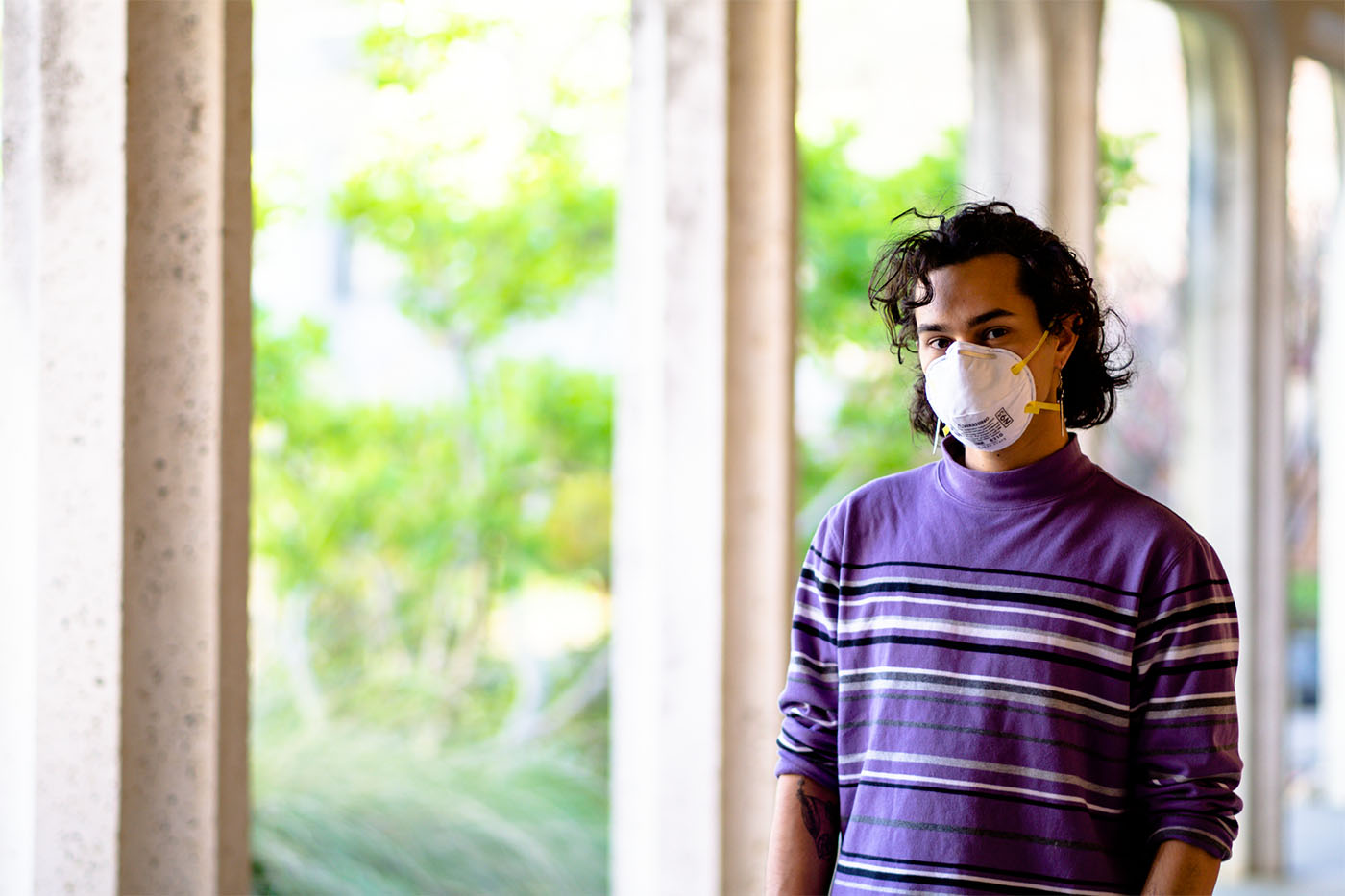 M.W. Kaplan dreads thinking about an in-person communications theory class they are enrolled in at Cal Poly next quarter.

Kaplan, a communication studies junior, said they need to take the class to graduate — but with the university lifting the indoor mask mandate across campus starting in the spring, Kaplan is not comfortable going to class in-person.

Their immune system is weakened due to medication they have to take, so Kaplan is at high risk of severe health complications if they get COVID-19. They said pulling back the mask mandate makes it seem like university administrators do not care about immunocompromised community members.

“No one who’s high risk wants that to be happening,” Kaplan told Mustang News.

In an email to students on Feb. 24, President Jeffrey Armstrong announced fully-vaccinated students would not be required to wear a mask in all indoor settings starting in the spring quarter, including classrooms and labs. Cal Poly will not be verifying whether students are vaccinated before they enter facilities — effectively opening the door to anyone, regardless of vaccination status, to stop wearing a mask indoors.

The decision has left countless immunocompromised students, faculty and staff feeling ignored and abandoned. Mustang News spoke with several immunocompromised community members who said administrators are turning their back on the most vulnerable members of the Cal Poly community by lifting the mask mandate.

Lazier added that the Disability Resource Center (DRC) and Office of Student Affairs is consulted on COVID-19 plans broadly. Debi Hill, the director of the DRC, did not respond to emails from Mustang News seeking to confirm whether she was involved in the decision to lift the mask mandate.

“I don’t understand why Cal Poly administration is in such a hurry to drop the mask mandate.  What’s the rush?” Call wrote in an email to Mustang News. “It’s likely that for many faculty members, this will affect their decision to offer in-person classes in Spring.”

While Lazier said university administrators seek input from a variety of individuals on COVID-19 plans, he could not provide examples of Cal Poly administrators consulting student clubs or committees that serve immunocompromised students — not only for the decision to lift the mask mandate but on any COVID-19 plans developed during the pandemic.

Kaplan, who is the president of the Cal Poly Disability Alliance club, said their student organization was not contacted for any input on lifting the mask mandate. While it’s disheartening that university officials didn’t seek out immunocompromised students’ input, Kaplan said it’s not surprising.

“They clearly didn’t want that advice, so I can see why they wouldn’t ask for it,” Kaplan said. “They wouldn’t have followed it anyway.”

Do officials care about immunocompromised people?

Borenstein said not dropping the county’s indoor mask mandate after Gov. Gavin Newsom dropped his statewide indoor mask mandate would have caused confusion. Declining COVID-19 cases in San Luis Obispo County and a decreasing appetite for indoor masking within the community were other factors that played into that decision, she added.

Borenstein clarified her relationship with Cal Poly is merely one in which officials confirm with her whether policies are legal or reasonable.

Borenstein has not made a recommendation to Cal Poly officials to specifically seek input from immunocompromised community members, she said.

“I’ve been saying all along that most important in our collective response to this pandemic, to this virus, is to make sure that we take care of the most vulnerable among us,” Borenstein said.

Immunocompromised community members do not think Cal Poly administrators have their health in mind when Cal Poly’s COVID-19 policies put them at risk.

Reina Knowles, a nutrition sophomore who lives on campus, was on medication that suppressed her immune system last year. While she is no longer immunocompromised, she got COVID-19 in January at Cal Poly and said she has been experiencing post-COVID-19 symptoms on top of having a chronic illness.

Knowles, who is also the treasurer of the Cal Poly Disability Alliance, said Cal Poly’s COVID-19 policies are reflective of ableism in systemically marginalizing people who are immunocompromised and excluding them from public health decisions. She said that if administrators care about people with weakened immune systems during a pandemic, they need to prove it in their policies.

Lifting the mask mandate is “callous and risky,” Knowles said. She is currently questioning whether to enroll in classes at Cal Poly next quarter. Cal Poly is not a safe environment for students who are immunocompromised or on medication that suppresses their immune system, Knowles said.

“I’ve already begun warning people with health issues not to apply to Cal Poly or accept and attend,” Knowles said. “I hope that anyone looking at applying to Cal Poly that has an autoimmune disease takes that into account — that they might be safer somewhere else.”

Back in January, Cal Poly was the only California public university to reopen its campus to in-person class three days into the New Year. The university allowed students who had not yet confirmed negative COVID-19 tests to attend classes.

That week, Cal Poly experienced its largest spike in COVID-19 cases ever, ran out of on-campus isolation beds and spent more than $100,000 isolating COVID-positive students off-campus — either by sending them home or putting them in local hotels.

Despite the Omicron-induced COVID-19 spike, Armstrong rejected the demands of a faculty-led petition with over 3,500 signatures, which called for more flexibility for classes to be held virtually.

At a Jan. 11 Academic Senate meeting, Armstrong said he “can’t make decisions based on petitions or anxiety.”

Immunocompromised community members who spoke with Mustang News said they were deeply hurt and offended by those comments. Faculty and staff who said they could face repercussions or impacts to their career at Cal Poly are being kept anonymous.

One Cal Poly staff member — who is immunocompromised and lives with family who is at high risk of complications due to COVID-19 — said Armstrong’s comments in January were offensive to immunocompromised people by dismissing their very real illness and high risk as “some irrational fear.”

The Cal Poly staff member is considering leaving Cal Poly after hearing that the mask mandate would be lifted for the spring quarter.

“I’m so unsafe on campus and I don’t trust the administration anymore,” the Cal Poly staff member told Mustang News. “I’ll have to go at some point so I’d rather sooner than later when things get much worse.”

Another employee at Cal Poly, a faculty member, lives with immunocompromised family members at home and said the mask mandate being dropped for spring quarter is another example of President Armstrong’s stubbornly relaxed COVID-19 policies.

“Regardless of what the community wants, regardless of apparently what the rest of the CSUs are doing, he’s going to do what he wants,” the faculty member said, who hopes to be able to work from home next quarter.

With a majority of classes remaining in-person, immunocompromised students are having to convince their professors and peers that their health and safety are not something to be taken lightly.

Graphic communications senior Mia Lew found herself in a similar situation in January. Lew, who is immunocompromised and works on campus, was denied virtual accommodations for one of her classes at the beginning of winter quarter. Despite an overwhelming number of students contracting COVID-19, Lew was forced to attend the class normally.

Her only other option was to drop the class and delay her graduation.

“I don’t think it should be my job to be begging for a professor’s understanding,” Lew said. “I’m literally just trying to survive and graduate.”

Kaplan, the communication studies junior, is in a similar spot: they need the in-person communications theory class in order to graduate and Kaplan worries that if they don’t take the class next quarter, it could delay graduation.

Kaplan is not sure if they can afford that and said it feels like they have to decide between their own personal safety and graduating on time.

“I’m going to college completely on financial aid and grants, most of which are for four years,” Kaplan said. “So at the end of four years, I would have to pay out of pocket.”

Business administration graduate student Nicole Aichele said it feels like she has to constantly remind people that she is immunocompromised, something invisible. When Aichele finds herself in situations on campus that make her uncomfortable she said that she’s likely to speak up.

“It definitely causes some friction or it’s difficult to connect with people when everyone has a different level of comfortability,” Aichele said. “To me, it’s very much the elephant in the room where I’m like ‘Is anybody else seeing this? Is anybody else uncomfortable? Because this is super obvious to me.’”

In addition to showing little concern for immunocompromised students’ physical wellbeing, Cal Poly administrators have also been dismissive of larger mental health concerns that arise from the stress caused by a pandemic, students said

“To hear that Armstrong doesn’t care about people’s anxieties is really frustrating because it’s been running my life for the past two years,” Lew said.

Aichele has observed that the university consistently skews towards those who have very few concerns when making its pandemic policy.

“I don’t think that Cal Poly has made much of an effort throughout the entire pandemic to mitigate stress,” Aichele said. “I think that they’re more concerned with mitigating risk.”

While Kaplan figures out what they are going to do next quarter, concerned over being high risk and going to in-person class, Cal Poly’s COVID-19 policies have already put a dampener on activities they participate in.

During much of the pandemic, Kaplan said they frequented the Recreation Center — with a mask and face shield — for a yoga class three times a week.

“It was great for stress and just for being more focused and more grounded,” Kaplan said. “It also helps with a lot of my physical symptoms because I normally can’t do a lot of strenuous exercise.”

On Feb. 18, Armstrong announced via email that masks would not be required in campus facilities including the Recreation Center, Campus Dining, the Performing Arts Center and Kennedy Library.

Kaplan won’t be attending yoga classes at the Recreation Center anymore. They said it’s just not worth the risk.

This story comes from The Hill, a team of data analysts and reporters focused on data-driven and investigative stories at Mustang News. Click here to read more stories from The Hill.