Cal Poly’s Pride Crosswalk on campus was wiped away over the break in preparation for a more durable paint job coming later this school year.

The Cal Poly Pride Center and Associated Students Inc. (ASI) painted a rainbow crosswalk on Mustang Way in 2020 in recognition of the university’s LGBTQ+ community.

The university said in a March 2020 news release that the crosswalk is intended to “provide students, faculty, staff, visitors, and supporters a sense of place and community when they enter campus.”

The crosswalk was initially going to be painted for two years as a pilot program, in addition to other initiatives from the Pride Center. Now, a thermal plastic coating will be added to the new paint job to prevent wearing, as recommended by the University Union Advisory Board. 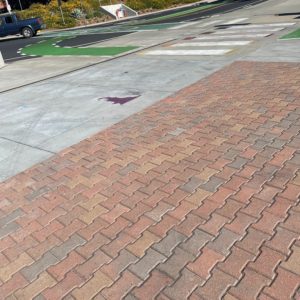 The crosswalk’s repainting will be held off until the fire sprinkler system in the UU is replaced beginning this December. University Spokesperson Matt Lazier said that it could take a few months for the sprinkler project to be completed.

“Afterward, though, the improved crosswalk will be much sturdier and resistant to wear and tear,” Lazier said.

The pride crosswalk was one of several ideas brought forward by former Lead Coordinator for Campus LGBTQ+ Initiatives Samuel Byrd, who had seen pride crosswalks in other cities and universities as a way of showing allyship and community. Byrd recently accepted a position as Director of LGBTQ Resources at Yale University, but not before focusing on other goals — including strengthening the Pride Center’s coalition with other organizations, expanding Housing’s Pride Residential Learning Communities and offering more leadership opportunities for LGBTQ+ students.