San Luis Obispo became the first city in the world to successfully ban smoking in public places in 1990. While Cal Poly has yet to weigh in on either a 100 percent smoking ban or a 100 percent tobacco ban, some universities have already adopted such policies, and the California State University system could be joining them.

Chancellors at all University of California (UC) campuses plan to implement a 100 percent tobacco ban by 2014 in an attempt to cut tobacco use and exposure to secondhand smoke, according to an official press release from the UC’s Office of the President issued in 2012.

Now, the California State University (CSU) is considering banning smoking from its campuses as well.

The right to smoke will never supersede the right to breathe clean air.

“It is the (CSU) chancellor’s intention to institute a system-wide ban on the use and sale of tobacco products on CSU campuses,” Mike Uhlenkamp, director of public affairs for the CSU chancellor’s office, said. “We are in the process of putting together a task force that would review the creation and implementation of the plan, and are currently consulting with campus leadership on the best way to accomplish this.” 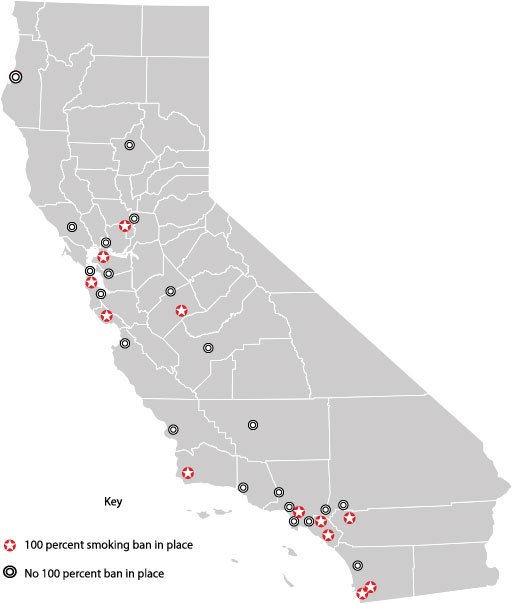 Universities that implemented the tobacco ban have also banned electronic cigarettes. Though these are not tobacco products, they contain nicotine, a substance found in tobacco.

As an entity of San Luis Obispo, Cal Poly’s current smoking policy is discretionary. Smoking is only allowed in private residences, designated areas on campus and 20 feet from any building outside the campus core.

But Colombini said campus rules must be followed if a mandate goes into effect.

“If this is a campus-wide mandate, though, then that’s what you have to follow,” he said. “It’s one of those things where you need to pick your battles.”

Colombini said he will work with Cal Poly President Jeffrey Armstrong and the chancellor’s office to plan both short-term and long-term changes Cal Poly needs to go through to prepare for the ban.

Colombini and his executive cabinet conducted a survey titled “Let Your Voice Be Heard” in November 2013 to examine Cal Poly students’ opinions on campus-related issues, including a smoke-free campus.

Out of 4,006 responses, 53.5 percent of students said they strongly agree, and 23.1 percent agreed Cal Poly should be a smoke-free campus with minimal designated smoking areas.

“That question was the highest-supported question on the survey,” said Nicole Billington, an ASI executive cabinet member. “So for now, we can really tell that there is a strong desire by students to, at least — as the question says — have a smoke-free campus with minimal designated smoking zones.”

Although the potential tobacco ban seems to work against smokers, Theresa Fagouri, a health educator at the Peers Understanding Listening Supporting Educating (PULSE), said she sees it in a different light.

“To put policy in place which makes it more difficult to facilitate an addiction, really makes it easier for the person to quit,” she said. “What (we’re) really doing is helping. We’re going to save you from yourself.”

Fagouri said she used to work at the American Lung Association of California in Chico and helped change the smoking policy there.

Newly hired in September 2013, Fagouri will be the tobacco ban point person, who will provide smokers with eight-week behavior-change classes if the policy is implemented at Cal Poly, she said.

Fagouri does not support using electronic cigarettes as a substitute, because “it’s a myth to think they’re safe.”

“(Electronic cigarettes are) just facilitating the addiction,” she said. “I think as health educators, what we want to do is to help break addictions and to have people not needing something besides food, water and air in their lives.”

Besides negatively affecting smokers, cigarette smoke can be detrimental to non-smokers as well. Fagouri said when a person with a disease such as lupus or asthma is exposed to cigarette smoke, it can worsen his or her condition.

“The right to smoke will never supersede the right to breathe clean air,” she said.

Though the ASI survey indicated the majority of Cal Poly students would prefer a smoke-free campus, the university is clouded with stereotypes surrounding tobacco use in agriculture and baseball.

Baseball head coach Larry Lee, however, said the NCAA bans the use of any type of tobacco during practices and games.

“It’s been illegal to chew tobacco during a baseball practice, game, travel for many years,” Lee said. “Our players do not chew tobacco when they’re involved in baseball.”

Lee said chewing tobacco is not healthy, and he supports the ban.

Hidden behind bushes and bike racks, the designated smoking area next to the Robert E. Kennedy Library attracts smokers of different demographics.

Business administration junior Naoyuki Ohta said he smokes five cigarettes a day, and has been smoking since he was 19. Still, he said, he would obey the ban if it’s implemented.

“It’s hard for me because sometimes (when) I want to smoke — if they ban smoking everywhere on campus — I’ll have to go somewhere else off campus,” he said.

Ohta added he thinks many people will break the mandate.

Overhearing Ohta’s conversation about the potential ban, smokers standing around showed displeasure. One referred to the ban as discrimination against smokers.

“No. Just no,” a nearby smoker immediately responded to the potential ban, letting out a laugh. He asked that his name not be printed.

“I’ll still smoke on campus,” he said with a cigarette in one hand. “Like right now, I don’t smoke in front of people walking around,” he turned his head to glance at people passing by the area, “but I’ll go to an area where there’s no one really standing, and then smoke.”

If the tobacco ban takes effect — probably not this year — smokers will be left with three choices: going to a health educator for help, going off campus between classes to smoke and smoking under the radar, despite the ban.