There are a few things industrial engineering senior Catherine Cichasky will never forget about her Week of Welcome (WOW) experience in 2011 — an abundance of parties, herds of students wandering Hathway Avenue and the red cups that littered the street.

But things have changed since then.

“This year, Hathway (Avenue) was very quiet compared to other years,” Cichasky said. “There were a lot of cops out and no parties.”

Due to several changes to this year’s WOW in terms of the program’s policy and city laws, Cal Poly’s class of 2019 may have different, less party-related memories than past WOW classes.

This year’s WOW class came to San Luis Obispo 10 days before school started as part of a revamped WOW program that, among other things, made attendance mandatory, had daily participation until as late as midnight and made off-campus partying more difficult.

With more than 5,300 students participating, 2015 marked the first year that WOW was required for all incoming freshmen.

According to an email sent out by Provost Kathleen Enz Finken and Vice President for Student Affairs Keith Humphrey last December, the university’s reason was to connect new students to the campus’ key resources earlier.

WOW cost $200 per student this year, but according to an interview in January with Mustang News, Director of New Student and Transition Programs Andrene Kaiwi-Lenting said there would be more financial aid opportunities for those who could not afford the program.

“The commitment is to make it all accessible because it’s a really great set of programs to participate in,” Kaiwi-Lenting said in the January interview.

Though the orientation program itself was mandatory, students were not penalized if they did not go to WOW activities — kayaking in Morro Bay, silent discos on campus, etc.

“It was mandatory to attend and sign-up (for WOW). As far as taking role and keeping track, to a point we stopped being so strict about it,” Kaiwi-Lenting said in a recent interview with Mustang News.

There were mixed feelings about the decision to make WOW mandatory, but environmental engineering senior Denise Man felt it was a good choice overall.

Though WOW activities were not mandatory, many WOWies decided to stick out the whole day with their WOW leaders.

“The whole day” meant 8 a.m. until as late as midnight, the latest time WOW leaders were allowed to keep their WOWies.

“It was fun until we had to wake up at 8 a.m. every morning, and then stay with them until 1 in the morning. That was probably the worst part,” agricultural business freshman Klara Gera said.

To freshmen like Gera, this seemed like a way for WOW leaders to keep students from going out and socializing.

“We program late on Friday and Saturday nights because one of the priorities we had was to have enough activities that engaged students on campus that kept them, frankly, from wandering the streets,” Kaiwi-Lenting said.

The plan worked, Gera said. Few freshmen went out to party at night.

“My siblings told me that you could go out at night and it was just crazy… people all over the street, super fun, and I felt like I didn’t get to experience that because there weren’t that many people out,” Gera said. 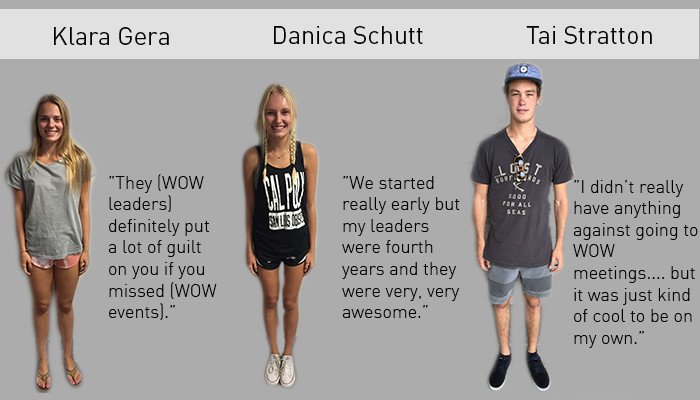 Off-campus partying and the laws that prevented it

WOWies weren’t the only ones who experienced change during WOW. Change also came to students who lived in the neighborhoods close to Cal Poly, mostly in regard to partying.

These changes came in the form of two amendments to the current city code this past summer, allowing the following:

Similar party-restricting laws have been enacted over the last few years.

San Luis Obispo Vice Mayor John Ashbaugh was part of the committee who sat in on these decisions and understood both the criticism and support for the new amendments, especially the one affecting unruly gatherings laws.

“I’d rather focus on how to incentivize people to have a ‘ruly’ gathering,”Ashbaugh said. “I don’t necessarily want to see more fines being levied; I want to see people be able to have a good time.”

On top of these summer changes, there were double fines implemented for unruly gatherings, noise violations, open container and urinating in public the week before and during WOW.

The changes to WOW — mandatory attendance, long days and anti-party laws and fines — have had mixed effects on traditional WOW culture, mostly characterized by parties and relatively high emergency calls and citation handouts.

Despite strong enforcement of rules and increased fines, students still found ways to let off steam leading up to and during WOW. In fact, according to the San Luis Obispo Police Department, the number of public intoxication citations during the week before and during WOW went up this year — from 47 in 2014 to 51 in 2015. Additionally, the number of DUIs nearly doubled —  from 16 in 2014 to 31 in 2015.

“This is where we get into the unintended consequences. We need to evaluate the effects of these changes to see if we are in fact creating more risky situations,” Ashbaugh said about these increases.

However, some numbers went down, such as minor in possession and open container citations. Also , Sierra Vista Regional Medical Hospital — the closest hospital to campus — admitted 12 people for acute alcohol poisoning during WOW, a 50 percent decrease from last year according to Regional Medical Center Spokesperson Ron Yukelson.

“A lot of good is coming from time spent with our students in WOW, but is WOW the only method for orienting students?” Kawai-Lenting said.