Through the duration of the pandemic, major spikes in cases at Cal Poly occurred after two major holidays: Halloween and New Year’s Eve, according to statistics from Cal Poly’s COVID-19 dashboard. Now after dozens of Cal Poly students were seen gathering at St. Patrick’s day parties, students are wondering if another spike is in the future.

After months of Cal Poly’s COVID-19 dashboard not displaying clear and consistent metrics, the dashboard has now been remodeled to include all testing statistics since June. This only includes students that have been tested through Cal Poly’s ongoing testing program, thus not reflecting the entire student body. 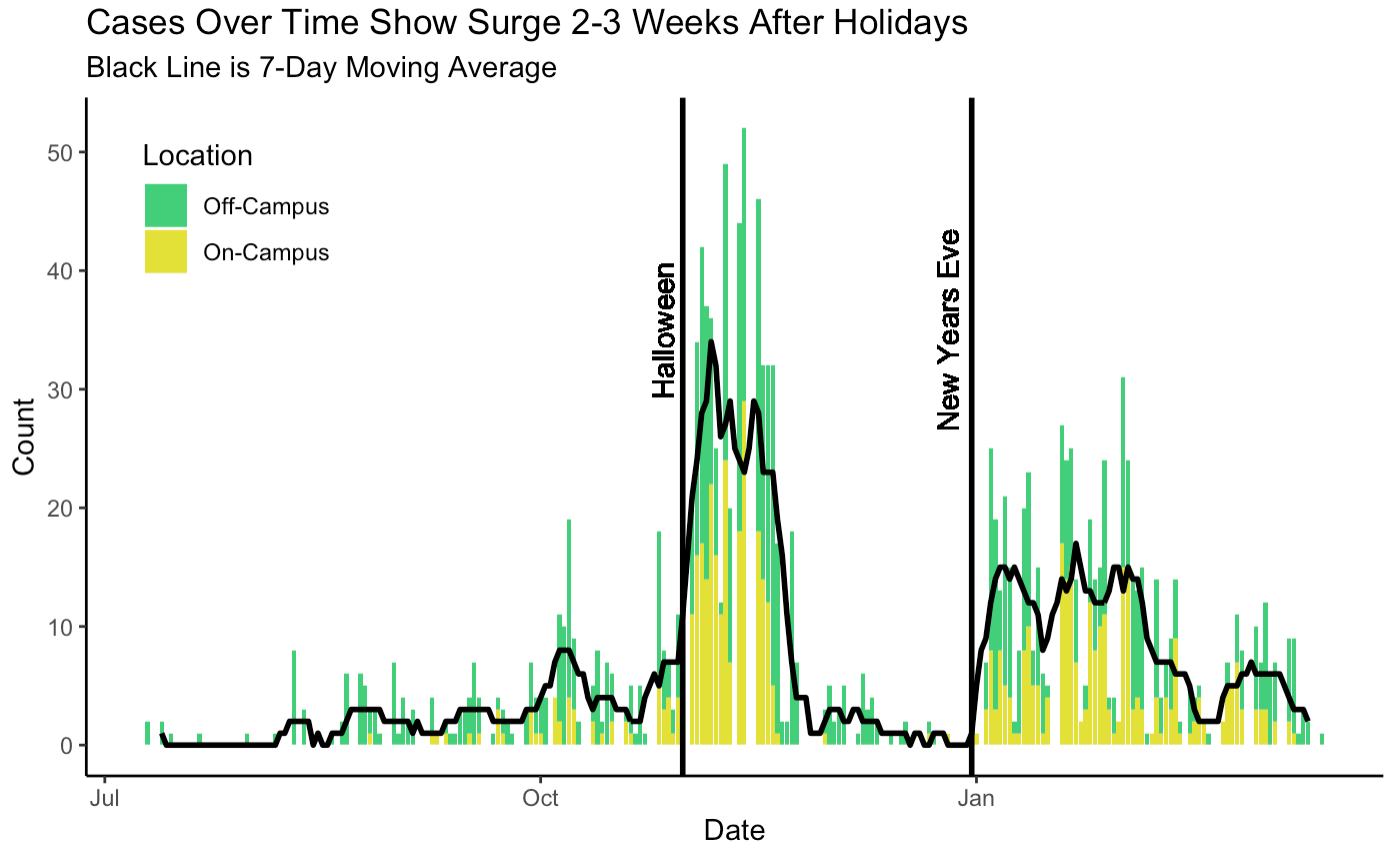 These averages are relatively consistent with San Luis Obispo County’s spikes, with the addition of surges after Thanksgiving and Christmas. Cal Poly experienced a decrease in positivity rates after these two holidays, most likely due to the correlation to Thanksgiving and winter break and thus a decrease of students in the community.

Another difference in the data is that Cal Poly’s largest spike followed Halloween, whereas the county’s largest spike followed New Year’s Eve. The county reached its spike post-New Year’s Eve on Jan. 5 with 611 new positive cases in one day. The highest positive cases in a single day following Halloween was just 128, which is lower than the county’s daily spikes following any holiday after Halloween.

But with large gatherings of students celebrating St. Patrick’s Day, students have expressed anger at the actions of their peers and are anticipating another spike to occur after the holiday.

Business administration sophomore Advaitha Bhavanasi said that the people who attended the parties on St. Patrick’s Day were “selfish.” She said she’s anticipating another outbreak to occur.

“I wish people understood how much they play a part in spreading [COVID-19] and contributing to the deaths of people from [COVID-19] by not wearing a mask and being so okay with spreading a virus,” Bhavanasi said. “I’m not sure if they haven’t been educated about it or if they just don’t care, which makes me really sad.”

Philosophy freshman Michelle Parsons also said she was concerned about the implications these parties would have on the community at large.

“When the students go out of their bubble of, you know, the people that they live around, the people that they see frequently, and they go into town, they go to the supermarket, they interact with members of the [San Luis Obispo] community,” Parsons said. “If they have been unsafe or if they’re acting unwisely, they impact the health and safety and members of the [San Luis Obispo] community at large.”

As the previous holiday spikes occurred weeks after the event, the repercussions from St. Patrick’s Day may not be prevalent for a while as well.