Opioid overdose deaths down in San Luis Obispo, but the pain remains 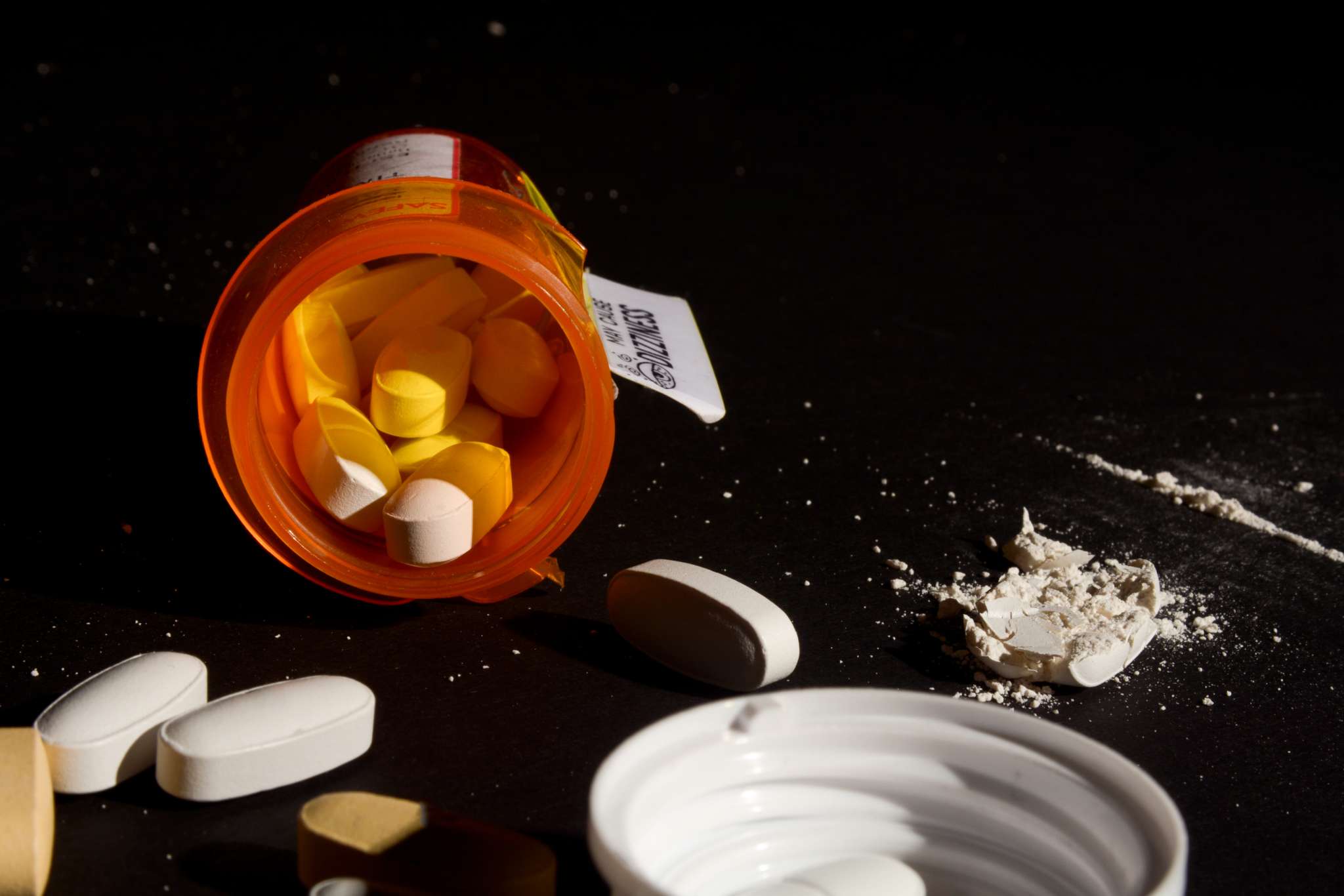 Grover Beach resident Ryan Thole was 6 years old when he walked in on his father injecting heroin in the bathroom. Thirteen years later, Thole shot up for the first time. By the time he was 26 years old, Thole was dependent on the drug, roaming the streets and searching for his next high.

“It was like everything that was wrong about my life, heroin seemed to fix,” Thole said.

With more than 42,000 American opioid deaths in 2016, according to the Center for Disease Control and Prevention (CDC), the opioid crisis has been declared a national emergency by President Donald Trump. There are currently 115 Americans dying every day from an opioid overdose, according to the CDC.

Opioid overdose deaths are down in San Luis Obispo County from their peak in 2016, but the issue remains a national crisis and local public health issue.

Some people dependent on drugs, like Thole was before getting clean, have moved on from prescription pharmaceuticals to heroin due to its low cost and prevalence in San Luis Obispo County.

While the term “opioid” encompasses anything that acts on the brain’s opioid receptors to produce morphine-like effects, the current crisis is rooted in the rise of prescription opioid use. — brand names like OxyContin, Percocet and Vicodin. But before the pills, there was the pain.

The rise of prescription opioids

In 1986, the World Health Organization (WHO) declared that cancer pain could, and more importantly should, be relieved in most patients and encouraged physicians to prescribe opioids for pain management. In the mid-1990s, after multiple national pain-related organizations fought for a change in how pain was treated, the American Pain Society recommended pain be treated as the fifth vital sign.

At that point, physicians were required to give appropriate pain treatment to all patients seeking pain relief. Dr. Ken Starr, a medical doctor specializing in addiction and recovery in Arroyo Grande, explained that if doctors did not efficiently treat pain, patient satisfaction would drop and as well as doctor reimbursements from the government.

Programs like Value-Based Purchasing were implemented to incentivize physicians to provide excellent care for patients. However, in a recent study, 71 percent of doctors said they felt pressure to prescribe opioids and 98 percent said they felt patient satisfaction scores played too large a role in reimbursements.

“There was no real downside for physicians for prescribing. You never got into trouble for overprescribing, only underprescribing,” Starr said.

In 1995, the Food and Drug Administration (FDA) approved Purdue Pharma’s application for OxyContin, its brand name for the semi-synthetic opioid oxycodone. This drug was touted by Purdue Pharma as a more powerful painkiller that only had to be taken twice a day and had little risk for addiction.

However, according to a Los Angeles Times investigation, Purdue Pharma was aware that OxyContin was not effective for 12 hours as advertised and favored stronger dosing over more frequent dosing. Meanwhile, a study conducted by three pharmacists and pain management specialists argued that a 12-hour dose regimen for OxyContin was justified under the FDA’s standards, but an eight-hour regimen may be appropriate for patients experiencing end-of-dose withdrawals. Others like Starr maintain that OxyContin’s dose period still falls below 12 hours.

“For Purdue to come out with a new, novel product that people would pay for, it had to be different,” Starr said.

Starr explained that patients needed more doses per day than Purdue Pharma claimed because the drug lasted closer to eight hours instead of twelve. Patients who were limited to two pills per day often suffered from withdrawal symptoms such as nausea, anxiety and dysphoria. Once the prescription ran out, patients often sought additional ways to combat their pain, according to Starr.

“The price [of prescription opioids] has gone up and accessibility has gone down, so people go to heroin,” Starr said.

For Thole, there were other factors in his life contributing to his drug dependency. It escalated when he got into a car accident and was prescribed Vicodin — a combination of the semi-synthetic opioid hydrocodone and acetaminophin, or Tylenol — for back pain. When the prescription ended, Thole turned to heroin.

As Thole explained, the need for opioids became less about getting high and more about avoiding withdrawal symptoms, or being “dopesick.”

“It doesn’t matter how much you love somebody, your family, your kids or your job,” Thole said. “The fear of getting dopesick is going to take precedence over that.”

While Thole was able to beat his opioid dependence, not all have been as fortunate.

The impact of opioids in San Luis Obispo County

Atascadero resident Ty Graham was 22 years old when he died of an opioid overdose.

“He was smart, he was funny, he was clever, [and] he loved to take things apart,” Graham’s mother, Kim Lacey, said.

“I think along with [ADHD and anxiety] came readiness to use drugs, try drugs,” Lacey said.

Graham made it through his first year at Cuesta College before dropping out and losing his job. Lacey explained that this is when she really saw his drug use escalate.

Eventually, Graham was sent to rehab in Santa Cruz, California. Lacey said she really saw a change in him while he was there.

“It was great … you begin to wonder if the person who used to be there is still in there,” Lacey said. “It was all there and it was coming back.”

In May 2016, Atascadero police paid a visit to Lacey’s home and she knew immediately that the worst had happened. Atascadero police told Lacey and her husband, Dan Graham, that Ty had passed away from an overdose of heroin and methamphetamine. Lacey was stunned.

“It’s like the tails of tsunamis where the ocean rolls back really far, and that’s what it felt like at first,” Lacey said. “And I knew the ocean would roll back in. But there was just sort of a void.”

In San Luis Obispo County, overdose deaths have dropped from 37 in 2016 to 22 in 2017, but opioid prescriptions have not. The following statistics demonstrate the magnitude of the county’s opioid problem:

“Accidental overdoses are now the leading cause of death for Americans under the age of 50,” Grainger said. “In 2016, we had more Americans die from overdose than all the Americans that died in the Vietnam War.”

During a recent visit to New Hampshire, President Trump addressed his plans to combat the opioid crisis. The centerpiece of his address focused on cracking down on drug dealers.

“If we don’t get tough on drug dealers, we’re wasting our time,” Trump said. “That toughness includes the death penalty.”

Grainger sees a different approach to the crisis.

Thole agreed with Grainger, emphasizing that people dependent on opioids are humans.

“They don’t see people. They see trash,” Thole said. “I’m a dad, you know what I mean? I am the way I am because my heart was broken, because my kids were taken from me, because my wife divorced me. Everything that happened along the way just hurt me that much more to, ‘Why stop now? I’m in too much pain to stop.’ Change their perception and there might be a chance for change.”

How San Luis Obispo is fighting back

The SLO Opioid Safety Coalition was formed in 2016 and aims to address the problem of opioid addiction and raise awareness of treatment options throughout the county.

Candace Winstead, coalition member and Cal Poly biological sciences associate professor, talked about how being part of the coalition has allowed her to learn and engage with more people in conversations about opioids.

“I’m really excited to be a part of the Opioid Safety Coalition and all of the people that are working on these different action teams towards the same goal,” Winstead said.

In addition to her involvement in the coalition, Winstead volunteers with the San Luis Obispo Syringe Exchange, providing program evaluation and overseeing student research.

The needle exchange operates Wednesdays between 5:30 p.m. and 8:30 p.m. in the parking lot of San Luis Obispo County’s Public Health Department. In addition to its other core services, the exchange is supplied with the opioid-overdose-reversing drug naloxone.

Last August, the exchange received a state grant of $27,500 to stock 686 doses of Narcan — the brand name for naloxone — nasal spray.

Grainger explained that once Narcan is administered to someone suffering from an opioid overdose, it competitively binds to the opioid receptors in the brain, but does not activate them. Overdose symptoms will lessen within minutes as the drug prevents the body from responding to other opioids.

“At the syringe exchange, they reported 75 reversals just in the last six months,” Grainger said.

Those reversals, combined with other efforts, may be having an impact. San Luis Obispo County saw a significant drop in the number of opioid-overdose related deaths in 2017. However, there is currently not enough evidence to prove that SLO Bangers’ Narcan supply alone directly caused the drop in county-wide deaths.

“When I talk to people, I say it’s like having a fire extinguisher at the house. You know, I have a fire extinguisher at the house. I’m not an arsonist. I don’t plan on having a fire at this house, but if I do, I want to be safe,” Grainger said. “It’s the same thing with Narcan …  I want to make sure the people I know are safe, so I have a Narcan kit at my house.”

Narcan kits are in stock at certain pharmacies and local wellness centers and have also been available for customers at the Syringe Exchange since 2015. The most recent shipment of Narcan nasal spray from the state grant arrived this past November, Winstead said.

A part of Winstead’s team’s current research involves testing the local drug supply for the presence of fentanyl.

According to the CDC, fentanyl is a synthetic opioid 50 times as strong as heroin. Overdose deaths from fentanyl almost tripled from 2015 to 2016 nationally.

“Fentanyl is a huge problem, especially in the East Coast, and a lot of overdose deaths and amplifying of the opioid crisis has been because of the essentially poisoning of the drug supply with this adulterant,” Winstead said.

According to the CDC Synthetic Opioid Data Report, drug dealers often lace fentanyl into their supply of heroin to increase its strength.

“It’s got a different kind of profile than heroin and so some people prefer that, but most people don’t want fentanyl in their drugs,” Winstead said.

Free test strips are available at the exchange for users to test their supply for the presence of fentanyl.

“They can make a decision about whether they’re going to change their behavior based on that knowledge,” Winstead said.

Recently, the Syringe Exchange received another grant of $28,000 from the national foundation AIDS United. This grant will give them money to hire a part-time site manager and move forward in expanding the program.

“I’m really excited that this might make the program more stable and it’ll reward the work that’s already being done,” Winstead said.

Some of the volunteers are Cal Poly students. They help maintain the program by showing up weekly to conduct prevention training and hand out supplies.

“They’ve really contributed to the success of the program, both from the research side and just from the keeping the program going side,” Winstead said. “They’re really saving lives.”

From  someone who has experienced the ups and downs of drug addiction and is now clean, Thole shared his advice.

“What I tell people is to engage in recovery. Don’t close any doors as far as recovery goes,” Thole said. “Don’t close any avenue, because you just never know how strong this thing is going to pull you.”