Put a ring on it: Being married in college

It was finals week of fall quarter. Students hustled to class with packages of scantrons. Two students in particular had a different agenda, an agenda that called for rescheduling exams and a timely hospital visit. While most of campus was sitting down in lecture halls and classrooms bubbling in answers to questions, Alex and Ransom Cutshall were expecting a baby boy named Bradley. And after that, a wedding.

“The biggest difference is definitely the fact that when you’re married, it’s all about the other person, or in my case, the other people. Whereas most students, you know, you only have to focus on yourself when you’re in college,” aerospace engineering junior, husband and father Ransom Cutshall said.

The married lifestyle can be vastly different from the traditional college lifestyle — it’s not just leaving home and experiencing the freedom of college like most students. It’s that and then some. It’s counter-cultural in that only a small amount of college students travel this road — National Center for Education 2008 statistics say approximately 18 percent of 20,928 undergraduates reported they were married.

But Ransom enjoys the nontraditional lifestyle.

“It’s amazing, it’s the best thing that ever happened. I don’t understand why more people aren’t married,” he said.

Though Ransom vouches for the benefits of being married in college, Cal Poly students don’t necessarily feel the same. According to a Mustang News survey conducted last month, only 17.8 percent of the 770 students who participated said they would get married in college.

This sentiment among college students is common. Many wait until after college to get married. In fact, the average ages for a woman to get married are 27-28, and men usually get married around age 29-30, said Kendra Williams, a marriage and family therapist and lecturer at Cal Poly.

Click on the hotspots in the graphic below to hear more student perspectives on the idea of being married in college. 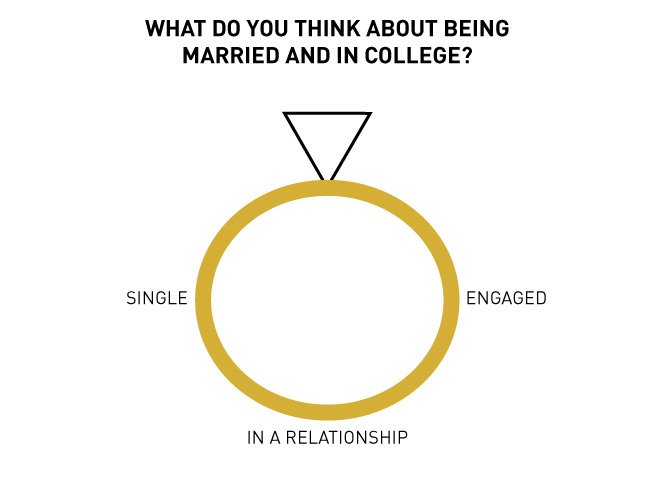 After the honeymoon stage: The ups and downs of being married in college

Liberal studies junior, wife and mother Alex Cutshall said she enjoys married life, but it has been challenging to balance her family, academics and social life.

“It’s pretty difficult. Sometimes you want the other person to do more work but then you think about ‘Oh well, I want them to have a good time too’ so I want to try to do as much as I can,” she said.

Ransom faces concerns of his own. Some universities offer family housing to students who are married or have children. However, there is currently no such housing offered to the Cutshalls, and living off-campus has not been ideal.

“Housing was a really mad scramble,” Ransom said. “The place we’re at now is ok, but it’s definitely not the best. It would have made it a lot easier if they offered some sort of … family housing.”

Cal Poly’s Master Plan may include residential neighborhoods that provide space for nonstudents and nontraditional students, such as student families like the Cutshalls as well as faculty, staff and graduate students.

Another issue married college students may need to face deals more with emotions within a college atmosphere.

“When you bring someone into a marriage, it’s a contract. This isn’t dating anymore,” Williams said. “Now you have two people that are in an environment like college where they’re exploring and developing – and are they doing that together? Or are they finding themselves maybe being driven apart by those differences?”

For Alex, the commitment is effortless. She still gets some of the perks of living like a college kid, watching TV and eating junk food, but now gets to do it with two people who love her unconditionally — her husband and her child.

“I love that I get to hang out with my husband and my baby. He comes home and I get to do all of the fun things I would do by myself, like binge watch a TV show,” Alex said. “There’s some times when you just want a little personal space, like I don’t want him to know how many cookies I’m eating or how many chips I had … I feel like if this person loves you, they won’t judge you for that.”

That’s getting the best of both worlds.